Home Culture The Man with the Bomb

The Man with the Bomb 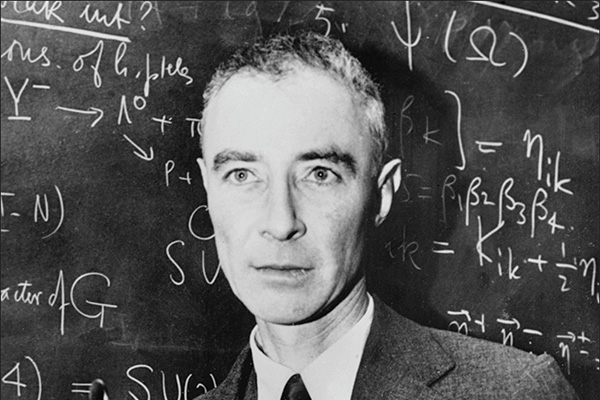 Why Robert Oppenheimer haunts us still.

[dropcap]R[/dropcap]obert Oppenheimer oversaw the design and construction of the first atomic bombs. The American theoretical physicist wasn’t the only one involved—more than 130,000 people contributed their skills to the World War II Manhattan Project, from construction workers to explosives experts to Soviet spies—but his name survives uniquely in popular memory as the names of the other participants fade. British philosopher Ray Monk’s lengthy new biography of the man, Robert Oppenheimer: A Life Inside the Center, is only the most recent of several to appear, and Oppenheimer wins significant assessment in every history of the Manhattan Project, including my own. Why this one man should have come to stand for the whole huge business, then, is the essential question any biographer must answer.

It’s not as if the bomb program were bereft of men of distinction. Gen. Leslie Groves built the Pentagon and thousands of other U.S. military installations before leading the entire Manhattan Project to success in record time. Hans Bethe discovered the sequence of thermonuclear reactions that fire the stars. Leo Szilard and Enrico Fermi invented the nuclear reactor. John von Neumann conceived the stored-program digital computer. Edward Teller and Stanislaw Ulam co-invented the hydrogen bomb. Luis Alvarez devised a whole new technology for detonating explosives to make the Fat Man bomb work, and later, with his son, Walter, proved that an Earth-impacting asteroid killed off the dinosaurs. The list goes on. What was so special about Oppenheimer?

He was brilliant, rich, handsome, and charismatic. Women adored him. As a young professor at Berkeley and Caltech in the 1930s, he broke the European monopoly on theoretical physics, contributing significantly to making America a physics powerhouse that continues to win a freight of Nobel Prizes. Despite never having directed any organization before, he led the Los Alamos bomb laboratory with such skill that even his worst enemy, Edward Teller, told me once that Oppenheimer was the best lab director he’d ever known. After the war, he led the group of scientists who guided American nuclear policy, the General Advisory Committee to the U.S. Atomic Energy Commission. He finished out his life as director of the prestigious Institute for Advanced Study in Princeton, New Jersey, where he welcomed young scientists and scholars into that traditionally aloof club.

Those were exceptional achievements, but they don’t by themselves explain his unique place in nuclear history. For that, add in the dark side. His brilliance came with a casual cruelty, born certainly of insecurity, which lashed out with invective against anyone who said anything he considered stupid; even the brilliant Bethe wasn’t exempt. His relationships with the significant women in his life were destructive: his first deep love, Jean Tatlock, the daughter of a Berkeley professor, was a suicide; his wife, Kitty, a lifelong alcoholic. His daughter committed suicide; his son continues to live an isolated life.

Actor that he was, Oppenheimer could fit himself to almost any role, but turned abject or imperious when threatened.

Oppenheimer’s achievements as a theoretical physicist never reached the level his brilliance seemed to promise; the reason, his student and later Nobel laureate Julian Schwinger judged, was that he “very much insisted on displaying that he was on top of everything”—a polite way of saying Oppenheimer was glib. The physicist Isidor Rabi, a Nobel laureate colleague whom Oppenheimer deeply respected, thought he attributed too much mystery to the workings of nature. Monk notes his curiously uncritical respect for the received wisdom of his field.

Monk’s discussion of Oppenheimer’s work in physics is one of his book’s great contributions to the saga, an area of the man’s life that previous biographies have neglected. In the late 1920s, Oppenheimer first worked out the physics of what came to be called black holes, those collapsing giant stars that pull even light in behind them as they shrink to solar-system or even planetary size. Some have speculated Oppenheimer might have won a Nobel for that work had he lived to see the first black hole identified in 1971.

Oppenheimer’s patriotism should have been evident to even the most obtuse government critic. He gave up his beloved physics, after all, not to mention any vestige of personal privacy, to help make his country invulnerable with atomic bombs. Yet he risked his work and reputation by dabbling in leftwing and communist politics before the war and lying to security officers during the war about a solicitation to espionage he received. His choices or mistakes, combined with his penchant for humiliating lesser men, eventually destroyed him.

One of those lesser men, a vicious piece of work named Lewis Strauss, a former shoe salesman turned Wall Street financier and physicist manqué, was the vehicle of Oppenheimer’s destruction. When President Eisenhower appointed Strauss to the chairmanship of the AEC in the summer of 1953, Strauss pieced together a case against Oppenheimer. He was still splenetic from an extended Oppenheimer drubbing delivered during a congressional hearing all the way back in 1948, and he believed the physicist was a Soviet spy.

Strauss proceeded to revoke Oppenheimer’s security clearance, effectively shutting him out of government. Oppenheimer could have accepted his fate and returned to an academic life filled with honors; he was due to be dropped as an AEC consultant anyway. He chose instead to fight the charges. Strauss found a brutal prosecuting attorney to question the scientist, bugged his communications with his attorney, and stalled giving the attorney the clearances he needed to vet the charges. The transcript of the hearing In the Matter of J. Robert Oppenheimer is one of the great, dark documents of the early atomic age, almost Shakespearean in its craven parade of hostile witnesses through the government star chamber, with the victim himself, catatonic with shame, sunken on a couch incessantly smoking the cigarettes that would kill him with throat cancer at 63 in 1967.

Rabi was one of the few witnesses who stood up for his friend, finally challenging the hearing board in exasperation, “We have an A-bomb and a whole series of it [because of Oppenheimer’s work], and what more do you want, mermaids?” What Strauss and others, particularly Edward Teller, wanted was Oppenheimer’s head on a platter, and they got it. The public humiliation, which he called “my train wreck,” destroyed him. Those who knew him best have told me sadly that he was never the same again.

For Monk as for Rabi, Oppenheimer’s central problem was his hollow core, his false sense of self, which Rabi with characteristic wit framed as an inability to decide whether he wanted to be president of the Knights of Columbus or B’nai B’rith. The German Jews who were Oppenheimer’s 19th-century forebears had worked hard at assimilation—that is, at denying their religious heritage. Oppenheimer’s parents submerged that heritage further in New York’s ethical-culture movement that salvaged the humanism of Judaism while scrapping the supernatural overburden. Oppenheimer, actor that he was, could fit himself to almost any role, but turned either abject or imperious when threatened. He was a great lab director at Los Alamos because of his intelligence—“He was much smarter than the rest of us,” Bethe told me—because of his broad knowledge and culture; because of his psychological insight into the complicated personalities of the gifted men assembled there to work on the bomb; most of all because he decided to play that role, as a patriotic citizen, and played it superbly.

His flirtation with communism spoke more of a rich esthete’s awakening to the suffering in the world than his political convictions.

Monk is a levelheaded and congenial guide to Oppenheimer’s life, his biography certainly the best that has yet come along. But he devotes far too many pages to Oppenheimer’s Depression-era flirtation with communism, a dead letter long ago and one that speaks more of a rich esthete’s awakening to the suffering in the world than to Oppenheimer’s political convictions. He doesn’t always get the science right. Most of the errors are trivial, but a few are important to the story.

A fundamental reason Oppenheimer opposed a crash program to develop the hydrogen bomb in response to the first Soviet atomic-bomb test in 1949 was the requirement of Edward Teller’s “Super” design for large amounts of a rare isotope of hydrogen, tritium. Tritium is bred by irradiating lithium in a nuclear reactor, but the slugs of lithium take up space that would otherwise be devoted to breeding plutonium. To make tritium for a hydrogen bomb that the U.S. did not know how to build would have required sacrificing most of the U.S. production of plutonium for devastating atomic bombs the U.S. did know how to build. To Oppenheimer and the other scientists on the GAC, such an irresponsible substitution as an answer to the Soviet bomb made no strategic sense. It’s true that the hydrogen bomb with its potentially unlimited scale of destruction made no military sense to them either—and was morally repugnant to some of them as well. But their fundamental objection, which Monk overlooks, was to giving up production of real weapons so that Teller could pursue his pipedream, a dead-end hydrogen bomb design that never worked.

More egregious is Monk’s notion that the Danish physicist Niels Bohr, Oppenheimer’s mentor during the war on the international implications of the new technology, pushed for the bomb’s use on Japan to make its terror manifest. He did not. He pushed, to the contrary, for the Allies, the Soviet Union included, to discuss the implications of the bomb prior to its use and to devise a framework for controlling it. Bohr foresaw that the bomb would stalemate major war, as it has, but correctly feared that U.S. secrecy about its development would lead to a U.S.-Soviet arms race. He conferred with both Roosevelt and Churchill about presenting the fact of the bomb to the Russians as a common danger to the world, like a new epidemic disease, that needed to be quarantined by common agreement. Churchill vehemently disagreed, and Roosevelt was old and ill. The moment passed. The arms race followed, as Bohr foresaw, and with diminished force, among pariah states like Iran and North Korea, continues to this day.

Monk’s Oppenheimer is a less appealing figure than the Oppenheimer of previous biographies, perhaps because, as an Englishman, Monk is less susceptible to Oppenheimer’s rhetorical gifts and more candid about calling out his evasions. He pulls together most of what several generations of Oppenheimer scholars have found and offers new revelations as well. Yet there’s a faint whiff of condescension in his portrait, and the real Oppenheimer, the man whom so many loved and admired, still somehow escapes him. He misses the deep alignment of Robert Oppenheimer’s life with Greek tragedy, the charismatic hubris that was his glory but also the flaw that brought him low. But maybe I’m expecting too much: maybe only a large work of fiction could assemble that critical mass.

Rhodes is the author of the Pulitzer–winning The Making of the Atomic Bomb and 23 other books. From our May 31, 2013, issue; The Man with the Bomb.