Home Culture The Many Talents of Carrie Fisher

The Many Talents of Carrie Fisher 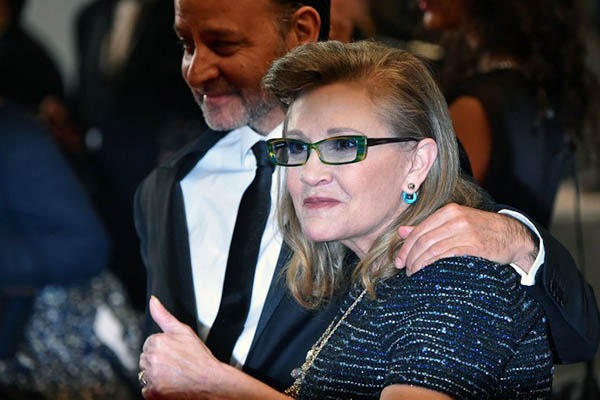 From ‘Star Wars’ heroine to author and script doctor.

Actress Carrie Fisher, best known for her portrayal of Princess Leia in the Star Wars films, died on Tuesday at age 60 after suffering a heart attack.

Fisher—who struggled with addiction in the 1980s—was also a screenwriter, author and speaker who had enjoyed something of a career a comeback in recent years.

Here is a summary of her career highlights:

Fisher became a household name after starring in the original trilogy of the Star Wars sci-fi franchise in which she played the beloved Princess Leia Organa.

Her other film credits include small roles in The Blues Brothers, The Man with One Red Shoe, Woody Allen’s Hannah and Her Sisters, Appointment with Death, Soapdish and When Harry Met Sally. She also had roles in a number of television movies including These Old Broads, and Wright vs. Wrong, as well as TV series including The Big Bang Theory, Entourage, Sex and the City and Weeds.

Most recently, she had joined the cast of the Amazon series Catastrophe, playing Mia, the heinous mother of her co-star Rob Delaney.

Though many will remember her as Princess Leia, Fisher was one of the film industry’s most sought-after script doctors.

She was the unsung hero behind many movies that went on to box office success including Hook, Lethal Weapon 3, Sister Act, Scream 3, Outbreak, and the Star Wars prequels.

Beyond her acting career and success as a script doctor, Fisher was a bestselling author known for her semi-autobiographical novels in which she wrote about her struggles with drug abuse, mental illness and her complicated family history.

In Postcards from the Edge, first published in 1987 and later adapted into an Oscar-nominated movie, she satirized her own acting career, her battle with drug abuse and her relationship with mother Debbie Reynolds.

Fisher wrote several other novels, including Delusions of Grandma and Surrender the Pink. Wishful Drinking, which addresses with humor and candor her mental illness and drug abuse, was turned into a documentary.

Most recently, she was on a tour promoting her latest book The Princess Diarist, based on diaries she kept while filming Star Wars.

She revealed in the book that she had an affair with co-star Harrison Ford while on the set of Star Wars.

A memorial for Carrie Fisher has been set up at the poetry sharing site called Cosmofunnel. Please stop and pay your respects. https://cosmofunnel.com/contest/december-2016-contest-nominees