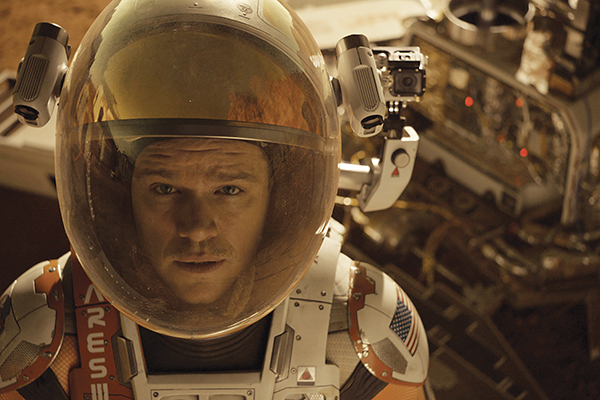 The Martian was on a planet of its own atop the North American box office charts, taking in an estimated $37 million over the weekend, industry data showed Sunday.

The critically acclaimed blockbuster starring Matt Damon as an astronaut stranded on Mars has now made $108.7 million in its first two weeks at number one, according to estimates from box office tracker Exhibitor Relations.

Hotel Transylvania 2 pulled in $20.3 million to hold onto second place for the second consecutive week, after leading the box office its first week out. The sequel, starring animated ghouls voiced by an all-star cast, has brought in $116.8 million in its three weeks on the big screen in the United States and Canada.

New release Pan was third in its opening weekend. The reimagining of Peter Pan’s story made $15.5 million over Friday, Saturday and Sunday—approximately one tenth of what Warner Bros. reportedly paid to make the fantasy blockbuster.

In its third week in theaters, The Intern, starring Robert De Niro as a 70-year-old interning for a fashion website founder, played by Anne Hathaway, held firm at fourth place with $8.7 million in box office receipts.

Sicario dropped to fifth place, taking in $7.4 million. The thriller features Benicio del Toro as a brooding and shadowy agent on a counter-narcotics task force along the U.S.-Mexico border.

The thriller Everest, in which a group of climbers find themselves engulfed in a blizzard on the side of the mountain, made just over $3 million, for ninth place. The Visit, M. Night Shyamalan’s low-budget thriller about a trip to grandma’s house gone awry, brought in $2.4 million in 10th place.

Ahead of its wider release this week and next, Steve Jobs, the biopic about the Apple co-founder, brought in just over half a million dollars this weekend, despite being released in just four theaters.