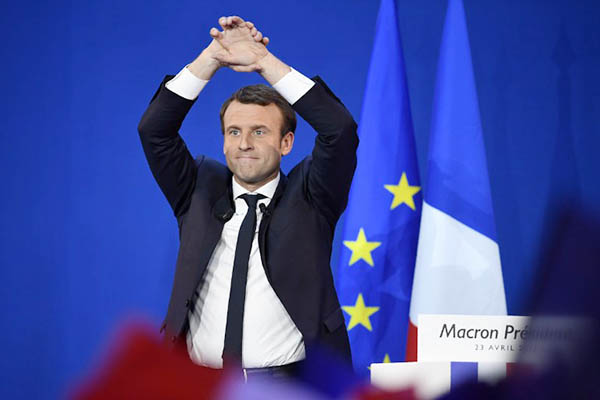 Emmanuel Macron is a centrist pro-European whose sensational political career, unorthodox marriage and promises to modernize France have made him a favorite for the presidency.

If he wins, the 39-year-old former banker would be the youngest French leader in modern history, upending tradition that has usually seen voters favor experience in their powerful presidents. Running in his first ever election, Macron was projected to win about 24 percent in the first round of the presidential poll on Sunday, guaranteeing him a place in the second round on May 7 against far-right National Front leader Marine Le Pen.

“We’re turning a page in French political history,” a jubilant Macron told AFP after the estimates were released.

Latest opinion polls out Sunday found that Macron would win about two thirds of the vote if the run-off was held today. His projected first round victory is a vindication of his decision to quit the government of unpopular Socialist President Francois Hollande in August to concentrate on building up his own centrist political movement “En Marche” (“On the Move”).

“We can’t respond with the same men and the same ideas,” Macron said as he launched his presidential bid in November at a jobs training center in a gritty Parisian suburb. Since then, he has rarely been out of the headlines, building up his movement to more than 250,000 members and confounding critics who said he would only appeal to a narrow band of young, urban professionals.

“In your name, I will be… the voice of hope for our country and for Europe,” he told cheering supporters on Sunday. “I want to be the president of the patriots against the threat of nationalists.”

With frustration at France’s political class running high, Macron has tapped into a desire for wholesale change that also propelled far-right candidate Le Pen into the second round. “I’m here because he’s young, he’s dynamic. It’s like a breath of fresh air,” 23-year-old shop worker Marine Gonidou told AFP at a rally in Brittany in January.

Although positioned as an outsider, the brilliant student followed a well-worn path through elite French universities including ENA, which has groomed many French leaders. After going into investment banking, where he earned several million euros at Rothschild, Macron became an economic adviser to Hollande in 2012 and then economy minister two years later.

Despite the efforts of his opponents, “he seems to have escaped his association with the government,” said Dominique Reynie, head of the Foundation for Political Innovation think-tank in Paris. Throughout the campaign he insisted that France was “contrarian”—ready to elect a pro-E.U., pro-globalization liberal at a time when rightwing nationalists are making gains across the world.

As well as wanting to improve the business environment, Macron stresses the need to boost education in deprived areas and has spoken out against stigmatizing Muslims with France’s strict rules on secularism. His championing of tech firms and the “Uber-ization” of the economy, in which people increasingly work as independents rather than as employees, has helped burnish his image as a modernizer.

“I want us to be able to start a business more easily, to innovate more easily” is one of his mantras, explained in depth in his pre-election book Revolution.

Opponents still dismiss him as deliberately vague, with Le Pen landing a blow during a televised debate in March when she attacked him for waffling. “Mr. Macron you have an amazing talent, you’ve spoken for seven minutes and I’m unable to resume your thinking. You’ve said nothing!” she said.

In politics as well as his personal life, Macron has also broken traditions. The theater lover from a middle-class family in northeast France fell in love with his secondary school drama teacher, Brigitte Trogneux, in a story that captivated the French media.

Trogneux, a mother of three children 25 years older than him, went on to divorce her husband and marry the young prodigy in 2007. “At the age of 17, Emmanuel said to me: ‘Whatever you do, I will marry you!’,” Trogneux told Paris Match magazine last April.

Some have found the relationship difficult to believe despite numerous appearances together in glossy magazines, forcing Macron to repeatedly laugh off rumors he is gay.

While at ease among ordinary voters and charismatic, Macron has been accused of being condescending in the past, whether referring to “illiterate” abattoir workers, “alcoholic” laid-off workers or the “poor people” who travel on buses. In an infamous exchange, when confronted by a protester in a T-shirt in May last year, he lost his cool, saying: “The best way to buy yourself a suit is to work.”