The Meteoric Rise and Fall of Anthony Scaramucci 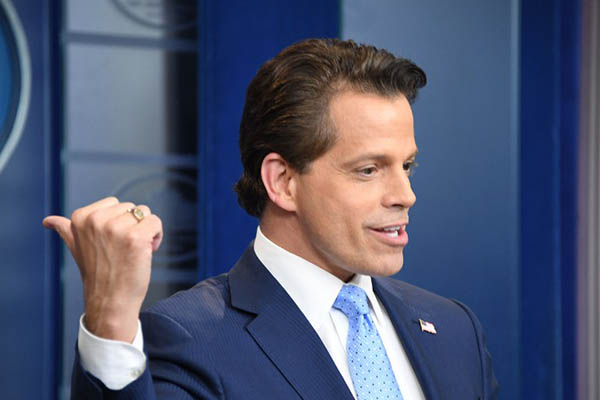 Ten days ago, Anthony Scaramucci—then newly named as White House communications director—dismissed reports of infighting in the West Wing, saying that things were “on track.” On Monday, he was out of a job.

The following events trace the meteoric rise and fall of Scaramucci, a 53-year-old former hedge fund investor nicknamed the “Mooch”:

Anticipating a role in the incoming administration of then president-elect Donald Trump, Scaramucci moves to avoid any potential conflict of interest by selling his stake in his global investment firm, SkyBridge Capital.

Scaramucci is blocked from a White House position, however, by Trump’s chief of staff Reince Priebus and chief strategist Steve Bannon, both of whom were reportedly not overly fond of the brash Wall Street financier.

After six months out in the cold, Scaramucci finally gets a White House post. He is named communications director on July 21 of a White House that is beset by open feuding and leaks, and seeking to counter charges it is in disarray.

Asked about his relations with Priebus, Scaramucci says he’s a “dear friend” and the two are “a little bit like brothers where we rough each other up once in a while.” He later compares them to Cain and Abel.

Scaramucci may have sealed his fate in a now infamous interview he did with The New Yorker less than a week after being named to the White House job.

In an expletive-laden rant, Scaramucci called Priebus a “paranoid schizophrenic” and accused Bannon of serving in the White House just to “build [his] own brand.” Scaramucci also predicted that Priebus would be forced to resign—which he indeed did two days later.

Scaramucci did not apologize for the tirade, but said he would try to clean up his language in the future. “I sometimes use colorful language. I will refrain in this arena but not give up the passionate fight for @realDonaldTrump’s agenda,” he tweeted.

Scaramucci is ousted just as the new White House chief of staff John Kelly, a no-nonsense former Marine Corps general named to replace Priebus, takes charge. “Mr. Scaramucci felt it was best to give Chief of Staff John Kelly a clean slate and the ability to build his own team. We wish him all the best,” the White House said in a terse statement.

When asked about Scaramucci’s departure on Monday, Sanders refused to be drawn about the details, but did say that Trump believed his remarks to The New Yorker were “inappropriate.” She declined to elaborate.