Home Lightbox The Morning After 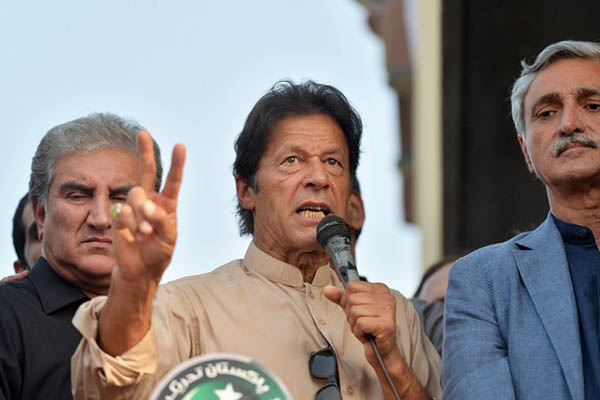 The PTI’s latest dharna fizzled out before it even started.

Imran Khan’s “dharna to the end” against Prime Minister Nawaz Sharif actually ended before it even began on Nov. 1. Standing in front of his Bani Gala home, Khan announced a day of “thanksgiving” instead, claiming the Supreme Court’s decision to accept the Panama Papers corruption case would “inevitably” deliver justice and unseat Sharif. This is, at best, wishful thinking.

The dharna—normally a sit-in where you do nothing—had initially threatened a shutdown of Islamabad on Nov. 2 with a million-strong army of PTI activists. After Khan called it off, it looked like a repeat of his 2014 reversal when he returned home after 126 days on the streets. One could see defeat on the glum faces of the lieutenants flanking him. By most estimates, only a few thousand PTI activists had gathered in the capital ahead of the dharna. Even Asad Umar, Islamabad’s PTI leader with 28,000 supporters in the city, had failed to muster them.

The ruling PMLN had blocked all roads leading to Islamabad with containers filled with to-be-exported goods that must have cost billions to the economy. This effectively barred most protesters from joining Khan. But even without the barriers, the PTI chief was unrealistic: one million people couldn’t be mobilized in days or weeks. The march to Islamabad from all corners of the country should have begun a month earlier. Instead, all the PTI had to show for its efforts was Khyber-Pakhtunkhwa Chief Minister Pervez Khattak leading a few hundred bedraggled “commandos” from Peshawar, who retreated soon enough in the face of teargas shelling.

The newspapers wrote “balanced” editorials, criticizing both parties. Dr. Arif Alvi, the leftwing PTI MNA from Karachi, wrongly compared the dharna to protests in Venezuela against a socialist government that had allowed the oil-rich country to go bankrupt. (The same day, Standard & Poor’s hailed Pakistan’s economic performance by elevating its long-term credit rating from ‘B-’ to ‘B’ category.) The PPP’s Rehman Malik thought the dharna was called off because the “khakis” had dictated yet another retreat. Only daily Express Tribune found Khan’s methodology and strategy “deeply flawed.”

It’s time the PTI did some navel-gazing. It has lured the entire nation into a discourse of violence. The party can’t go on spending colossal amounts of money mobilizing mobs that end up achieving nothing. PTI’s top leaders should develop the capacity of critically advising a leader more used to consulting clairvoyants than good sense.