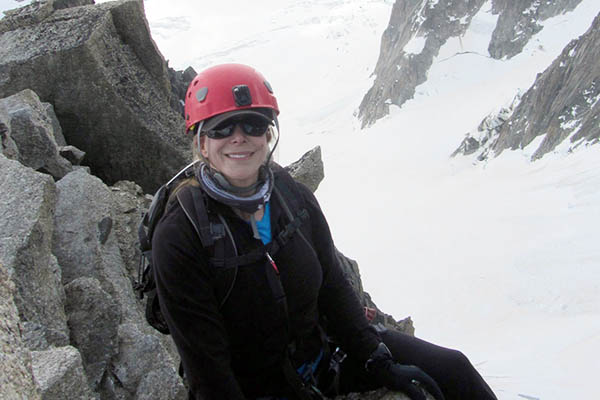 Vanessa O’Brien traveled to Pakistan to climb K-2, but found herself in a far more welcoming place than she had imagined.

When mountaineer Vanessa O’Brien arrived in Islamabad, she expected to find a dusty, dry city full of veiled women and unsavory men. Instead, the 50-year-old found that unlike Hollywood’s depictions of Pakistan’s capital, the reality featured a clean environment, lavish greenery, and, above all, a hospitable people who went out of their way to help her.

“Pakistan is a beautiful country,” O’Brien told Newsweek last month. “Its people are hospitable and have a good sense of humor. I came here with a lot of misconceptions and it was very different than what I was expecting to be.”

A dual citizen of the United States and Britain, O’Brien was in Pakistan to hoist the flags of her countries, along with that of Pakistan, atop the second-highest mountain in the world, K-2. “It would have been a really great show of solidarity, friendship and unity” to hoist all three flags simultaneously, said O’Brien. Unfortunately for O’Brien, her plans were dashed by this year’s torrential rains, which prevented the annual K-2 summit from proceeding as planned due to a higher risk of avalanches.

“There were a few accidents—broken arms, dislocated shoulders—requiring helicopter rescues,” says O’Brien of her truncated K-2 expedition. While she has climbed Mt. Everest, O’Brien says K-2 is in many ways much tougher to traverse. “It is very vertical. It demands a lot more from mountaineers,” she says.

The Pakistan Army operates regular sorties for injured and trapped mountaineers at K-2’s base camp. O’Brien says that while she was not injured, she paid to travel on an Army helicopter from the base camp to Skardu to save “precious” time. “They are the real heroes, because they fly in conditions where no one else does,” she says, adding that it would have taken her six days to hike out of the troubled area on foot. “I also like their slogan ‘We fly where the mountains touch the skies’,” she laughs. “They [army aviation] are involved in a very serious business. It’s life and death [up there]. They rescue people in extreme pain, especially when there are internal injuries. These are extreme high altitude sickness cases which sometimes necessitate urgent rescues.”

The 50-year-old worked as a finance director at the Bank of America’s credit card division before the global recession of 2009. When the economy tumbled, O’Brien felt it was time to “make a change” from climbing the corporate ladder. “I wanted to do something tough and goal-oriented,” says O’Brien, “and a friend jokingly suggested I should climb Everest.” Having no prior climbing experience, O’Brien laughed off the suggestion, but the idea stuck. She spent the next two years training to climb Everest and finally reached the summit in May 2012. She didn’t stop there.

“I went on to complete seven summits in 295 days, which brought me into the 2015 Guinness World Records for shortest time [taken] for female,” said O’Brien adding, “I became the shortest female record for the Explorers Grand Slam—7 summits plus two poles in 11 months.” And while she was unable to scale K-2 this year, she says she has not given up. “I don’t believe the summit attempt is necessarily a failure. Collecting data and information about that mountain and the conditions, location is very worthwhile. I have more information, knowledge and data than I had before.”

Comparing Pakistan to Nepal, where she spent a lot of time ahead of scaling Everest, O’Brien says conditions are much more favorable to climbers. “Its really nice that they [Pakistan Army] have the expertise, the helicopters and experience to pick up the wounded and the Combined Military Hospital at Skardu has far better resources and care for the wounded.”

Despite this, O’Brien says she was discouraged from traveling to Pakistan due to security concerns. “People [in the U.S.] don’t understand the situation in Pakistan, because a lot them are confused about geography,” she says. “They have trouble differentiating between trouble spots in Pakistan and Afghanistan. [I had to convince them] that the Islamic State is not the same as the Taliban, and Syria is very much not Pakistan,” she added.

Despite the preferable conditions in Pakistan, O’Brien says there’s always room for improvement. Islamabad should improve its infrastructure and expand flight schedules to help attract more tourists. “People should give Pakistan a chance and not rely on media for all their information,” she says. “Talk to Pakistani friends, talk to the people who have been there.”

For now, O’Brien is back home. But she didn’t return empty-handed. “I bought a shalwar kameez while I was in Pakistan,” she says. “Its quite unique to Pakistan and so feminine—and it looks good on everyone,” she says. “There are so many different colors and styles and it was a nice thing to buy.”