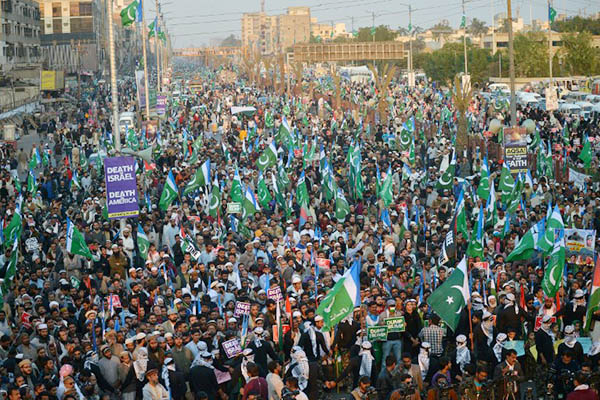 Activists of Jamaat-e-Islami gather during an anti-U.S. and anti-Israel protest in Karachi on Dec. 17, 2017. Rizwan Tabassum—AFP

Pakistan is increasingly forcing its minorities to become lesser citizens

Judges all over the world tend to be conservative, but in Pakistan we have a radical-conservative judiciary that intends to make the country “hard” for non-Muslims and discriminated sects. The radical-Islamic judge today is the Islamabad High Court’s Justice Shaukat Aziz Siddiqui, who wants anyone taking a government job to declare his faith in addition to his citizenship. He is clever too.

Justice Siddiqui has latched on to the “contradictions” of a gradually Islamizing Constitution and declared first that “the Constitution grants complete religious freedom, including all the basic rights of the non-Muslims” and that the state is bound to “protect their life, wealth, property, dignity and protect their assets as citizens of Pakistan.” After that he drops the bombshell: “Article 5 of the Constitution demands that citizens remain faithful to the state and abide by the rules of law and Constitution.” This he has taken to mean that all citizens declare their faith.

It is now mandatory to declare “true faith”; failure to do so could make one guilty of “betraying the State” and “exploiting the Constitution.” Also, citizens’ faith should be mentioned on birth certificates, ID cards, voters’ lists and passports. And please take a fresh oath of religion when joining the civil service, armed forces or the judiciary. To top it all, all teachers of Islamiat and Religious Studies should be Muslims. Justice Siddiqui also gifted the following pearl of wisdom to the nation: “it is alarming that one of the minorities was often mistaken for being Muslims due to their names and general attire.” Who is targeted? The already persecuted Pakistani Christians.

Being Pakistani gives you equal rights; saying “Muslim first”—ex-interior minister Chaudhry Nisar Ali Khan once said it in Parliament—targets non-Muslims and makes them unequal. When Indian Muslim evangelist Zakir Naik went to the U.K. and told Muslims there to declare themselves “Muslim first” and thus render themselves “unequal” he was asked to leave. But in Pakistan we want the non-Muslims and those forcibly made non-Muslims to become lesser citizens.

As far I know Pakistan was created based on religion of Islam, unlike India, so what is wrong if the Govt demand to know your religion as long as you are not faking one.

In sum Pakistan is for Muslims only.others who follow other faith can go to blazes, for al you care!