Home Lightbox The Nekokara Case and Some Questions

The Nekokara Case and Some Questions 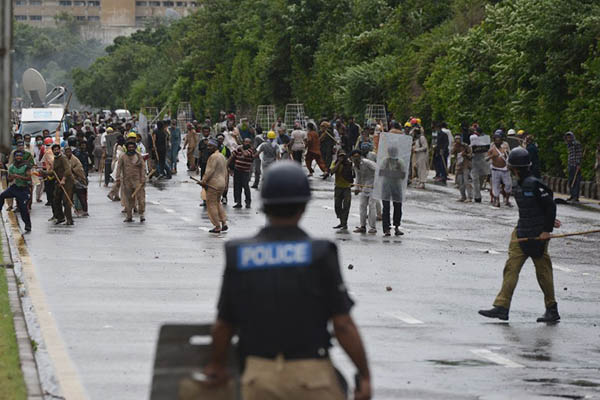 Why did the Establishment Division dismiss a well-regarded Islamabad Police official?

The Establishment Division, part of the Pakistan government’s Cabinet Secretariat, dismissed Muhammad Ali Nekokara, the now former Senior Superintendent of Police, Islamabad, on March 31. The dismissal notice reads as such notices do, using official argot, invoking rule-this and rule-that. The “Establishment Secretary/Authority has been pleased,” this particular notice reads, “to impose the major penalty of ‘Dismissal from Service’ … with immediate effect on the grounds of proven charges constituting ‘inefficiency and misconduct.’”

The insipidity of the language would be occasion for some fun if the punishment meted out to Nekokara weren’t so arbitrary and unjust. What got him guillotined?

The claims against Nekokara are serious, but, based on the evidence available with Newsweek, not accurate. If anything, Nekokara acted professionally, to the best of his ability, and conducted himself lawfully at all times, including when he requested to be transferred. The Nekokara case links up with larger questions related to the police, the bureaucracy in general, and the way in which the business of state is decided and conducted. This is what makes the story important.

The Nekokara saga begins with the decision by the Pakistan Tehreek-e-Insaf and Pakistan Awami Tehreek to assemble their cadres in Islamabad to force Prime Minister Nawaz Sharif into resigning and holding new elections. In Islamabad during those heady days, weeks and months, the median strength of the crowds gathered by the two opposition parties was around 30,000. The protesters were charged. Their leaders were instigating them and issuing warnings to and asking police personnel to mutiny. Equally, while they chose to target the police, they praised the Army and Rangers. Live scenes broadcast from the Red Zone testify to the fact that even as their cadres were prepared to beat policemen, they would stop at and disperse at the slightest rising hand of a single man from the Army or Rangers.

It was a deliberate and coordinated policy. What it did was to put immense pressure on the police, a disparate force drawn from the Punjab, the constabulary, Kashmir police and Islamabad Capital Territory cadre, including personnel from Islamabad Traffic Police. As Senior Superintendant of Police Operations, Nekokara was to make use of this force, largely lacking interoperability, to perform his functions and ensure security of the Red Zone.

On Aug. 27, 2014, Nekokara’s office issued a directive on the “Use of Force/Chain of Command on law and Order Duty at PAT and PTI Protestor [sic].” It read: “You are directed not to use batten [sic] charge, tear gas or live fire at the protesters without fulfilling the due legal process and the explicit directions of undersigned. All of you are strictly directed to follow these instructions in letter and spirit.”

A day before, Nekokara had given his assessment to the Interior Secretary at a meeting and subsequently sent this text message: “Sir, further to our meeting, while I am committed to protecting lives, I regret I will not be able to use force against the protesters mainly because I am convinced that (a) it will lead to killings and a tragedy similar to or worse than Model Town, and (b) it will backfire and be more disadvantageous for our democratic system. In view of the foregoing, if deemed appropriate, I can submit an application for leave.”

On Aug. 31, Nekokara wrote to the Inspector-General of Islamabad Police: “Sir, in my meeting with the Secretary Interior dated 26th August in his office and my subsequent SMS to him, and to you, the same day, I regretted that I will not be able to use force against the protesters … I was assured [the] next day that no use of force will be required. This was followed by my written orders to all … not to use force without following the chain of command and due legal process. Last night, decision to use force was taken which has caused loss to the people as well as the police. I feel continued use of force will lead to even more loss. This policy is beneficial neither for the public nor for the police in the given situation … I, therefore, request you once again to post me out.”

The I.G. wrote back saying that the “primary duty of the police is to maintain law and order within the area of responsibility.” He also said that Islamabad Police had followed the policy of non-use of force until the “mob of PAT/PTI moved towards sensitive buildings.” The force “acted under the provisions of 14.56 of Police Rules, 1934, which allows [the] police officer at the spot to take action/use force to disperse the protesters.” The letter then asked Nekokara to “kindly perform your duties in accordance with the Police Rules and law.”

However, while the I.G. instructed Nekokara to continue performing his duties, an Office Memorandum no. 3/30/2013-ICT.I marked “Most Immediate” from the Establishment Division and faxed to eight different offices read that “the services of Mr. Muhammad Ali Nekokara, (PSP/BS-19), presently posted as SSP (Operation) Police, Islamabad [are] hereby surrendered to Establishment Division with immediate effect. It is requested that a suitable substitute may be provided at the earliest.” This was also the beginning of the proceedings against Nekokara.

An Establishment Division letter dated Sept. 12 accused him of abdicating responsibility and demoralizing his force and called on him to explain his conduct. Nekokara replied three days later, denying that he had abdicated responsibility. He explained that he had (a) given his professional view of the ground situation, (b) opposed the use of force on that basis, (c) but used force when asked to do so, and (d) asked to be posted out, fearing that the recourse to use force will only worsen the situation, run as it did contrary to his assessment of the situation.

Nekokara’s stance in that reply, as also since then in subsequent exchanges, has been—and it is borne out by evidence—that it was his duty as a professional to give his assessment but that despite his professional evaluation, he did use force when explicitly ordered to do so. Both assertions are correct. In fact, the police charges filed by PAT and PTI are evidence of that. Nekokara’s name is listed in the FIRs.

Also, he requested to be posted out using accepted channels and while the I.G.’s office asked him to continue serving in his post, it was the Establishment Division’s memo that relieved him of his responsibilities. Corollary: At no point did Nekokara abdicate his responsibility or relinquish charge.

What are the responsibilities of a police officer? In the case of Model Town, where the police used force, perhaps excessively, policemen are behind bars and facing murder charges. In this case, where Nekokara advised against the use of force, he has been charged with ‘inefficiency and misconduct’ and dismissed from service. Clearly, the police are either failing-deadly or failing-impotent. There are reasons for that.

The Army and Rangers had no threat from the mob. The police was being castigated, abused, threatened, and even beaten up by the crowds. The political leaders who were doing this remain free and no charges have been brought against them for willfully breaking laws. It is easy for the Interior Ministry and/or the Establishment Division, as also the I.G.’s office, to order an officer and his men in the field to follow rules. But the actual action has to be taken by those on the ground. What protections do they have?

There is now enough evidence that PTI and PAT were embarked on a deliberate policy to create chaos. They were making political demands and the situation could best be handled politically. Yet, despite the terribly tricky situation for the police, the political and bureaucratic bosses expected the force to deliver magic for them: dispersing the crowds in a way that would be painless when the crowds were hell-bent on creating a spectacle. Perhaps the Establishment Division can inform us in the larger interest of this country how to manage such a miracle. I suspect though that they have no answer to that.

The I.G. at the time should have taken a stand for Nekokara. As commander, it was his job. Yet, he meekly allowed the Establishment Division to claim Nekokara’s scalp. The pusillanimity of senior police officers is one of the most important reasons for the way the police are kicked around. The government should have pressed charges against political leaders instigating the police to mutiny. However, instead of appreciating the piranha-infested waters in which they had thrown the police, the government has decided to kill the career of an officer who, by all reports, is considered as professional and efficient.

How is the Establishment Division competent to assess the performance of the police? It possesses no expertise in matters related to the police and policing. Until we reorganize the police and make it an independent, professional body, the force will continue to remain useless. Given multiple internal-security challenges, the current state of inertia simply will not do. As things stand, unless a fair review is made of this case, it will result in demoralization of the police. Police officers have already written a letter addressed to all the inspectors-general of police stating this and much more. Irony has a way of being delicious. While Nekokara has been accused of demoralizing the force, it is in fact the government’s action of dismissing Nekokara that will end up doing just that.

PAT did not set out to attack anyone rather the Punjab government deployed police to attack the house of TUQ and PAT HQ, the police on the orders of the government killed 14 people including 2 women one of which was pregnant and injuured 90. Also why should Nekakora listen to orders of Shahbaz Sharif.