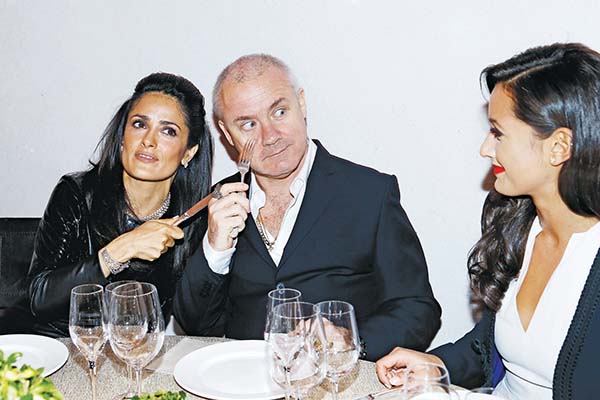 Celebrities are the new makers and breakers of the market. But are they patrons of the creative classes or just looking for a good investment?

[dropcap]F[/dropcap]irst there were artists. Then there were patrons—rich people with enough good taste that they enabled artists to live and make their art. Eventually, patrons made room for speculators, fake collectors who reap great sums by tinkering with expensive artists’ prices. But in the days of art as an asset (think luxury yachts, but also gold bullion and Apple Inc. stock) few collectors are as prized as a bona fide celebrity. Rare birds with pterodactyl-size tastes, their penchant for opulence, public display, and immediate gratification make them the ideal marks for today’s wheeling-and-dealing art galleries and auction houses. And then, of course, there’s also our 21st-century, celebrity-ravenous, hair-trigger media.

In late May that hunger had its True Blood incisors out at Christie’s sale of a beloved if bizarre 20th-century American gem: Bea Arthur Nude, a topless 1991 portrait of the late Golden Girls actress fashioned by 51-year-old American painter John Currin. Sold for $1.9 million on the same bullish evening that saw the auction house rake in a record $495 million, it garnered far more Gawker and gossip traffic than the auction’s $56.1 million Lichtenstein or $58.4 million Pollock canvases. The reason? In a phrase: the crack epidemic-like qualities of the global fame game. To paraphrase the tagline from the Twilight saga—when groupies live online forever, what do you really live for?

Driven not by the painting’s quality, its astronomical price, or the fact that Currin was a broke house painter when he brushed a starlet’s boobs onto Arthur’s body, the event nevertheless escalated from B-list celebrity Twitter twaddle into an international Internet sensation. It started when comedian Jeff Ross posted a photo of himself standing next to the Arthur painting (or a very good likeness of it) with the tweet “Biggest surprise of my life. Thank you @jimmykimmel the most generous guy in the world!”; Kimmel was subsequently thought to be unmasked as the painting’s mystery spendthrift. That is until Kimmel himself chimed in to deny purchasing Currin’s painting in the first place: “Contrary to ‘news’ reports, I didn’t buy the Bea Arthur painting—not even for @realjeffreyross—but I did buy the Mona Lisa Lampanelli.”

A massive media event that essentially turned out to be a PR hoax, Kimmel’s fictional art purchase illustrates a growing popular desire to see fame and art go fang in neck. A kind of mass-cult blood thirst that would love to democratize art according to vampire-movie boilerplate—where plot is essentially reduced to celebrity and hackneyed film formula—the momentary craze over Currin’s painting already appears to be gaining influence. As thoughtful news-gathering, Golden Girl-gate is a signal disgrace; but as a Web-led media eruption, it demonstrates, above all, a remarkably demotic development: namely, that the world is itching for a topless art one-liner on Jimmy Kimmel Live. Provided you’re into Currin’s painting or any other important work for art’s age-old subtleties, the idea proves a massive booby prize.

Whether Jimmy Kimmel did or did not spend nearly $2 million on Bea Arthur’s portrait is, strictly speaking, largely immaterial. After all, celebrities and art-world stars today air-kiss like champagne is going out of style. They do so, in fact, in every ritzy capital of the Gated Planet 1 Percent. Such soigné meetings occur seasonally in New York, Hong Kong, London, Dubai, Basel—even on waterlogged Italian piazzas in June. Witness the endless round robin of openings, lunches, dinners, cocktails, parties, and late-night socializing that characterized the recent preview for the Venice Biennale—the Oscars of the art world. A biannual event that gathers plane- and boat-loads of artists, curators, and gallerists, as well as yacht-borne flotillas of celebrities, politicians, and Fortune magazine boldface names, the 118-year-old art festival is a revolving door of powerhouse events that genuinely rivals the Academy Awards for unabashed glitz, glamour, and power tripping.

Take this year’s festival, the largest ever in the history of the biennale. It boasted, among many other private openings, hundreds of vernissages held for the 88 official national pavilions and the show’s proliferating ancillary exhibitions; a fête galante at Ca’ Corner, the 285-year-old palazzo purchased by fashion powerhouse Miuccia Prada to house her expansive art foundation; a star-studded dinner at François Pinault’s refurbished digs at Punta della Dogana, an old tax office the Gucci’s and Christie’s magnate converted into a contemporary art museum; and a gala supper on the island of San Lazzaro degli Armeni for U.S. conceptual artist Joseph Kosuth that was attended by actors Robert De Niro, Richard Gere, and Jeanne Moreau.

‘Virtually all of the celebrities we have dealt with come to the market thinking they know it all,’ says Thea Westreich says. ‘But some are open to reliable, certifiable information about art, which they learn to value. On the other hand, others simply are not.’

Celebrity sightings, as chronicled by dotcom oracles like LaineyGossip and Italia-online, continued unabated on a set of islands nearly sinking under the combined weight of art and money. These included Elton John, husband David Furnish, and their two children (seen, a catty barman told me, alternately bitching and making nice at the Gritti Palace Hotel); designers Karl Lagerfeld and Tom Ford (they strutted different ends of the Prada function); Milla Jovovich (she spent hours inside a plexiglass cube as a performance piece by model-artist Tara Subkoff); and Hillary Clinton (she was on hand, reportedly, to open a super-exclusive restaurant). The takeaway from this Bikini Atoll-like explosion of peacock feathers? It’s rather simple, really: despite the ongoing global recession, a tanking Italian economy, and significant cutbacks affecting myriad cultural institutions worldwide, relations between art’s superrich and the planet’s superfamous have apparently never been cozier.

Later, as a blood-red moon rose over Venice’s Campari-colored lagoon, many of these modern-day titans decamped to the ultimate batcave: ex-model Amy Sacco’s pop-up version of Bungalow 8, her New York club, neatly sited for the occasion at the Palazzina Grassi, a deluxe hotel. According to Sacco (and as confirmed by a wallet-pinching personal visit), the crowd was treacly with celebrities. Pinault and his raven-haired wife, the actress Salma Hayek, provided the inaugural toast. Leonardo DiCaprio joined them at their table. The billionaire, the actress, and the Great Gatsby star monster-mashed the night away, mingling with tabloid fodder like Peter and Harry Brant, Francesca von Habsburg, and Lola Schnabel. In a phrase, the scene was Baz Luhrmann in arty frocks. Also there, night in and night out: the artists Damien Hirst, Jessica Craig Martin, and Mark Fletcher; the auctioneer Tobias Myer; and, of course, the painter Currin and his wife, the sculptor Rachel Feinstein.

But if celebrities and art have made much stranger bedfellows in the past, what accounts for today’s attraction bordering on infatuation? The answer, I’m afraid, is mostly money—much of it of the bad sort that’s recklessly tossed in after good (Madonna’s collection, for example, is reportedly mostly made up of material-girl kitsch: art-deco sculptures, Damien Hirst dot paintings, and pictures by Tamara de Lempicka, trash just one degree removed from poster art). A group of especially impulsive über-consumers with palaces and penthouses for homes, 21st-century celebrities increasingly flock to art as a financial investment. In this way, entertainment, sports, and political boldface names prove no different than other high-net-worth individuals new to the art game. Buyers rather than collectors of art, they are just as likely to sell, or flip, a great work rather than steward it into a museum collection. Truth is most celebrities buy art like stocks—as much to sell as to keep. Only difference being, when they do so, they’re likely hiding behind a baseball cap, or a well-heeled adviser.

“There’s a lot of froth in the art market currently, which brings out buyers like celebrities. But just because one celebrity or half a dozen exhibit less than stellar taste, that doesn’t really affect the market.” That’s Thea Westreich, among the most well-heeled and experienced art advisers in the business. The high-flying head of Thea Westreich Art Advisory Services in New York, and recent author, with her husband Ethan Wagner, of the just released Collecting Art for Love, Money and More, Westreich is a professional who emphasizes the need for collectors to have a long-term relationship with art. A woman far too prudent to name famous names, she patiently explains that rather than being motivated by unique factors, celebrity collectors often act like arrogant newbies instead. “Virtually all of the celebrities we have dealt with come to the market thinking they know it all,” she says. “But some are open to reliable, certifiable information about art, which they learn to value. On the other hand, others simply are not.”

Still, to be a proper celebrity these days, it appears you need to acquire at least a few showy baubles. Word is that Brangelina are Banksy fans; DiCaprio, Jane Fonda, and Hugh Grant all have a soft spot for Warhol; Jay-Z owns works by Ed Ruscha, David Hammons, Laurie Simmons; and Elton John has a solid collection of photography (including masterpieces by Henri Cartier-Bresson, Diane Arbus, and Helmut Newton). Even the Beckhams have a Hirst, one of the artist’s heart-shaped canvases. But of all the celebrity purchases, none has been more newsworthy than Eric Clapton’s Gerhard Richter investment. The seller of the world’s most expensive artwork made by a living artist, Clapton walked away last year from Sotheby’s $34.2 million richer. With a 965 percent return on investment, he remains the poster boy for celebrity collecting—just as his flush exception confirms the rule against these kinds of spectacular gains.

Which means, in a nutshell, that the world’s best collectors, celebrities or not, still act like patrons—individuals who see themselves as supporters, guardians, and often protectors of artistic efforts that may well constitute the sort of patrimony one finds inside Venice’s Santa Maria della Salute church. Bea Arthur Nude belongs there, sheltered from the impulse to reduce art to a sideshow for anyone: be it the monied, the famous, the connected, or the merely celebrity obsessed. All of us—Jimmy Kimmel and Jeff Ross included—deserve a good long look at her disapproving Maude frown and her ridiculous nubile breasts.

Viveros-Faune writes criticism for The Village Voice, commentary for Art Review magazine and news and analysis for The Art Newspaper. From our June 28, 2013, issue.