Home Lightbox The New Face of the Punjab Police

The New Face of the Punjab Police 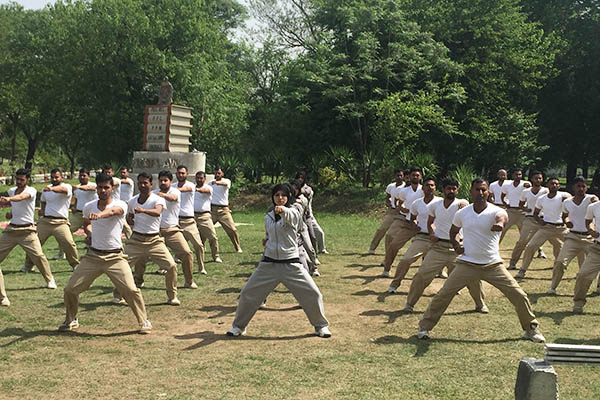 A new initiative to induct highly educated men and women into the controversial police force is already showing dividends.

The police in Pakistan’s Punjab province have had a tough go of it recently. Beset by corruption, accusations of staged ‘encounters’ and last year’s brutal assault on the offices of the Pakistan Awami Tehreek in Lahore that left 15 people dead and over 80 others injured, the organization’s image has been left tarnished. A new initiative introduced by Chief Minister Shahbaz Sharif aims to change that.

On a sunny April morning, men and women at the Sihala Police Academy in Rawalpindi are queued for drills. Clad in identical uniforms, the only way to differentiate between the cadets are the weapons they wield. The women are armed with the infamous AK-47 assault rifles, while the men are carrying the G-3 rifle. The instructor shouts out a command and the trainees immediately put on blindfolds. Another shout and they begin dismantling and reassembling the weapons. The entire exercise takes less than a minute.

“This is the first time in the history of Punjab that 76 women are among the 411 subinspectors hired for the police force,” says Sihala Police Academy Commandant Amir Zulfiqar Khan. “This batch includes a Ph.D. scholar, 22 M.Phil. graduates, 2 Chartered Accountants, 35 postgraduates, 17 M.B.A.s, and 31 engineers,” he adds proudly, noting that officers’ training starts at 6:15 a.m. each day and usually lasts until 11 p.m. The training started in August and should be completed by May. The officers will then spend an additional three months undergoing Elite Police training before being posted to police stations across the province.

Anam Saleem is one of the new inductees. A postgraduate in English Literature, she joined the force after her father was killed in the line of duty to “fulfill his dream.” She says the daily drills are essential for an efficient police force. “The idea behind dismantling and reassembling the rifle blindfolded is to always be prepared. Sometimes a bullet can get stuck inside the chamber, requiring on-the-spot disassembly. There is also the risk of criminals trying to flee custody by throwing pepper or dust in the police official’s eyes. We have to be trained to use the rifle even when blind.”

The 24-year-old says operating the assault rile is a very exciting experience. “When we talk to our friends outside the academy, they refuse to believe that we’re operating such sophisticated weaponry. Some of them have even asked for demos to prove our claims,” she laughs.

Saleem says she has not experienced any discrimination within the academy, but admits to concerns about working in such a male-dominated career. “I am not going to lose courage and will try to perform better than the men,” she said, adding that members of her community respected her decision.

A short distance from the rifle drills is another group of 26 men and six women. The trainees here are being taught martial arts. From defensive stances to standing jumps and even the barehanded destruction of marble slabs, they cover all the bases. “I love to kick,” says another new inductee, Sana Nazeer. The 23-year-old says they have been trained to avoid capture. “If someone grabs our neck, we hit the joints of their elbows,” she explains.

Nazeer also holds a postgraduate in English Literature and says it was difficult to opt for police service. “I joined the police because I want it to be seen positively by society. We are the first responders, so we have to win the people’s respect and trust,” she added. She said the martial arts training was specifically requested by the women. “Initially it was just for the boys, but we said we wanted to be properly trained too.”

Taimoor Ahmed Khan is one of the recently inducted men and has been training alongside the women. “It is good to work with them side-by-side because there are so many cases where the presence of a woman is absolutely essential,” he says. The 24-year-old hopes the success of these candidates will encourage other women to join as well. “We appreciate our fellow officers and seeing them working so hard helps boost our morale,” he says. “A few of us [men] thought some of the training exercises were too hard, but we were encouraged by the women, who never faltered.”

These men and women reflect the new face of the Punjab police, says Commandant Khan, adding that this is a “dream project” for both Chief Minister Sharif and Punjab Police Inspector-General Mushtaq Sukhera. Sukhera has even stated he hopes this initiative will help reform the police service and produce a higher caliber of officers. But Khan is aware of the long road ahead. Referring to the clash between police and PAT activists on June 17, 2014, he says that was a single incident and should be treated as such. “There are 180,000 officers in the Punjab Police; you can’t blame the entire force for the actions of those on the street that day.” He said the police were facing the brunt of terror attacks in recent years and did not get due credit for their sacrifices. The current training will introduce a police force with a new mindset, he adds.

“The basic focus of this training is to inculcate a belief that the police are the servants of the public, not their masters. This is what we stress from dawn to dusk,” he says.

The government has also hired two psychologists to monitor the mental state of the new officers. “Some young officers have issues related to anger, family stress, academy routing,” says Dr. Aqsa Safdar. “Although there has been no gender discrimination, some of the female trainees have expressed concerns they may not be able to perform all the exercises like the men,” she added. The psychologist said she and her colleague are helping the officers with stress, anger, and anxiety management.

Commandant Khan says he has been heartened by the recent inductions. “It speaks a lot about our society that even though any of these people could be killed tomorrow in the line of duty, they are still dedicated to their jobs as public servants.”

Been there, seen all.. Proud moment for Pakistan. Specially the way young girls have been trained its really impressive. Thumbs up! and proud that Punjab Govt is emphasizing on inducting female police officers.

Heartfelt congratulation to all the trainees for being part of the prestigious Police College Sihala and to the Commandant of the College for his wholesome dedicated efforts and pains taking to raise the standard and image of the College to this level that it found such a glorious mention in such a internationally recognised magazine. Wish all of them all the best in the life. Muhammad Altaf Qamar IGP(R)

Thank you very much, Sir Nazar UL Islam for your kind words. Your appreciation is meant a lot to me and all my collegues it will go long way to motivate us to keep doing good work

Thumbs up Punjab police for the commendable initiative, Let’s hope for best for a positive change in our police culture.

Need to replicate this model in Sind, Balochistan and KP.