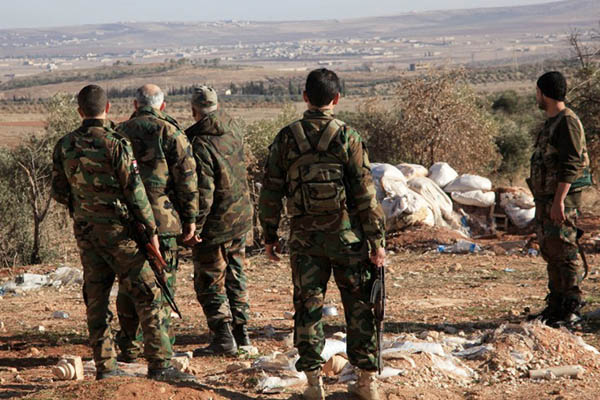 Six months ago, as the Islamic State ramped up atrocities across the world by targeting mosques and massacring civilians in territories under its control, elements of Pakistan’s Shia community decided to stop the extremists before they could solidify their presence in the country—by taking the fight to Syria’s war-torn streets.

“We were expecting a muted response, but found that many people are eager to travel to Syria and combat the Islamic State,” says a senior Shia elder who spoke on condition of anonymity. He says the community called for fighters through mosques in Shia-dominated regions in and around Khyber-Pakhtunkhwa province, especially Kurram Agency, Hangu district and provincial capital Peshawar, to build up its force. “Over 50 people approached us after our initial announcement and told us they were ready to fight,” he added.

Emboldened by the response, the elders decided that to ensure success, they would train their charges before deploying them to Syria through Iran, which he claims is sponsoring them. “It’s a very different war from the one we’re used to,” he told Newsweek. “In Afghanistan, we are fighting a guerrilla war [against the Taliban] and fighters primarily rely on improvised explosive devices. In Syria, however, battles are being fought on city streets and require fighters to be capable of operating small and heavy assault weapons with good aim and sharpshooting skills,” he added.

At least seven Pakistani Shias traveled to Syria via Iran in the first batch, according to locals. Five of them completed their training and joined the frontline, while two fell ill and had to pull back. Of the first five, four have been killed while the fifth’s condition is uncertain.

“This has demoralized people still wanting to reach Syria,” admits the elder. However, he adds, families of the deceased are being compensated by Tehran so they will be taken care of. A second batch of 15 people traveled to Iran in late October, he says, but it is unclear if they have made it to Syria.

A senior police official based in Peshawar told Newsweek that they were aware of some members of the Shia community traveling to Syria and had tried to stop them. “We took several people into custody,” he said on condition of anonymity. “But we can’t stop everyone from traveling to Iran. People from this region go there for pilgrimages often and we can’t assume everyone will slip into Syria and start fighting against I.S.”

A Reuters report from December claimed hundreds of Pakistanis were fighting against the Islamic State in Syria, and helping defend the government of President Bashar al-Assad, an Iranian ally. It claimed the group had become more centered and active around July 2015, which is when the Shia community in Pakistan was also encouraged to dispatch more fighters abroad.

The Government of Pakistan has acknowledged that there are I.S. sympathizers in the country, but maintains that the extremist group has no organized presence. Graffiti, banners and hate literature supporting I.S. has been found across Pakistan as far back as 2014. Last year, the counterterrorism department of Punjab Police arrested around 50 people suspected of links to I.S. with federal intelligence officials claiming they were investigating suspected extremists in Khyber-Pakhtunkhwa province. In December, Karachi police detained six women they alleged were recruiting other women on behalf of I.S. Three women and 12 children from Lahore are also believed to have fled to Syria to join the militants’ self-proclaimed caliphate.

Islamic State primarily recruits from extremist Sunnis, while Tehran’s proxies prefer hardline Shias. Recruitments on both sides have renewed the threat of sectarian unrest in Pakistan—as evidenced by a recent rise in militant attacks on the country’s minorities.

Over 20 people were killed and another 30 injured when a bomb ripped through a market in Kurram’s Parachinar in December. The anti-Shia Lashkar-e-Jhangvi claimed responsibility for the attack, adding it was retaliation for Iran and Syria’s “oppression” of Sunni Muslims. “We warn the parents of Parachinar. If they don’t stop their children from fighting [in Syria], they will face more attacks,” added a militant spokesman in a message to local media.

According to the Shia elder, potential combatants’ sponsors in Iran have discouraged more of them from traveling to Syria following tragedies like the Parachinar blast. The people of Kurram Agency and its adjoining regions have, instead, been told to defend their own homes, he says.

Some the people seeking glory on the battlefield have already returned. Rajab Ali* and Ali Khan* are two of the Shia Muslims who traveled to Iran last year to train for the fight against Islamic State. “We entered Iran via Balochistan and stayed there for 10 days,” says Kurram Agency’s Ali. “We wanted to complete our training before moving ahead to Syria to combat I.S. fighters,” he added.

However, both men were encouraged to return to Pakistan by their sponsors, who told them their services were needed back home. “They told us to use our training to defend ourselves and our people against anti-Shia forces [in Pakistan],” says Ali. “It was disappointing as we wanted to fight with our brothers in Syria, but we accepted their advice [and returned],” adds Khan.

Defense analyst Brig. (retd) Muhammad Saad says it is common for Iran to use proxies from other countries to fight its battles in Syria. “Several people from Kurram Agency are fighting against I.S. in Syria,” he says. “It’s not just Pakistan. Shia clerics from around the world, including Saudi Arabia, Bahrain, Syria, are close to the Shia hierarchy in Iran,” he added.

The analyst warned that the proxy wars between Sunni and Shia extremists in the Middle East could soon impact Pakistan if the government did not take action. “Recruitment for or against the Islamic State is very dangerous for Pakistan and can harm our internal security,” he said. Eventually, he warned, the survivors of these battles will return home. “All they’ll know is how to wage war,” he says, “which they will likely continue in Pakistan.”

*Names of returned fighters have been changed to protect their identities.

Before 1978 Pakistan was a stage for a relatively freedom of expression religionwise. Afghan war of 1980 crack the nation into two zealast groups. Extreme Sunni and Shias Big bear died but left its predator who looks for their piece of pie.

A very well balanced and well written story. The policy makers of this country should take it serious before its too late.