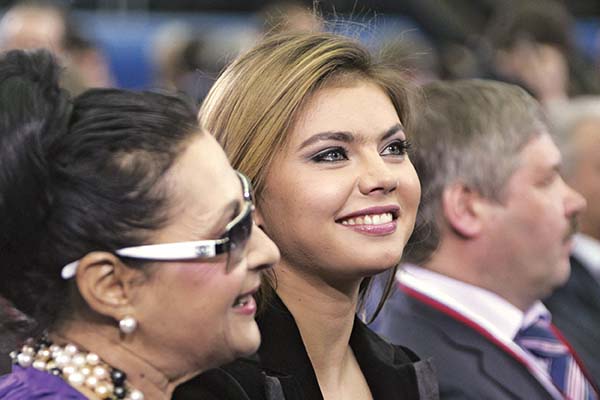 A growing role for the president’s rumored mistress.

The timing certainly seemed suspicious—days before Russian President Vladimir Putin and his wife, Lyudmila Putina, announced their divorce in a painfully clumsy televised interview, the state’s main television station broadcast a documentary paean to a beauty named Alina Kabaeva. A onetime Olympic gold-medal champion in rhythmic gymnastics and a parliamentary deputy in Russia’s Duma, Kabaeva has long been rumored to be Putin’s official mistress. The documentary, and its timing, seemed to confirm Kabaeva’s ascent—the hour-long film portrayed her as Russia’s queen, its main heroine, and a shining example for all modern Russian women. It praised Kabaeva for her feminine qualities, patriotism, and strong character, and for being a good example for little gymnasts, Russia’s future champions.

The former gymnast did not look as slim as when she could amaze entire stadiums with her flying jumps or her famous human knot; she did not look as smooth as in the Playboy photos published soon after the world first heard rumors of her secret romance with the Russian leader. But she still had her charming, open smile and a penetrating, firm gaze underneath her thick dark eyebrows. The documentary even trotted out Valentina Tereshkova, once Russia’s most famous woman as the first female astronaut in space and a fellow parliamentarian, who described Kabaeva as “a totally solid personality.”

Experts used to reading the tea leaves of Putin’s official pageantry claim the film was the president’s present for his beloved on her 30th birthday on May 12. A week later, the 60-year-old Putin and Lyudmila split, after many years of hiding the truth of their failing marriage. “One more birthday present for his little Alina,” gossiped users on an Internet forum. Another analyst and Kremlin critic, Stanislav Belkovsky, speculated that “Putin wants to appear at the Olympic opening with a new wife.”

If two decades ago it was Soviet dissidents who used allegorical language to hide the truth, today the Kremlin uses the same tactic of symbols and signs to point to events soon to come. In the documentary, Kabaeva—sweaty and tired after gym exercises—rejects the rumors of children with Putin and talks of risks she has taken, comparing her life to Jack London’s White Fang, “a strong wolf who fought to defend his territory and become strong.” In the past, pro-Kremlin youth movements used the image of a lonely wolf in their propaganda films about Putin. Will Kabaeva stay a lonely wolf, or will the two wolves make a couple?