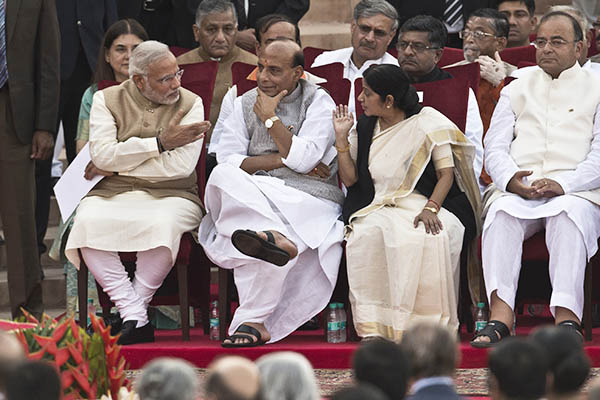 A list of the senior figures in Narendra Modi’s cabinet and their portfolios.

The following is a list of the senior figures in “Team Modi” who face sky-high expectations after the Hindu nationalist Bharatiya Janata Party (BJP) won the clearest mandate in the country for 30 years.

A successful corporate lawyer, Jaitley is the most powerful member of the new government after Modi, holding two vital and difficult portfolios. He served as commerce minister in a previous BJP government, which was in power 1998-2004.

In the last parliament, the 61-year-old was leader of the opposition in India’s upper house, winning a reputation as a forceful speaker and leading critic of the left-leaning Congress government. A longtime Modi ally, Jaitley provided one of the only items of bad news for the BJP on results day on May 16 when he lost what was supposed to be a safe seat in northwestern Punjab state.

The former vice president of India’s powerful cricket board describes himself as a “liberal political activist grounded in law, ethics and humanism.”

Jaitley said Tuesday he was aware he was taking over at a “challenging time” due to growth of under 5 percent and consumer inflation nearing double figures.

The BJP’s most influential woman, Swaraj is known as a strong and often humorous orator in her native Hindi language. She served as leader of the opposition in the lower house of the last parliament. Now 62, she became India’s youngest cabinet minister in 1977 after the end of Indira Gandhi’s emergency government and has handled the information, broadcasting and telecommunications portfolios since.

Swaraj was one of the few BJP leaders to oppose Modi’s elevation as the party’s prime ministerial candidate in September last year and Modi was once thought unlikely to give her a senior role. She will have to manage tricky relations with China, repair severe damage to U.S. relations provoked by the arrest of an Indian diplomat in December in New York, and handle a tough assignment on Pakistan.

BJP president and the highest-ranking member of the party, Singh is a former chief minister of northern Uttar Pradesh state who has previously served as a federal agriculture minister. Like Modi, 62-year-old Singh rose through the ranks of the RSS, a grassroots rightwing Hindu group closely linked to the BJP. He was a physics lecturer before becoming a politician.

Singh is prized by Modi as a good administrator and a key loyalist who will now manage the police and domestic intelligence agencies. His key challenges will be handling continued unrest in the Muslim-majority Himalayan territory of Kashmir, a Maoist insurgency in eastern and central India, as well as homegrown Islamist militant networks. Depending on Modi’s ambition, the under-paid, under-staffed and corruption-plagued police force might also be a target for reform.

Sanjeev Kumar Balyan was elected to the Indian parliament from the Muzaffarnagar area of Uttar Pradesh state, which was hit by deadly violence between Hindus and Muslims that displaced more than 50,000 Muslims last year.

Balyan, a doctor, faces charges for making inflammatory speeches that whipped up communal anger in the sugarcane belt of north India.

The cabinet includes just one Muslim, Najma Heptulla, who was given responsibility for minority affairs.

One major winner is Nitin Gadkari, the former president of the BJP who had to step down in January 2013 due to corruption allegations relating to his business dealings. He was given one of several expanded “super ministries” of roads, highways and shipping—a key responsibility given Modi’s commitments to improving India’s decrepit infrastructure.

There is also space for one of the members of the Nehru-Gandhi dynasty that has run the rival Congress party since independence and has provided three prime ministers. Maneka Gandhi, widow of Sanjay Gandhi and the sister-in-law of Congress supremo Sonia, was given charge of women and child development.

Harsh Vardhan, a doctor praised for his work on eradicating polio in India and an anti-tobacco campaigner, was named to the health ministry.

I think Narender Modi has picked a great cabinet. All these people have good reputation as politicians and proven their worth in their fields. Jaitley is the finest choice for Finance and defense Ministry. He is up right and honest man. He will acquit himself well in this Job. Sushma Swaraj is another perfect choice for Foreign Ministry. She faces a daunting and difficult task to balance and improve relations at various levels.

WE will have to watch their performance from close quarters..I think Modi has done a good Job in picking a great team. His Job is half done already.