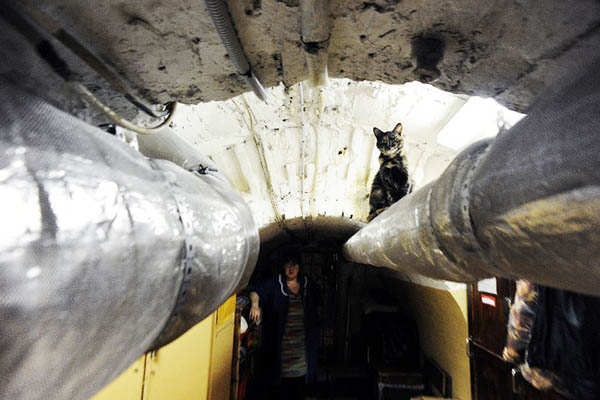 For more than a century visitors have marveled at the Hermitage Museum’s precious collections, and for just as long dozens of cats have prowled the Saint Petersburg palace’s sprawling cellars.

The felines have one main task—to root out unwanted guests: rodents. The 70-odd brigade have their claws so deep into the history of Russia’s largest museum—and one of the world’s oldest—that there is even a special feline unit dedicated to their welfare. “Our cats are as well-known as our collections,” beamed Irina Popovets, who runs the unit.

Every morning, art lovers from the world over arrive at the gates of the Hermitage complex on the Neva River housing a collection that spans ancient Egyptian and Renaissance art to modern masters like Cezanne, Gauguin and Degas.

Meanwhile, 45-year-old Popovets heads down below to feed her purring charges, a mixed batch of colors, breeds and temperaments who are always overjoyed to see her. Some days, she brings along three assistants to help her vaccinate new arrivals and treat the sick. As with humans, love alone is not always enough.

“Most of them are in bad shape,” Popovets admits, adding that many have been brought in by people who can no longer take care of them. Her office is located near the massive underworld inhabited by the cats and its walls are hung with portraits of the beloved animals.

“People very often discreetly bring us their cats,” she said, and the museum sometimes struggles to keep the ever-expanding feline staff.

Cats first found a home at the Hermitage long before it became a museum open to the public in the 1850s. In 1745, Peter the Great’s daughter Empress Elisabeth issued a decree ordering that “the finest cats of Kazan [a city on the Volga river] be found, the biggest, the ones best-suited to catching mice, so that they can be sent to Her Majesty’s court.”

By the time Catherine the Great took power in 1762, the felines had become official residents. They were even dubbed the Winter Palace cats, after the royal residence that has now become part of the museum. They survived successive wars, invasion by Napoleon’s forces and even the revolution that overthrew Tsarist rule.

The cats, however, did not make it during the 1941-1944 Nazi siege of Leningrad, the city’s name under Soviet rule. The city’s famished population had no choice but to eat all their pets in order to survive.

Legend has it that the palace’s feline guard was brought back to life when World War II ended, when new recruits were brought in by train from all over Russia. By the 1960s, there were so many cats at the Hermitage that the authorities decided it would be best to abandon them.

Yet the rat population proliferated and a few years later the cats again found their place. Though they are no longer allowed into any of the museum’s 1,000 halls showcasing more than 60,000 masterpieces, staff say the cats have won the fight against the rodents.

And they have become stars in their own right, hugely popular with some three million tourists who visit each year and snap up souvenirs and postcards adorned with cat pictures on sale in the museum’s shops. “Given the Hermitage cats’ popularity, we have decided to kickstart a process to copyright their name,” museum director Mikhail Piotrovsky said.

There is even an annual holiday in the felines’ honor once a year, as well as a website inviting residents of Saint Petersburg to adopt one.

Popovets picks up her office phone to answer queries from a man keen to take home a kitten whose picture he has seen online. “You’re right, it is an honor to adopt a Hermitage cat,” Popovets tells him.