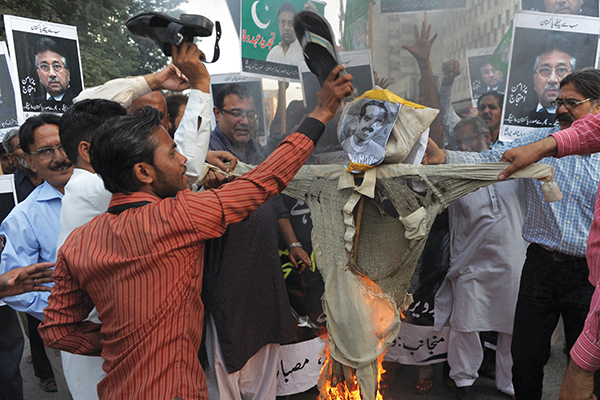 On April 7, Gen. Raheel Sharif surprised the country with what has widely been taken as a principled statement of soldierly solidarity with Pervez Musharraf, Pakistan’s former Army chief who remains Al Qaeda’s prime target for assassination and the ruling party’s No. 1 enemy. Sharif announced that the Army would “resolutely preserve its own dignity and institutional pride.” The Army chief said this at the headquarters of the commando Special Services Group, to which Musharraf once belonged, in response to a soldier upset about the grotesque Army bashing on television—especially by the defense and railways ministers. The two ministers have been taunting Musharraf, asking him to act “like the son of a man.” The defense minister, Khawaja Asif, has accused Musharraf’s “supporters” of being “mentally unbalanced” and accused them of planting explosives in the former president’s path for sympathy and political point-scoring. After Sharif’s statement, which was politic and remarkable for its context, the pathological screed against the Army and Musharraf noticeably declined on talk shows. An upset Asif, who is likely to lose the defense ministry, played victim by blaming the media for misrepresenting his “principled position” and saying that he would “die for the Army.”

According to Pakistan’s constitution he is holding this office ”ILLEGALLY” for holding the dual nationality, he is not eligible to hold public office in Pakistan. Along with Khawaja Muhammad Asif, the petition included names of 13 other current members of National and Provincial assemblies in Pakistan. the court didn’t find him guilty in this regard because the judges was paid
we the peoples ,citizen of Pakistan Tax payers demand that KHAWAJA ASIF should be arrested charged and punished for humiliating our brave armed forces for degrading the the moral and dignity of our national ”fallen heroes , ,

This no-good inefficient corrupt government has no skills, no statecraft. ALL they want is to loot. And this is why they want ex-President Musharraf, extolled by the common man for prosperous years of governance, to leave. In every sphere, be it education or developmental projects there was a tremendous advance. They fear him for his honesty and integrity, offering him illegal bonds to leave the country. Hence these mindless diatribes and scared immediate withdrawal of ill-considered statements.
‘Will no one rid us of these TTP supporters?’