Home Latest News The Other IDPs 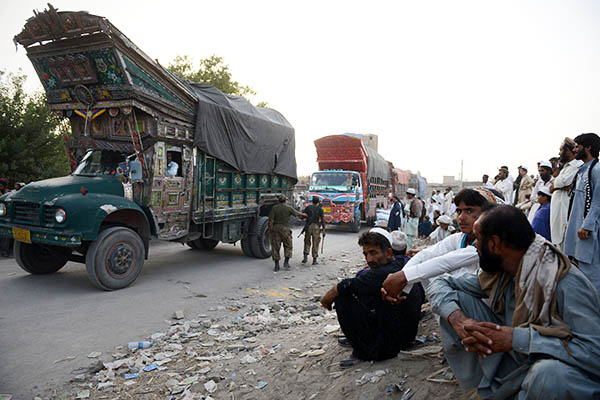 North Waziristan’s minorities complain of discrimination and apathy in Bannu.

Over 400,000 civilians from North Waziristan have fled the tribal agency since the military launched Operation Zarb-e-Azb on June 15. But while the government has pledged to provide assistance to all the internally displaced persons (IDPs) streaming into Khyber-Pakhtunkhwa province, minority leaders say they have been ignored and left to their own devices.

For Khalid Masih, who represents the minority community that fled the tribal area for Bannu, this is just further proof of the government’s discrimination against non-Muslims in Pakistan. The 36-year-old fled his home in Miranshah barefoot, and without any food or water. The main bazaar of North Waziristan’s main town was bombarded by jet fighters on June 26. Upon arriving in Khyber-Pakhtunkhwa province, he says he and his family were met with apathy from government officials and are currently living in a Christian school with other displaced minorities.

“We are often discriminated against by the government,” says Masih, who claims his maternal grandfather served in the Colonial Army pre-Partition. He said that prior to the military operation, the minority community of North Waziristan had lived peacefully alongside their Muslim neighbors. “We have been living there since before Partition, and have no problems with the local [conservative] Muslim community,” he said, adding that their primary misery had been lack of employment due to limited options in the government sector.

Approximately 200 Christian and Hindu families live in Miranshah. According to Masih, there are scattered minority communities in Mir Ali and Razmak as well. Many of them have fled to Bannu in the past week, with the majority setting up camp at the Panel High School and College.

“The government only offers us [minorities] jobs as sweepers,” he said. “I have a masters degree but am unemployed because I did not want to be a sweeper.” He said that the community is comprised of literate men and women who merely want to be treated as equals. “Women can become teachers because female Muslim teachers have refused to come to Miranshah due to the security threat,” he added.

Emmanuel Basharat, another IDP, agrees. “We have been ignored by the government and our own community leaders,” he said. “Without the school, we would have no assistance or shelter.” He said that his family and friends had never faced any problems or threats from the Taliban or other Muslim families in North Waziristan. “We even celebrated Christmas [without any concerns],” he said.

Zahid Chand, 35, is among the Hindu refugees living at the school. He said that he and his neighbors mostly worked as sweepers in Miranshah and were respected by the local Muslim community for their work ethic. “We did not want to leave,” he said, “[but] our women and children were scared of the military bombardment and we were trapped inside our homes during the curfew so opted to leave [when it was suspended].”

Operation Zarb-e-Azb aims to clear the tribal areas of the Taliban and their various offshoots. Since the operation started, 456,292 people have been registered as IDPs with the majority opting to live with relatives in Bannu, Dera Ismail Khan and Lakki Marwat. “Only a few hundred people have opted to stay in the camps set up for IDPs,” said Maj. Gen. Asim Saleem Bajwa, the ISPR director general.

Suran Singh, adviser to the Khyber-Pakhtunkhwa chief minister on minority affairs, told Newsweek the majority of the minorities displaced had failed to register themselves as IDPs, making it harder for the government to help them. “I have talked to the authorities, and soon their registration process will be completed,” he said, adding, “The facilities at the school are very good. The displaced have separate rooms [for each family], clean drinking water and food.”

He said the government did not discriminate on the basis of religion. “IDPs are IDPs,” he said. “I personally visited the Panel High School today and have given each family Rs. 2,000 from my own pocket and gifts to the children,” he said, adding that they would be provided with a monthly allowance once they had been registered. “I know the difficulties IDPs can face as I was involved in the aid effort during the Swat military operation,” he added.

But for Chand, the sweeper, it isn’t enough. “We left all our belongings and came here with nothing but some articles of clothing,” he said. “We just want to return to our homes as soon as possible.”