Home Lightbox The Pain of Palestine

The Pain of Palestine 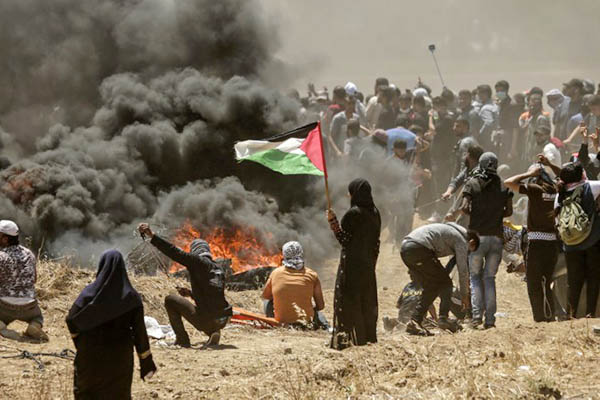 On May 14, Israeli forces killed 55 Palestinians and wounded hundreds more, including children protesting against the shifting of the American embassy from Tel Aviv to Jerusalem in violation of a U.N. Security Council resolution backing a two-state solution for Palestine and Israel. In America itself, a recent poll found 60 percent of the population came out against President Trump’s move, even as Washington vetoed at the Security Council any vote of condemnation or call to probe the killings. Unarmed Palestinians were protesting because they knew the American move would be a trend-setter. At the U.N. General Assembly, significantly, some 128 states voted to condemn the U.S. move, with 35 “abstentions” and 21 “absentees.”

The Islamic world has “verbalized” its pain at this cruel blow to its cause, but the internal disorder afflicting the Muslim states has more or less yielded a walkover to Israel celebrating the 70th anniversary of its foundation. The region is in sectarian turmoil because of the war in Syria. The Arab states are challenged by Iran which threatens to become a nuclear state immune to threats from the United States and its allies. The Palestinian cause has been badly tarnished by Iranian funding of the Palestinian Hamas in Gaza and the Houthis in Yemen. The Gulf states feel threatened by a much bigger Iran and have gradually become more dependent on the U.S. military presence in Bahrain and Qatar. They favor President Trump’s repudiation of the “deal” with Iran that prevented the latter from enriching material for a bomb for 15 years.

Led by Saudi Arabia, the Arab states are uniting against Iran and getting understandably soft on Israel. Riyadh has threatened that it would move to acquire nuclear power it Iran obtains the bomb. It is also making overtures to Israel to create a “balance of terror” in the Middle East, which means the Arab states living under an Israeli “nuclear umbrella.”

Iran’s advance, together with Russia, into Iraq and Syria is raising Sunni fears of being dominated and persecuted by the Shia who form majorities in Iraq and the Lebanon. Pakistan, firmly set to oppose the American move, can hurt itself by losing support of its friends in the Gulf from where it gets most of its expat dollar remittances.