Home Lightbox The Party’s Over 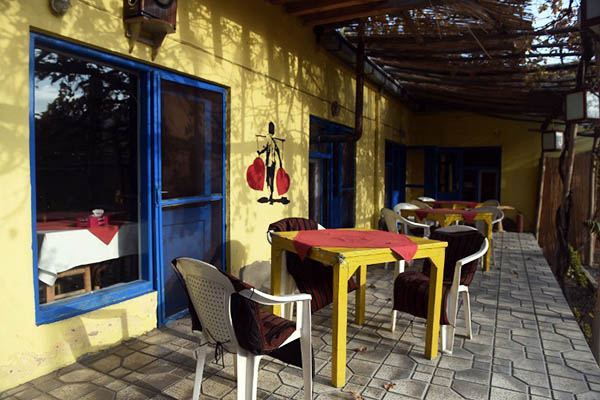 Increasing terror attacks and the NATO withdrawal from Afghanistan has left Kabul bereft of expatriates—and their disposable income.

The tennis club is deserted, the pool-side French restaurant is closed and picnic trips are cancelled. The U.S.-led war in Afghanistan brought a flood of international aid workers, diplomats and security contractors to Kabul, creating a frenetic social scene that is now a distant memory.

A series of Taliban attacks on expat hang-outs shattered any illusions that foreign civilians were safe in the city, and those places still open have bored waiters and empty tables. As the United States and its allies officially end their 13-year war on Dec. 31, Afghanistan appears in the grip of worsening violence and the remaining foreign workers have retreated further inside fortified compounds.

“I used to employ 28 people a year ago. Now I employ only eight,” an expat restaurant manager told AFP on condition of anonymity over espresso coffee and almond cake. “I am married to an Afghan and I will stay, but we are very worried. We used to be so busy. All the aid groups and embassies had a list of places that their staff could go. Now everywhere is off-limits,” she said, gesturing to her deserted restaurant over lunchtime.

All-night parties with plenty of alcohol and a lot of young, single people were always incongruous in the capital of conservative Muslim Afghanistan, but now Kabul’s “Kabubble”—as it was known—has truly burst.

“The days of big parties ended long ago,” said Francesca Recchia, the Italian author of the Little Book of Kabul, a new collection of essays about the city. “Any social life is inside people’s houses or compounds. Of course, many internationals are restricted where they can visit, but some of us try to lead normal lives with Afghan friends. There are simply a lot less expats than the crazy days of 2008 or 2010, and those who are here you don’t see out and about. There is a lot of fear.”

The final tipping point for many came last January when a Taliban attack on the popular Taverna du Liban restaurant killed 21 people, including 13 foreigners enjoying mezze and a discreet beer. Among the dead were senior United Nations staff members, European Union police officers, American teachers and British aid contractors. Today, the site is boarded up and abandoned.

Five minutes’ drive away, the steel doors of the Gandamack Lodge have been locked since April. It was perhaps the best-known restaurant and hotel in Kabul, serving British favorites such shepherd’s pie and bread pudding with custard.

After dinner, its basement pub boasted a warm log fire, a well-stocked bar and antique rifles hanging on the walls—until the whole premises was closed down by the government for being a “nest for intelligence agencies.”

Old expat haunts like French restaurant L’Atmosphere—once famed for its pool parties—have closed, and picnic trips to Qargha lake outside Kabul or to the Panjshir valley are now often deemed too risky.

“Every Thursday and Friday there would be parties for hundreds of people, with guest lists that really meant any Westerner could just walk in,” said Kabul-based American journalist Courtney Body. “With the troop surge [2010-2012], there was also a civilian surge. It was hedonistic and we never worried about anything. There were no rules compared with back home, so foreigners liked it. There was a sense of freedom. I remember all-day parties. You could enjoy a beer and a swim, and someone would always get thrown into the pool with their iPhone in their pocket.”

The tennis club was one center of the social whirl, where ambassadors teamed up with NGO workers for mixed doubles in the afternoon. Now the umpire chairs have rotted to bits, and the disintegrating net is repaired with patches of ribbon.

“No one comes any more,” said the forlorn coach, who asked for his name to not be used for fear of attracting attention from the Taliban.

Small signs of the old era do remain—a chic and heavily protected café selling $14 burgers, and a secret bar offering small cans of Heineken for $12.

Ganjina, a collection of upmarket shops, offers iPad cases sewn by Afghan refugee women and elegant clutch bags made out of the same material used for the all-encompassing burqa. But sales have plunged this year as deadly attacks targeted a luxury hotel, residential compounds, vehicle convoys and foreign guesthouses, journalists and doctors.

“Business is down 40 percent since January and the shop is hanging on by the skin of its teeth,” said Kerry Jane Wilson, director of Zardozi, which runs an outlet in Ganjina.

Wahid Abdullah, owner of Herat Carpets on Chicken Street, the souvenir market since the hippy days of the 1970s, recalled how the U.S. war brought a sudden glut of customers after 2001. “We used to be so busy we didn’t have time for lunch,” said Abdullah. “The first years were super, and I hired extra weavers in Kabul and Kunduz province. I know many expats are leaving. But we will keep working. Selling carpets is what my family does.”