Home Features The Peril of Pakistan

The Peril of Pakistan 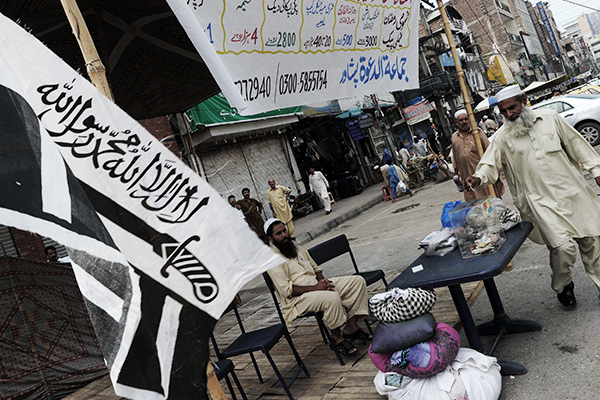 [dropcap]T[/dropcap]he chilling jihadist video released this past July is proof of just how potentially dangerous Pakistan is to itself‚ the region‚ and the rest of the world. It shows would-be Times Square bomber‚ Faisal Shahzad‚ a Pakistani-born American citizen‚ dressed in a brown shalwar kameez and Chitrali cap‚ embracing the long-haired Pakistani Taliban leader Hakimullah Mehsud‚ patting him warmly on the back and then vigorously pumping his hand. A voice-over deadpans: “We are planning to wage an attack on your side‚ Inshallah.”

Mercifully‚ the car bomb that Shahzad had learned to fashion last year while visiting the militants’ stronghold in North Waziristan‚ one of Pakistan’s semiautonomous tribal areas‚ failed to detonate on May 1. Had it exploded‚ killing and wounding New Yorkers‚ the U.S.‚ arguably‚ would have launched ground operations‚ not just retaliatory drone strikes‚ against militant strongholds‚ pushing the country toward greater instability. “We are just one car bomb away from a major crisis with Pakistan‚” says James Dobbins of the Rand Corporation‚ a nonprofit research organization dedicated to the public welfare and security of the U.S.

Three years ago‚ Newsweek published a controversial cover naming Pakistan as the world’s most dangerous nation. It still is‚ in my opinion. The plot that Shahzad hatched with Mehsud and other militants in Waziristan against Western interests is just one of many.

This past January‚ Pakistani tribal militants released another video‚ this one showing Mehsud sending Jordanian double agent Humam Khalil Abu-Mulal al-Balawi on his suicide mission across the border to blow up seven CIA operatives at Camp Chapman‚ near Khost‚ on Dec. 30. Afghan immigrant Najibullah Zazi didn’t leave behind a video that we know of‚ but after receiving weapons and explosives training in an Al Qaeda-affiliated camp in the tribal zone two years ago‚ he returned to his work-a-day life in the U.S. while planning to be part of a coordinated suicide bombing at rush hour on New York City’s subway system. He was arrested before he could act. Then there is the ruthless massacre in Mumbai in November 2008‚ in which 160 people died‚ an operation meticulously planned‚ directed‚ and carried out by Lashkar-e-Taiba militants in Pakistan. India seems to have shown self-restraint this time. But if there is a next time‚ angry public opinion may force New Delhi to retaliate‚ which could bring both nations to the brink of nuclear war.

The great danger is that there almost certainly will be a next time. Pakistan’s leaders have simply failed to come to grips with the clear and imminent dangers lurking in their own country. To be fair, the Pakistani military has acted forcefully over the past 18 months in both Swat and South Waziristan‚ and other tribal agencies‚ to confront and smash militant networks‚ including Al Qaeda. But it hasn’t done enough. The militants are agile and deeply rooted after enjoying years of free rein. North Waziristan has become the magnet for a myriad of would-be jihadists: tribal Pakistanis‚ Afghans‚ Kashmiris‚ Punjabis‚ Arabs‚ Chechens‚ Uzbeks‚ Britons‚ and even Americans. They come to receive inspiration‚ to train‚ to study‚ to plot‚ and to attack. The Haqqani network of the Afghan Taliban still enjoys sanctuary in North Waziristan from where it projects attacks into eastern Afghanistan and even Kabul. These jihadists may be diverse‚ disunited‚ and pursuing their own agendas‚ but there is a common denominator: destabilizing Afghanistan‚ Pakistan‚ and India—and scheming against the West.

They may also be getting stronger. Almost as soon as the most devastating floods in the country’s history struck‚ killing some 1‚600 people‚ destroying nearly a million homes‚ and sweeping away the livelihoods‚ farms‚ livestock‚ and possessions of several million‚ these militant groups were quick to act‚ filling a void left by the government’s disorganized initial response. Taiba’s charity wing‚ and those of several other Islamist and jihadist groups‚ were out there winning hearts and minds by distributing tents‚ food‚ water‚ and medicine long before government teams began appearing. And the recently released WikiLeaks documents suggest that Inter-Services Intelligence is giving not only shelter to the Afghan Taliban but also assisting and advising the insurgents.

‘We are just one car bomb away from a major crisis with Pakistan.’

Pakistanis do not have to be reminded of the destructive powers that these militants possess. Over the past three years‚ some 215 suicide bombings have killed more than 3‚400 Pakistanis. One such “fedayeen” most probably killed former Prime Minister Benazir Bhutto nearly three years ago. Indeed‚ the compelling news peg to our “most dangerous nation” cover was the suicide bombing of her caravan in Karachi in October 2007‚ which miraculously spared her but killed 134 of her supporters as she returned from a long exile. The space in which militants operate may have shrunk in Swat and parts of South Waziristan‚ but‚ disturbingly‚ it has expanded in other areas of the tribal belt‚ where militants have fled to escape military actions‚ including the Punjab‚ the country’s most populous and perhaps most politically important province. “We now have an abundance of militant groups in the Punjab‚” says Lahore-based political scientist Hasan Askari Rizvi. “It has become their focal point.”

Three years ago the Punjab was relatively free of militant violence. It is no longer. Now a confluence of sectarian‚ anti-Indian‚ and jihadist groups has emerged seemingly stronger than ever. Suicide and ground assaults against the police‚ intelligence agencies‚ and civilians‚ including a bold ambush of the Sri Lankan cricket team in March 2009‚ are on the increase there. Taiba‚ and its political and charitable fronts‚ and numerous other militant groups seem to be flourishing with impunity‚ raising funds‚ recruiting‚ and doing good works in flood and poverty relief to promote their images. Taiba founder Hafiz Muhammad Saeed continues to spew his anti-Indian rhetoric unimpeded. His organization is believed to have ambitions far beyond India‚ says America’s top military officer Adm. Mike Mullen‚ and is becoming “a very dangerous organization and a significant regional and global threat.” So are the many other likeminded militant outfits active in Pakistan. And certainly none seem to be less dangerous than they were three years ago.

Operating out of the space ceded to them‚ and exploiting the country’s modern telecommunications‚ transport‚ and financial systems‚ the Taliban‚ the lashkars‚ and the harakats arguably can plant a bomb in New York‚ London‚ Mumbai‚ and Kabul almost as easily as they can send a suicide bomber to Karachi‚ Lahore‚ or Islamabad. As long as that remains true, Pakistan will be widely viewed as the country presenting the most danger to regional and global peace and security—and to its own stability.

By the Numbers | The Price of War

Gen. Ashfaq Kayani attended the U.S.-Pakistan Strategic Dialogue in March. Here’s some of what the Army chief highlighted in Washington: