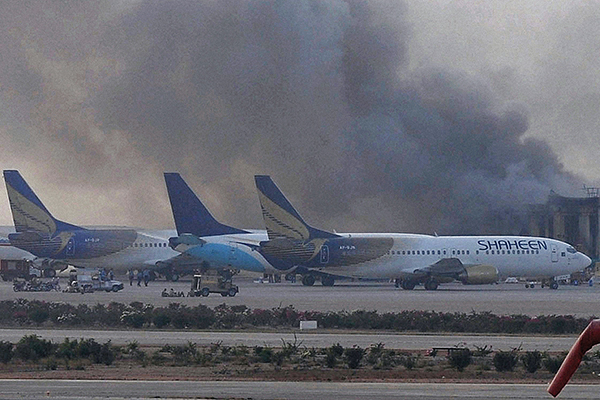 The Karachi Airport attack claimed 27 innocents, 10 militants, and Islamabad’s talks with the Taliban. The 17-hour, Mumbai-style siege was owned by the Taliban-linked Islamic Movement of Uzbekistan. But the attack, which began late night on June 8, was neither unexpected nor terribly successful. The following day, after the Army had declared victory, two Taliban gunmen attacked the airport security force’s academy. There were no casualties, and, ruefully, no prisoners. Karachi hardly offered any new insights. Pakistan’s security is gallingly poor when it is not nonexistent. Emergency services have flatlined. The media is excitable. The politicians are clueless. The bureaucracy is craven. All this is well established and won’t change. That more damage wasn’t done during the siege isn’t an achievement of the state or security personnel. Rather, it more accurately reflects the diminished capacity of the militants, under attack from within and without in the tribal areas, to inflict real damage. It is having sensed just this that the government and Army decided, finally, to move in for the kill.

These are enemies of the State out to undo all the good things that we have left in this country. Yes, they do pose a threat to us and our way of life but they constitute a problem NOT SO GREAT that cannot be surmounted by the resilient people of Pakistan. Insh Allah, the people of Pakistan will prevail and the nefarious designs of these outlaws defeated in the near future!

This security lapse tells you that the so called “TTP” Terrorists are not only the unwashed bearded lot one sees in Waziristan. For these 11 men to walk in with so much equipment etc means that they had help from within the airport security agencies or CAA to know the best way to get in to hit high value targets.

Sure they have entered Pakistan by showing off as Muslims, To what extend could they know the real meaning of being a Muslim. Rather than Accepting their poor explanations, worth and ideology against Islamic Republic in the name of Islam I think killing them all for good is the only way our people can expect. Enough is Enough.