The PR Firm Behind Malala Inc. 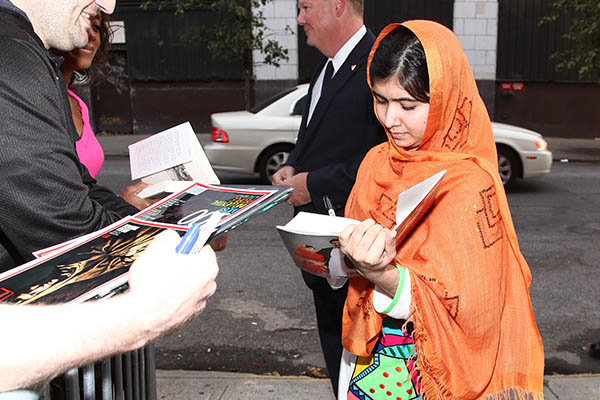 Edelman, which also represents Microsoft, is helping Malala and her family on a pro-bono basis.

Malala Yousafzai has become a formidable force for education rights in the year since the Taliban shot her, but an equally formidable public relations operation has helped her spread her message.

The 16-year-old campaigner for girls’ education has been nominated for the Nobel Peace Prize, addressed the U.N., published an autobiography and been invited to tea with Queen Elizabeth II, achieving a level of fame usually restricted to movie stars.

On Thursday she won the European Union’s prestigious Sakharov human rights prize, drawing a fresh threat of murder by the Taliban. But Malala and her family have help when it comes to balancing her recovery and her schooling with the demands of being a young stateswoman in demand from the international media.

One of the world’s biggest public relations firms, Edelman, has a team working on her behalf while politicians, journalists and book publishers are making her into something of a global brand.

Those close to Malala reject claims from some in Pakistan that she is being manipulated.

“I was worried about all the expectations placed on her before I met her,” said Jonathan Yeo, a British painter whose portrait of Malala went on display in the National Portrait Gallery in London in September. “A lot of people wouldn’t want to deal with it, or have the presence of mind to deal with it, or be swayed by the things around it,” said Yeo. “But my worries that any of those things might be going on were immediately reassured by her and her family.”

He added: “There’s no one with any ulterior motives, all the money is going to charity, there is no political agenda, she is still devoted to her country and still religious.”

A source who has worked with the family said: “From what I have seen, although she is only 16 it is very much driven by her personally.”

Malala had already been in the public eye for years before a Taliban gunman boarded her school bus on Oct. 9, 2012, asked “Who is Malala?” and shot her in the head.

It was Malala’s father Ziauddin, a school principal and himself a seasoned campaigner for education, who first helped propel her from Pakistan’s Swat Valley into the limelight. At his encouragement Malala started writing a blog for the BBC’s Urdu service under a pseudonym in 2009, when she was aged just 11, about how the Taliban were banning girls’ education in Swat. The New York Times filmed a documentary about her that same year.

But it was only after the shooting, and Malala’s subsequent miraculous recovery in a British hospital, that she became a truly global figure.

Former British prime minister Gordon Brown, a U.N. special education envoy, visited her in hospital shortly afterward and took up her cause with a petition that he presented to the Pakistani government. Brown later arranged for Malala to speak at the United Nations in July.

Behind the scenes Brown was also helping Malala and her family come to terms with their new reality. “He has quite a close relationship with the family, particularly Malala’s father,” said a source close to Brown, adding that Brown and his wife Sarah were helping the family with “things that have been fairly overwhelming.”

At the request of Malala’s father, Brown also personally asked consulting firm McKinsey to lend employee Shiza Shahid, a friend of the Yousafzai family, to chair the Malala Fund, the organization that runs Malala’s education campaign and has won donors including Angelina Jolie.

The Malala machine really grew in November 2012 when the PR agency Edelman, whose clients include Starbucks and Microsoft, started working for her family. A spokesman for Edelman said it was carrying out the work on a pro-bono basis and now had a team of five people supporting Malala.

Edelman said its role “primarily involves providing a press office function for Malala” and “helping to advise the family on how to engage with the huge media and public interest in Malala’s campaign.”

There is now a two-month waiting list for an interview with Malala, the firm said.

The global spotlight has provoked a backlash in parts of Pakistani society, with some accusing Malala of acting as a puppet of the West while the Taliban have renewed the threat to her life. Elsewhere there have also been concerns at the level of public exposure.

“It could be a burden. Imposing that on a child might not be ethical,” said Tilman Brueck, the head of Stockholm peace research institute SIPRI.

Malala herself insists the circus around her has not affected her personality. “My world has changed but I have not,” she says in her autobiography I Am Malala.

I am surprised at all the emphasis that is being put on Malala. How about Edhi, is he any less important than Malala. But I guess he didn’t give in to the western crap. I feel bad that she was shot but how her father cashed in on it is amazing. Wake up smell some smelling salt and let’s recognize the true heroes of our country.

I am surprised to hear about Pakistan’s Football Team for raising funds for Malala. It’s strange that players in rags would raise funds for a multi-millionaire girl who is minting money like anything from the whole world and did not spend a single penny on poor Swat girls’ education on whose name she is filling her coffers.
Sajid Aziz

Wherefore art thou malala, o winner of the nobel peace prize, o darling of the jewish public relations firm EDELMAN, you who were found by some miracle by the same people who could not find osama bin laden.
Wherefore art thou o malala, the children of myanmar cry for your multi million dollar paychecks to help them just once.Dont you have the contact details for that other bastion of democracy and fellow nobel peace prize winner, aun yang suu chi? Or will you only show your taliban shot head when the rohingya muslims start fighting back?