Home Business The Price of Looking the Other Way

The Price of Looking the Other Way 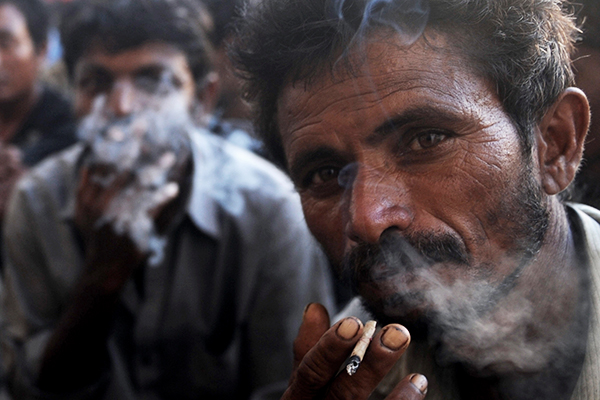 Japan Center in Lahore’s Shah Alam or Shahalmi market is a gray, five-story structure just off the main road. It specializes in tobacco-related goods, with entire shops dedicated to retailing lighters, water-pipe tobacco, and smuggled cigarettes. The low-price cigarette brands displayed front and center here include Three Kings, Fisher, Tradition, Capitol, and the ubiquitous Melburn. All of these makes, say law enforcement officials and cigarette manufacturers, are illegal and dubious. But despite periodic crackdowns, their sale in Lahore and other Pakistani cities keeps places like Japan Center in business all year long.

Shahalmi isn’t the only market in Lahore to peddle cigarettes that have either been illegally manufactured, without abiding by regulations that seek to reduce health risks, or smuggled into Pakistan without paying due duties and taxes. But it seems to be the center of the illegal cigarette trade, with Japan Center just one of the many buildings here crowded almost exclusively with mom-and-pop cigarette fronts. Revenues from the sale of such cigarettes bolster crime rings and add to the security risks already confronting Pakistanis.

“Smuggled goods also include narcotics and arms and ammunition,” said Sultan Azam Temuri, additional inspector-general with the capital police in Islamabad, about the illicit cigarette trade in Pakistan. “This links up with terrorism.”

Many of the syndicates involved in cigarette trafficking via Torkham are linked up with militant groups, say Pakistani police officials. Brands like Melburn make their way into Pakistani markets through the Afghan border, which remains largely defiant to monitoring and vigilance efforts. Cigarettes, of course, are only part of the illegal imports; there are also drugs, alcohol, weaponry, and U.S. military hardware. The scale of the cigarette business alone—an estimated Rs. 100 billion in annual revenues for the smugglers—points to the difficulties in stamping out the problem. The billion-dollar cigarette-smuggling industry is flush with cash, a portion of which is used, some suspect, to have law enforcement look the other way.

The social costs from fattening the purses of organized crime linked up with terrorist outfits are obvious. Smuggling revenues are used to fund terrorist attacks in Pakistan and Afghanistan. Cigarettes are only second to heroin as a revenue source for terrorists, according to a Pakistani intelligence official. The U.N. estimates that a third of the Taliban’s approximately $400 million in annual revenues comes from their extortion of smugglers.

“The Taliban and other militant groups do not have to do much,” says Ikram Sehgal, who runs a private security firm, “they simply receive taxes on a regular basis from owners of illegal, and legal, cigarette factories and later for the safe passage they provide to the convoys.”

The economic costs to Pakistan are also staggering. According to a recent study by Euromonitor International, a privately owned London-based market intelligence firm, Pakistan loses some Rs. 80 billion each year by not being able to tax spurious brands like Melburn.

The state is aware of the problem. The Punjab government recently raided tobacco shops and general stores thought to be selling smuggled cigarettes around the province and forced storeowners to surrender their illegal stocks. But the crackdown ended up penalizing even legitimate businesses selling duly-taxed imported brands like Dunhill, Rothmans, and Marlboro.

The illegal trade cannot be curbed without expertise. “Capacity building is essential,” says Temuri, “this includes equipment and infrastructure to help the police.” He says existing laws are “adequate” but go unimplemented. He estimates Pakistan’s lost tax revenues from cigarette smuggling at Rs. 5 billion, far below Euromonitor’s assessment.

The federal government is running a public-awareness campaign against smuggled cigarettes, including the notoriously hazardous Pine brand, and Temuri’s team conducts regular raids in slums around Islamabad to gather intelligence about the smuggling business, which mostly involves but is not limited to Pakhtuns.

The cigarette smuggling trade is flourishing with impunity. “We get most of [the stocks] from the black market,” said a storeowner in Japan Center refusing to disclose his name for the record. “We have offices in Islamabad and Peshawar as well, you’re more than welcome to visit us there as well.” Such openness owes to two reasons. One: law-enforcement capacity constraints; and two: other, more pressing issues, like terrorism, being prioritized over cigarette smuggling.

“It’s an important issue,” says Temuri of the smuggling business, “but right now the government’s priority is preventing terrorism and maintaining law and order.” Except that cigarette smuggling isn’t divorced from terrorism; it supports it.