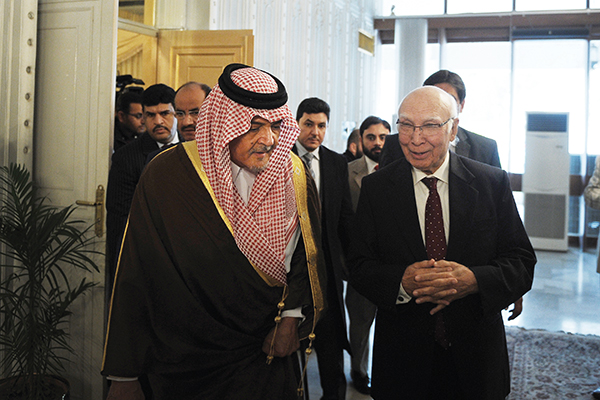 Saudi Arabia, in the words of its foreign minister, has a policy of “noninterference in the internal affairs of any country, and especially a friendly country.” Prince Saud al-Faisal bin Abdulaziz al-Saud said this during his recent visit to Islamabad, where he denied rumors that his country would use its leverage with Prime Minister Nawaz Sharif to extricate another friend of the kingdom, Sharif’s bête noire Pervez Musharraf, from the possibility of execution. This apparently new Saudi policy of “noninterference” came as news to most. In 2000, after the Musharraf regime had Sharif convicted, Riyadh pressed the general to let go Sharif and his family—to lavish Saudi exile. When Sharif welched on the Saudi-Lebanon-brokered 10-year exile agreement by returning to Pakistan in 2007, another Saudi prince stepped in front of the cameras in Rawalpindi to shore up Musharraf’s position. Musharraf, who remained hospitalized at the Armed Forces Institute of Cardiology in Rawalpindi until press time, may require a triple bypass. Meanwhile, Sartaj Aziz, Sharif’s foreign-affairs adviser, thanked Prince Saud for staying mum over Musharraf: “We are satisfied with the status of our existing cordial and fraternal bilateral relations.”