The Prose of Pak-U.S. Relations 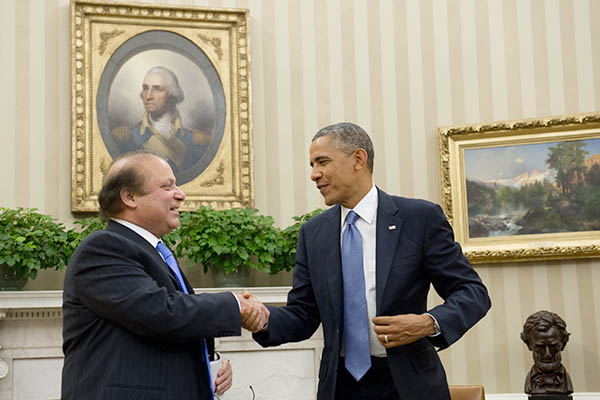 Islamabad and Washington have a lot to discuss before they can arrive at any potential nuclear deal.

Prime Minister Nawaz Sharif is in the United States on an official visit and will be meeting U.S. President Barack Obama. There’s been much speculation about what the two leaders will discuss. Leaks from the U.S. side, in the media and from the policy community, indicate that Obama is interested in talking about a ‘nuclear deal’ and the regional security situation. Statements, mostly off the record, from the Pakistani side also indicate these are the two primary agenda items.

Is this what we call convergence in the English language?

No, unless the two sides can be said to at least broadly agree on the definition, scope and direction of these agenda items.

A putative nuclear deal with Pakistan for the U.S. does not, at least for a long time to come, constitute the kind of deal Washington signed with New Delhi after a grueling process that took over three years. As leaks and at least one clear statement from Peter Lavoy, senior director for South Asian affairs at the U.S. National Security Council, suggest the U.S. is concerned about

(1) Pakistan’s short-range, battlefield missile, Nasr, which can carry a low-yield nuclear warhead and, therefore, falls in the category marked tactical nuclear weapons, and

(2) Pakistan’s longer-range Shaheen-3 missile with an estimated range of just under 3000km. [N.B.: the real ranges of Pakistani missiles are a guarded secret; also, Pakistan has a slightly different definition of MRBMs and IRBMs.]

The American concern on Pakistan’s TNW capability is clear: they require dispersed deployment, delegated control down to small-units level, can fail deadly in a crisis, and can be stolen or used without authorization.

Corollary: they are terribly dangerous to have and can respond irresponsibly in an escalating crisis. They can, therefore, cause instability in an already tense environment.

The longer-range missiles, so goes the U.S. argument, bring many more countries within the strike range of Pakistani missiles in far West Asia (the Middle East) and also in Pakistan’s east.

There are additional U.S. concerns too. One has to do with Pakistan’s veto of negotiations on FMCT [Fissile Material Cut-Off Treaty] at the Conference on Disarmament (CD). Another allied concern is about the alleged fast-track growth of Pakistan’s nuclear program, which the U.S. thinks needs to be capped. The third is Pakistan’s First-Use Policy. The fourth relates to the safety and security of Pakistan’s arsenal, and the fifth to proliferation issues.

A recent Carnegie Endowment report penned by Toby Dalton and Michael Krepon, A Normal Nuclear Pakistan, lists all these concerns and proposes steps Pakistan can take in order for her to be mainstreamed. However, and this is important, the report makes clear that any such mainstreaming cannot be on the basis of “the commercial leverage and support that resulted in a nuclear deal for India” but “via nuclear-weapon-related initiatives” that Pakistan can, and must, take to “clarify its commitment to strengthening nuclear norms, regimes, and practices.”

Two other articles, by David Ignatius of The Washington Post and David Sanger of The New York Times also list U.S. concerns. Sanger’s piece, pro forma, also mentions Dr. Abdul Qadeer Khan’s network, a widely used misnomer since that network was being operated by a large number of people from various countries, none of which has so much as indicted their nationals.

However, that ignored fact aside, both Ignatius and Sanger, like the Carnegie report, talk about putting curbs on Pakistan for some semblance of a civil nuclear deal.

This is how Ignatius put it: “The White House is also exploring what could be a diplomatic blockbuster: possible new limits and controls on Pakistan’s nuclear weapons and delivery systems. Such an accord might eventually open a path toward a Pakistani version of the civil nuclear deal that was launched with India in 2005.” (Italics mine.)

If Pakistan agrees to these ‘brackets’ and an agreement is reached, writes Ignatius, quoting a source, “the United States might support an eventual waiver for Pakistan by the 48-nation Nuclear Suppliers Group, of which the United States is a member.” (Italics mine.)

Notice the ‘mights’ with the Pakistani version of a nuclear deal and the idea of brackets to get a sense of how the U.S. side is likely to approach any such talks.

This article does not purport to analyze what the Pakistani response should or would be, but to simply lay down the U.S. approach on this issue. It would suffice at this stage to say that Washington’s opening gambit is not what Islamabad expects from such a deal or the quid pro quo Pakistan might seriously consider to that end.

That said, negotiations are about finding common ground. The U.S. needs to get Pakistan closer, formally, to the international nuclear regime. Pakistan needs that to add value to its nuclear capability. Both are compelled to have such a deal. What remains are arduous, long negotiations to that end.

The issue of regional security is another concern on both sides. For the U.S., it relates to the worsening situation in Afghanistan—where the government is tottering and the Taliban are expanding their reach—and terrorism (read: Taliban sanctuaries in Pakistan).

For Pakistan, it is Pakistani Taliban sanctuaries in Afghanistan; India’s use of Afghan territory, in combination with elements in the Afghan intelligence service, to encircle Pakistan; and, on the east, the no-engagement-with-Pakistan policy by the Modi government that has also resulted in escalating violence along the Line of Control and the Working Boundary.

Going by the August visit of U.S. National Security Adviser Susan Rice to Pakistan, it is safe to assume that Obama and his administration would like to spend 99 percent of the time on Afghanistan. How much and how effectively can Prime Minister Sharif push it beyond that to include Pakistan’s growing concerns on India’s belligerence remains to be seen.

One hopes, however, that the reality of these talks from the Pakistani side will match the rhetoric about evidence on India’s activities in Balochistan and the tribal areas. What’s important is to drive the point home about inter-linkages in the regional situation and the danger of treating issues piecemeal.

Equally important, however, is that Pakistan, while listing its concerns also presents to the American interlocutors solid proposals on how the situation can be improved.

That requires doing one’s homework and treating foreign policy in terms of hard-nosed prose rather than effusive, maudlin poetry.