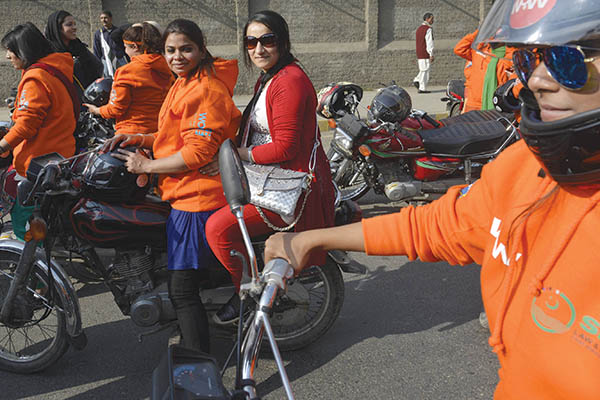 Participants of the Women on Wheels campaign ride motorcycles during a rally in Lahore, Jan. 10, 2016. Arif Ali—AFP

Purging violence against women in Pakistan’s most populous province

The empowerment of women is a global movement, built on the commitment and sacrifices of women and human rights activists. It has not been an easy journey, historically challenged by archaic traditions, customs and mindset that look down on women and oppose their efforts to be mobile, educated and empowered. To determine a civilization’s moral health, one has to look at its treatment of women, minorities and other vulnerable sections of society. For Pakistan, that time is now.

The challenges facing women here differ depending on their social class and societal position, but the phenomenon of violence against them is widespread and especially demeaning, exacerbated by customary traditions and practices. The use of violence is not only meant to cause physical harm to women, it also aims to inflict emotional and psychological trauma. In other words, violence has far graver implications than are generally associated with it. It also has a political and economic cost as it undercuts women’s growth, bars them from seeking public roles, and prevents them from becoming economically productive members of society.

In its “World’s Women 2010: Trends and Statistics” report, the U.N.’s Department of Economic and Social Affairs notes: “In all societies, to a greater or lesser degree, women and girls are subjected to physical, sexual and psychological abuse that cuts across lines of income, class and culture. The low social and economic status of women can be both a cause and a consequence of this violence.”

In the recent past, a combination of factors such as technological advancements and globalization, have brought about a massive transformation in the professions and careers available to women. To build on this momentum, and push for the mainstreaming of women in all walks of life, the world commemorated International Women’s Day 2017 on March 8. This year’s focus was on women in the changing world of work, with the ultimate goal of achieving gender parity by 2030 as a sine qua non for sustainable development across communities by tapping into their potential through a set of right policies and affirmative action.

In Punjab, which is Pakistan’s largest and most developed province with an estimated population of 100 million, we have embarked upon extensive and elaborate pro-women reform. This is aimed at providing an enabling environment for the safe and non-discriminatory empowerment of women. These reforms, encompassing legislative, economic, legal, political and governance aspects, are in line with our commitment to implement Goal 5 of the U.N.’s Sustainable Development Goals, which relate to achieving gender equality and empowerment for all women and girls.

The latest initiative to join our ongoing reform efforts is the opening of our first Violence against Women Center, a round-the-clock, women-run facility that aims to streamline the investigation-prosecution case flow process by bringing all previously disconnected justice delivery services under one roof. These include first aid care, police reporting and investigation, prosecution, medical examination and treatment, collection of forensic and other evidence, psychological evaluation and counseling, as well as post-trauma rehabilitation.

Such centers aim to address pressing concerns such as the low conviction rate for Violence Against Women crimes, disconnected evidence collection, lack of sensitization to gender-based violence issues, moral judgments and absenteeism of relevant personnel. There is real-time data integration with audio-visual recording of all departments inside the center. Moreover, a toll-free helpline and ambulances have been arranged to facilitate victims. The center will also have a mediation center for properly logged counseling of non-serious offenses at the victim’s request, as well as a facilitation center to assist women on any government-related query.

Further, these centers are integrated with Shelter Homes, where victims will be placed post-investigation. The ultimate goal is to ensure survivors of violence are no longer beholden to their abusers. For this, the government has entered into partnerships with various organizations to train the victims and assist in their placement back into society. Apart from this, all personnel at the centers have been specially trained to ensure they are sensitized to gender-based violence, as their behavior is key to ensuring that the project is implemented successfully.

No reform process can be taken to its logical conclusion unless it has strong political ownership as well as will behind it. I have made women’s empowerment one of the critical legacies of my public service. I have instituted a think-tank, the Strategic Reforms Unit (SRU), which works under my direct supervision. This Unit has already undertaken several key pro-women initiatives such as the Punjab Protection of Women against Violence Act, 2016; an introduction to women’s rights in academic curricula; the launch of Pakistan’s first-ever Women on Wheels project; and the launch of a smartphone application to allow women to safely report incidents of harassment without having to visit police precincts.

Punjab was the first province of Pakistan to launch the Gender Parity Report every year. This report has become a critical tool to evaluate and judge the status of women in the province and take appropriate policy decisions in light of its assessments and recommendations. Together with the Gender Management Information System, it has proven its efficacy by collecting and collating data on numerous indicators related to women.

These reforms and policies aim to make our women self-reliant and empower them to make a positive contribution in our society. We want them to emerge as agents of change who not only transform their own condition but also become a source of inspiration to others around them. The first step in achieving this goal is to remove a critical impediment to women’s progress: violence.

Sharif is the Chief Minister of Punjab

Concrete steps taken by the Pb Govt. CM Shabaz Sharif ‘s performance in empowering womens has been outstanding as in other sectors . Punjab getting converted into a Technology ñ Educational based Province….a model fr all. Well Done Chief Minister Pb …We are proud of you.

Concrete steps taken by the Pb Govt. CM Shabaz Sharif ‘s performance in empowering womens has been outstanding as in other sectors . Punjab getting converted into a Technology ñ Educational based Province….a model fr all. Well Done Chief Minister Pb …We are proud of you.

Concrete steps taken by the Pb Govt. CM Shabaz Sharif ‘s performance in empowering womens has been outstanding as in other sectors

The empowerment of women is a great thing .. excellent work punjab goverment .. credit goes to CM of Punjab

good work by GOP we appreciate the Punjab government….

We are really very happy with articles quality and presentation. Thanks a lot for providing such a great stuff. we are very much thankful for this article. Keep sharing such informative articles with us. Thank you
Yeh Hai Mohabbatein Episode

The empowerment of women is a great thing .. excellent work punjab goverment .. credit goes to CM of Punjab

We need more and more initiative like these to empower them. Hope the new president and prime minister will work more towards empowerment of equal half of the society.

Greetings! Very helpful advice within this article! It is the little changes that produce the largest changes. Many thanks for sharing!

This is very helpful advice in your article. These little changes produces the great changes. Thanks for sharing awesome content.

PMLN is a great political party and we should raise our voices for the rights of womens. PMLN we proud of you. thanks