The Rio Olympic Games in Brief 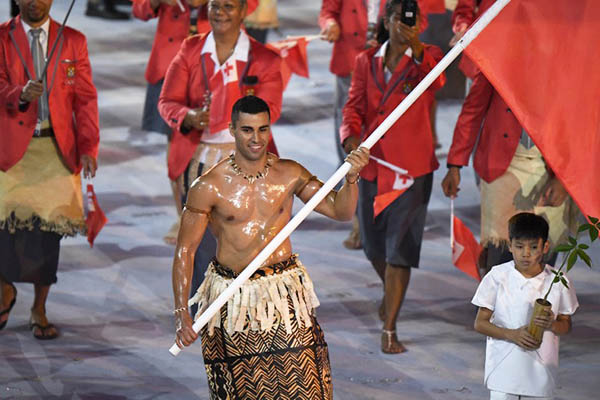 Tonga’s flag-bearer Pita Taufatofua has become the online star of the Rio Games’ opening ceremony after striding through the parade bare-chested, torso dripping with oil and wearing only a traditional ta’ovala mat round his waist.

The taekwondo athlete racked up 45 million mentions on Twitter according to the official Games website, and the normally staid Wall Street Journal hailed perhaps “the grandest entrance by any flag bearer in recent history.”

Taufatofua’s Rio exploits also made headlines in his tiny South Pacific homeland, where the Matangi Tonga news site said he was “the hottest man today in a town that’s known for its appreciation of the body beautiful.”

His racquet slipped out of his grasp as he served early in the second set but he still had time to retrieve it and chase down his opponent’s return before hitting a crisp winner. The point helped the fourth seed on his way to a 6-2, 6-4 win as he safely reached the second round.

United States boxing medal hope Carlos Balderas is hoping to make it home from Rio with gold, and his full set of teeth. But if it comes to the worst, the teenage lightweight will at least have someone in the crowd who can do some emergency work—his dentist.

The 19-year-old Balderas fought against the backdrop of an anti-U.S. crowd to battle past the vastly more experienced Kazakh Berik Abdrakhmanov with a unanimous points decision that was greeted by more boos from much of the Brazilian crowd. Afterwards he revealed that he had more than 20 friends and family backing him in Rio. “My dentist is also coming to support me,” he added, smiling. “And hopefully he can also help me out.”

Separately, a Japanese octopus has decreed that Japan will win eight gold medals at the Rio Olympics—putting pressure on their athletes to perform.

Japan won only seven golds in 2012 but the unnamed octopus, presented with three plastic boxes labeled “7 or under,” ‘8’ and “9 or more,” picked the middle one. It is not known, however, if the octopus has mystic powers. The event was held in Akashi, western Japan, and was aimed at promoting locally caught octopuses, according to Kyodo news agency.