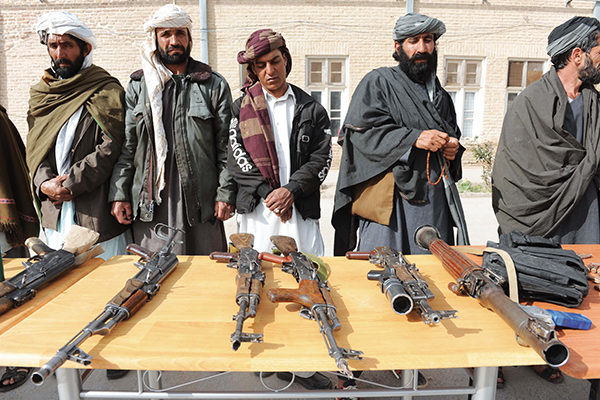 [dropcap]W[/dropcap]hen Wali Khan returned to Afghanistan in 2008, having spent his entire life in an Afghan refugee camp in Pakistan, his first order of business was to build a house on his late father’s patch of land in eastern Paktia province. But when he tried to reclaim the other 70 acres he believed to be his, he ran into big trouble. The powerful Ahmedzai tribe warned Khan and his four uncles not to touch the land that they claimed was theirs. “The whole village was threatening us with death,” says Khan, adding that the Ahmedzais are “strong, rich, and influential.”

The tension nearly ended in violence last year as Khan, his uncles, and the Ahmedzais took up arms and prepared for battle. “There was a real danger of bloodshed,” says 33-year-old Khan, who runs a medical laboratory in Gardez. He quickly ruled out taking his case to the official government courts, which he says are corrupt and plodding. But he didn’t want to risk a shootout. So instead he decided to take the land feud to the Taliban’s court. The Ahmedzais agreed, saying they had no objection submitting to the Taliban’s jurisdiction. “Taliban courts are easier, more transparent, quick, and stand on Islamic law,” says Khan. “If a Taliban judge is found to be corrupt, he will be beheaded.”

The Taliban may not be popular, but their courts seem to be. Even a senior adviser to Afghan President Hamid Karzai admits that many Afghans prefer them to the government’s legal system. Qadar Qalatwal, a member of Parliament from Zabul province, agrees, saying local government courts are simply hopeless: “The local government is drowning in corruption so no one trusts the justice system.”

As a result, increasing numbers of Afghans are taking their legal woes to the Taliban’s justice system. “Afghans come from all over, from the cities and countryside, to resolve family and land disputes, loan problems, and even women’s issues,” says Taliban Upper Court judge Habibullah Haqqani.

Most Afghans say they don’t want to be ruled by the Taliban again as they were for years until the American-led invasion in 2001. They don’t like the Taliban’s strict social policies and their banning of girls’ education. They deplore the fact that 80 percent of the more than 2,700 civilian casualties last year were caused by the insurgents. But they like Taliban-style justice. “We don’t want to be ruled by them, but we support the Taliban’s Islamic courts,” says Khan.

‘Taliban courts are easier, more transparent, quick, and stand on Islamic law. If a Taliban judge is found to be corrupt, he will be beheaded.’

A government judge from Ghazni province, who doesn’t wish to be named for security reasons, strongly defends the Afghan legal system though he admits corruption is endemic and the wheels of justice rather creaky. “Most Afghan people are illiterate and do not have any patience,” he says. “They want a verdict in a few weeks.” Official justice, he adds, may be slow, but it is more thorough and rigorous. “Government courts need to study each case deeply and need evidence, proof, eyewitnesses, and supporting documentation,” says the government judge. “Taliban courts are speedy and may not be corrupt, but the trials are usually not fair,” he says.

Khan says finding a Taliban court proved to be easy. “The villagers know who the judges are and how to contact them,” he says. Following their instructions, Khan traveled to the Shahikot Mountains along the Pakistan border, the place where the U.S. launched Operation Anaconda in 2002, one of its biggest battles against the Taliban and Al Qaeda. Khan thought that he’d find a proper courtroom in the local village. “I thought I’d see banners and a room full of clerks and people,” he says. But it was just a nearly vacant mud-walled hut. The judge arrived on a motorbike, not in a fancy car like most government judges drive. He then took Khan to a nearby mosque where he interviewed him and took notes. The judge said he would send a couple of Taliban fighters to contact the 10 Ahmedzais who also claim the land and invite them to a meeting.

Ten days later, according to the instructions sent by the judge, Khan, his uncles and the 10 Ahmedzais went back to Shahikot where the judge escorted them to the courtroom nearby. “It was a simple court, just a few books in a room, and two Taliban judges,” says Khan. During the three-hour meeting, both sides laid out their claims to the land. One judge threw out some of the Ahmedzais’ supporting documents, saying they were forgeries. “I found the Taliban judge to be a real expert on documents,” says Khan. The judges then scheduled another meeting, this time to include eyewitness testimony.

At the next meeting six days later in a mud hut near Gardez, Khan produced three witnesses, all aged between 90 and 95, to testify that the land belongs to his family. “Taliban judges respect the elderly,” says Khan. As the half-day session ended, the judges said they would send out a written and stamped verdict within one week. True to their word, Khan received the verdict one week later. But he was surprised and deeply disappointed. The judgment went against Khan and his uncles. Khan complains that the verdict was “not clear,” though he respects it since he believes it was based on Islamic law. He hasn’t given up, though, and has decided to appeal the decision to the Taliban’s Upper Court, which is based in an Afghan refugee camp in Kohat, across the border in Pakistan. The case is scheduled to be heard this spring after the snows in the mountain passes melt, making the trip across the border easier.

Judge Haqqani, 30, is the man most likely to take up Khan’s appeal. A madrassah graduate, he was appointed to the Paktia Upper Court two years ago. “We make our decisions based on the testimony and Islamic law,” he told Newsweek. “We are not impressed by one’s position, money, or threats.” Haqqani says last year he handled 55 appeals and ruled that 45 of those lower-court verdicts were correct and only 10 were overturned. He says that over the past two years 99 percent of those who appealed to his court have accepted and implemented his decisions.

Afghans obey the decisions because they know that the penalty for flouting a Taliban court’s verdict would most likely result in a midnight visit by a guerrilla squad. And those gunmen will quickly execute the ruling on the spot.