Home Culture ‘The Shape of Water’ Makes a Splash at Oscars

‘The Shape of Water’ Makes a Splash at Oscars 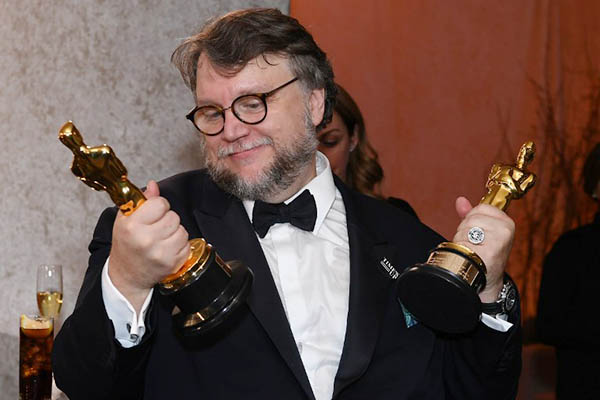 Awards season capped with Academy Awards for Three Billboards, Get Out and Call Me By Your Name

Fantasy romance The Shape of Water took home the best picture Oscar on Sunday, capping an awards season that has seen the film lavished with acclaim and glittering trophies.

The quirky love story challenges viewers to cheer for an unorthodox couple, embracing the themes of tolerance and acceptance. “I want to tell you, everyone that is dreaming of using fantasy to tell the stories about the things that are real in the world today—you can do it,” said Del Toro, who also took home the best director prize.

Del Toro also earned a Golden Globe and Directors Guild Award this season for helming the movie, which won four Oscars overall on Sunday—the other two were for best original score and best production design.

In the movie, Elisa (Sally Hawkins), who has been unable to talk since her throat was slashed as a baby, recruits her gay neighbor (Richard Jenkins) and colleague (Octavia Spencer) on a mission to break out the lab’s amphibian prisoner, whose days are numbered. Michael Shannon rounds out the cast in a scenery-chewing turn as the sadistic government employee responsible for the magical creature, which is also in the sights of Russian double agents who have infiltrated the facility.

“The Shape of Water finds Guillermo del Toro at his visually distinctive best—and matched by an emotionally absorbing story brought to life by a stellar Sally Hawkins performance,” reads the critical consensus on reviews collation website Rotten Tomatoes, where it holds a 92 percent approval rating.

For Del Toro, the most gratifying reaction always comes from the fans, he told AFP at a recent luncheon for the Oscars nominees in Beverly Hills. “The most beautiful thing which I’d heard, in different ways, was that the movie has healed someone emotionally or has given someone emotional ointment for the soul,” he said. “It’s a moment in which you are being told over and over again by ideologists that you should fear the other and that the other is your enemy that is the cause of your problems. In reality, the answer is the other is the solution to your problems. The other is all you have. The other is the path, and the movie says ‘embrace the other.’”

The film comes at a time when Hollywood is becoming increasingly outspoken at awards ceremonies on issues like immigration, government foreign policy, gender equality and sexual assault. At first glance a magical-realist fairy tale, The Shape of Water is perhaps the most overtly political of all the best picture nominees, in its clarion call for solidarity.

Although its middle-aged, male director might not tick the diversity boxes, it has a female co-writer, Vanessa Taylor, and lead, Hawkins, as well as black and gay characters—not to mention the creature itself. “It’s impossible not to see [the politics] this season, or actually the last few seasons,” Del Toro told AFP. “To me, it is encouraging that these are the moments in which we come to the forefront somewhat in the cultural landscape. And it’s a time to speak about what we can do better.”

The Shape of Water has repaid the trust of Fox Searchlight’s executives, who have seen their production budget outlay of around $19.5 million reap $126.4 million worldwide so far, according to Box Office Mojo.

Del Toro recalled at a recent writers’ discussion in Beverly Hills that it was easy to win over the studio brass with his pitch, which essentially went through the film from start to finish using set drawings and a model of the creature. “I knew it was a movie at the end of the pitch, when we were all teary-eyed, and I thought, ‘We’ve got a movie,’” he said. “But when it got to the point of the musical number and the [sex], I pitched rapidly.”

Heaven Is a Traffic Jam on the 405

Call Me by Your Name