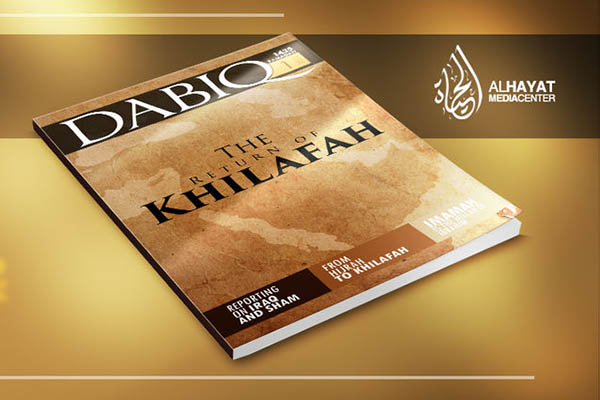 A new online magazine launched by the jihadist group aims to market ‘caliphate’ as legitimate and viable choice for Muslims globally.

Pictures of smiling locals, tales of life-changing experiences, articles glorifying centuries of heritage and predicting a bright future: if the “caliphate” straddling Iraq and Syria had an airline, Dabiq would be its in-flight magazine.

For now, global jihad’s latest English-language publishing endeavor is distributed online and the aircraft over Abu Bakr al-Baghdadi’s dominion are more likely to be warplanes and drones than commercial jets. But the 50-page magazine strives to convince its readers that the caliphate proclaimed last month by Baghdadi, leader of the Islamic State (IS) jihadist group on an area twice the size of Israel, is the legitimate and viable home of the world’s Muslims.

In design, it strongly resembles the Inspire magazine published by Al Qaeda’s franchise in the Arabian peninsula that disseminated bomb-making instructions and aimed to engender “lone wolf” militants, a goal achieved in 2013 with the Boston bomber brothers.

The editorial emphasis in Dabiq, analysts say, is more on state-building than on incitement or operational issues. “The aim isn’t to get young radicalized Western Muslims to carry out attacks but to come to Syria,” said Peter Neumann, director of the London-based International Center for the Study of Radicalization.

Many foreign fighters have already taken that step and Richard Barrett, a former counter-terrorism chief at Britain’s foreign intelligence agency MI6, argued Dabiq was mostly a brochure selling the caliphate as a real and credible entity. “It is the same phenomenon as advertising techniques that aim to endorse your choice of a product rather than inspire it,” said Barrett, who now works for The Soufan Group, a New York-based consultancy.

Thousands of foreigners have joined jihadist groups in Syria since the start of the war there in March 2011 and many of them are now part of the newly-rebranded IS, which has broadened its remit from Iraq into Syria. Dabiq’s first issue also sings the praise of Jordanian-born Abu Musab al-Zarqawi, an ultraviolent military commander who headed IS’s early incarnations before being slain in a 2006 U.S. airstrike, as a founding figure of the caliphate.

The magazine’s introduction explains that it is named after the site of a major 16th century battle in what is now northern Syria that saw the Ottomans defeat the Mamluks and begin a major expansionist phase of an empire Baghdadi and his followers consider to have been the last caliphate. What the jihadist group “wants to communicate by picking this name is that they’re following in the Ottomans’ footsteps,” said Neumann, a professor at King’s College London.

Dabiq is also mentioned by one of Islam’s Prophet’s companions, Abu Hurayrah, as the place where “Roman” invaders are defeated, paving the way for the armies of God to expand and defeat Satan. “This apocalyptic theme has been a powerful strand in Islamist extremism for many years, and is apparently a motivator for some,” Barrett said.

Dabiq’s first issue, entitled “The Return of Khilafah,” includes excerpts from speeches by Baghdadi declaring a new era in Islam and relays his call for skilled professionals the world over to come and help the new state.

The magazine carries pictures of crowds cheering IS militants as they parade through Syrian and Iraqi towns with the black flag, graphic photos apparently of Sunni civilians slain by the “Rafidhi,” a derogatory term for Shias, and of Shia soldiers “heroically” killed by the mujahideen. Dabiq also features a long and complex theological article essentially justifying the caliphate and Baghdadi’s position as both religious and political leader.

According to Barrett, IS “has been good at reaching out to supporters and clearly has design skills, but their written work lacks the pizzaz of Inspire.”

Dabiq’s editorial team also oddly chose to illustrate the article on “imamah,” or leadership, with a free-download stock picture of a border collie herding sheep away from a cliff. “I guess it shows that it’s really made by a Westerner,” Neumann said, referring to the fact that dogs are considered impure in Islamic culture and in much of the Arab world.

Inspire and its promotion of “open source jihad” is believed to have been the brainchild of U.S.-born Yemeni cleric Anwar al-Awlaki but it is not yet clear who is behind Dabiq.

Barrett predicted that the caliphate’s English-language mouthpiece was unlikely to have the same impact and success as Inspire, which became the world’s most downloaded jihadist publication. “The main propaganda is still through social media sites such as Facebook, Twitter, Instagram and other more interactive and ‘modern’ platforms,” he said.