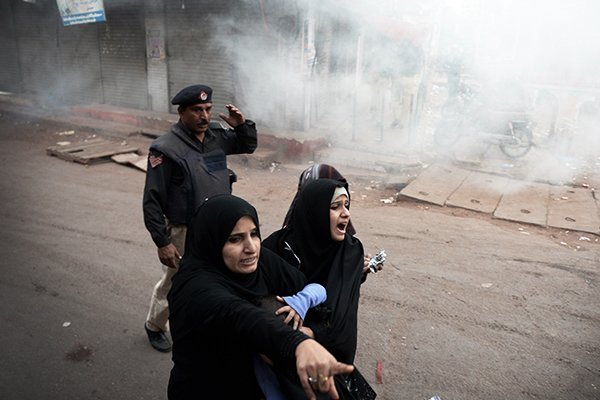 To be effective, a state must strike a balance between vigilance and prying.

[dropcap]S[/dropcap]ome discerning readers have been critical of certain points in my last piece, “Which Sharif Will Tame the Terrorists?” and have been kind to write and inform me of their views. I am grateful to them for enriching not only the debate but also my own thought process.

Two main objections require further comment. One, as a reader wrote me, “Will not what you suggest toward the end of your piece result in the state ultimately policing its populace instead of protecting it?” She extends the same thought by saying that she would not like to live in a state where her life is unnecessarily monitored by a government. The second objection, raised by some readers, is about the state itself. They believe that I use the state as a unit of analysis uncritically.

Both objections are valid, and both are also linked. I believe that they must be tackled such that there is greater conceptual clarity and a clear appreciation of the limits and limitations of any approach, including mine.

Let’s first consider the state. It is a problematic concept and it has been problematized. Not just in terms of its functioning and reach but also in terms of the very idea of what it means and where it can be found. For my purpose, therefore, two points are important: one, I fully understand and appreciate the problematic. The corpus of literature dealing with this problem is too big and known for anyone to evade it. Two, despite problematizing the concept—correctly so—most scholars agree that it nonetheless provides a legitimate unit of analysis in the absence of any other acceptable organizing principle.

In other words, unless we can come up with another principle that can organize socioeconomic, political, and legal life in the way that a state does, we have to make do with what we have. And that is the state. It is also a principle that is almost universally accepted and has been codified by law. What remains, therefore, and which is vital, is to ensure that the state performs its functions in a way that is legitimate. To put it another way, there must be laws and rights codified and put in the constitution of a state that appreciate the tension between collective responsibility and individual rights and try to resolve them as best as can be done.

This takes us from the idea of the state itself to how a state is configured, i.e., what system of government a state is grounded in. Is it a totalitarian state (in whatever form we can visualize the concept) or a democratic one (the form of the system notwithstanding). The debate here is as fraught as the problematic concept of the state itself. Comparative politics essentially, and for the most part, revolves around it.

While it is easy to reject totalitarian systems, democracies offer a bigger problem. They come in different forms and shapes and they can be illiberal, as Fareed Zakaria correctly pointed out. There is yet another subset of the bigger problem, the tension between form and substance. States can have the form of democracy but many can still be closer to totalitarian states in terms of the substance or lack thereof of democracy.

Another problem is recent: the threat to states from nonstate actors, resulting in measures that have begun to erode individual liberties. In established democracies, the phenomenon has been more pronounced and is being debated vigorously with the intellectual rigor the exercise demands.

My point here is that despite all the problems, what should be the unit of analysis? What is it that we accept and on the basis of which we abide by laws, pay our taxes, and cast our votes, even as we remain critical of the system of government and seek to improve it? The state.

This does not, however, take away from the point raised by the critics. Is there a meeting ground? Yes. While we are constrained to use the state as the unit of analysis, we must remain cognizant of all the attendant problems that the concept carries within it. Put another way, we must ensure that the power of the state translates into state authority. It must be constitutional, must be exercised in the name of the people, and the people must be able to set its limits.

This is the ideal line on the graph. In the real world, there will always be, as there have been, swings, sometimes wild swings, on the graph. The American civil war is a good example of that, though not the only one. But the ideal must not be lost sight of.

The other point is, and it is imperative for understanding and streamlining collective life, that no approach is without its limits and limitations. The biggest problem with ideologies, whether purportedly divine or manmade, is the certainty that a particular approach is the panacea for all ills. Nothing can be further from truth. The best approaches are not those that claim to be infallible but those that are alive to their flaws and for that very reason provide spaces for constant debate and monitoring. To understand the functioning of the paradox is to appreciate this central point and vice versa.

Having argued these points, let’s now consider the extent to which a state must be granted the right to monitor its citizens. This issue does not offer much of a legal challenge when circumstances are normal and when the state’s legitimacy is accepted by most, even if not all of the people that reside within its territorial bounds. But two factors have disturbed the quiet of our collective lives: terrorism, and technology. Not only are states threatened by nonstate actors, the diffusion of technology, the communication revolution, has already changed our lives, and not always for the best.

The best approaches are not those that claim to be infallible but those that are alive to their flaws.

The paradox strikes again. The very technologies we use also allow nonstate actors as well as states to intrude in our lives. The webcams we use for Skype can also be used to monitor our activities. We can send messages in real-time with the click of a button and the same messages can be read by someone monitoring us. We use cellphones to communicate; the same device can be used to trigger a bomb. Techies know that we are just a few steps short, if at all, of what Orwell, Huxley or Foucault visualized for us.

Add to this the menace that an idea cannot be dis-invented and we are deeply troubled. The more threatened states and societies will feel, the more easily states will chip at individual freedoms. The process is already well underway. One can begin to discuss a broader strategy to get rid of the nonstate actors by advising states to move from firefighting to removing the causes that force some people to resort to violence. (N.B.: that in and of itself will not eradicate violence but could help in scaling it down.) Even so, we are left with the comforts and ravages of technology.

Frankly, I do not see any neat solution to the problem technology offers. The reason is simple: we are hooked on the comforts it provides. Most of us do not even remember how we lived just 10 years ago. And we believe, wrongly, that the comforts outstrip the ravages and the challenges. Incredibly naively, we also believe that somehow we should be able to conquer the paradox it offers and enjoy the comforts without the downside of technology. Here’s the bad news: that’s not possible.

The only partial solution is constant awareness and constant monitoring of what states are doing. That’s not an ideal solution but it’s nearly the only one short of going back to the old world.

Finally, the point about our state and what I proposed. Our state’s problem is not that it is a strong state but that it is a hard state, to quote Nazih Ayubi. A strong state is a constitutional state with the ability to exercise authority where and when needed. A hard state can be ham-handed without the ability to do what it is supposed to. The state in our case has abdicated the responsibility to protect its citizens even as it remains inefficiently coercive in other areas of life. It cannot enforce laws; it cannot track its citizens (the other extreme from the problem of too much tracking); it seems helpless before the nonstate actors threatening it.

So, while I am fully aware of the problem of a state monitoring peoples’ lives, given the situation we are faced with, there is a clear problem at the other end of the spectrum. The policy we require must seek to create a balance. Hence my insistence that the formulation of any such policy should involve experts from various fields, including jurists, to ensure that laws do not intrude where they shouldn’t and still be effective where they must.

That is not an easy task, but it must be done. And we must do it with a clear realization that every approach has a tradeoff. You can either have your cake or eat it.

The best approach is to take the fight to the terrorists, to not capitulate at any expenses, to be willing to sacrifice at least a million people to the fight, to create a massive intelligence force, armed with the best in spy technology, to never ever talk to the Taliban under pressure. I am ashamed that Pakistani leaders are so afraid and cowardly that to save their own interests they do not think twice how bad they make the rest of us look. You capitulate once to terrorists and you have to capitulate forever, after the Taliban some other group will surface you watch it, with some other demands because now they know you are weak, a few well placed bombs will get them whatever they want, this is a digrace, Imran Khan is a disgrace, and the entire Pakistani leadership is a disgrace.