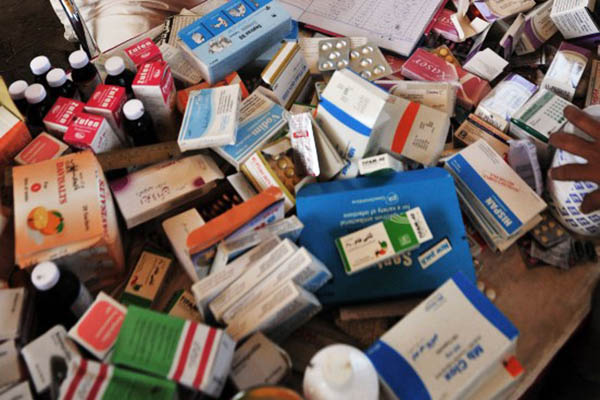 Private entrepreneurs are plugging the gaps in the state’s battle against counterfeit medicine.

Pakistan is no stranger to counterfeiting. From books to art to food to clothes and even medicines, the country is rife with substandard—and cheap—copies of brand-name products. But while books and art merely violate intellectual property copyrights, fake medicine can kill. It is the responsibility of the Drug Regulatory Association of Pakistan (DRAP) to safeguard consumers and ensure tainted medicines are not circulated in the marketplace. The organization’s fight seems endless, as counterfeiters operate with impunity across the country. But there is hope. DRAP has a secret weapon—and it lies with the private sector.

In 2012, a batch of contaminated prescription drugs was distributed among 46,000 patients at Lahore’s Punjab Institute of Cardiology (PIC). The tainted medicine, dispensed under an expired manufacturing license by Efroze Chemicals—which is still in operation—left over 120 patients dead and proved the extent to which counterfeit medicine had proliferated in Pakistan. Two years earlier, then interior minister Rehman Malik had warned Parliament that “45 to 50 percent of Pakistani drugs are fake or substandard.”

At the time, lawmakers attempted to portray the PIC case as an outlier. But the World Health Organization has reported over 1 million deaths worldwide annually can be attributed to counterfeit medicine. In April 2016, over 100 cases of spurious drugs were registered in Khyber-Pakhtunkhwa alone. Similarly, in Punjab province, over 130 pharmacies operate without a certified pharmacist, and reports of shortage of essential drugs in Islamabad are commonplace. Many incidents are also routinely ignored, with media coverage focusing on mass deaths and not the prevention of future tragedies.

Despite the grim outlook, owed in part to Pakistan’s Ministry of National Health Services’ negligence in monitoring the supply and distribution of medicines in the country, a more holistic approach is required to ensure consumers’ best interests. ProCheck, created by Saim Siddiqui, is one tool being adopted by businesses and consumers alike to verify the authenticity of medicine.

ProCheck provides manufacturers with unique codes that can be incorporated into packaging and verified via SMS by concerned buyers. The start-up matches the consumer texts to codes supplied to manufacturers, creating an efficient supply chain management system while giving consumers ease of mind. It’s a no-hassle solution, and local manufacturers are starting to sign on, says Siddiqui.

“Initially, there was a degree of skepticism,” he says, adding that some “forward thinking” groups such as Ferozsons Labs and the House of Habib have advocated for the initiative and gained “visibility and credibility in the market, with one client seeing a double digit increase in sales after implementing ProCheck’s solution.”

With national statistics on spurious drugs ambiguous at best, Siddiqui explains that organizations such as his tend to rely on data provided by the WHO. This methodology comes with its own pitfalls, including generalized data more reliant on regional or global statistics than local concerns, but it’s a start. According to Siddiqui, ProCheck has booked orders to protect over 40 million products since its launch in 2014, but hopes it’ll hit the 100 million mark by the end of this year.

While ProCheck’s primary aim is to protect the consumer from administering fake drugs, it is a short-term fix. Regulation of the supply side remains murky, which is where a growing repository of online retailers hopes to plug the gap. Dawaai.pk, Pakistan’s first online pharmacy, was created to deliver unadulterated medicine to your doorstep. Launched in 2014, the e-retailer has evolved into a multi-faceted enterprise, recently launching well.pk, an offshoot of the parent website that caters to health and nutrition.

Furquan Kidwai, the 31-year-old entrepreneur behind Dawaai, told Newsweek his start-up’s customer service, strict compliance with government regulations and engagement of credible manufacturers allowed them to deliver unadulterated products to customers. But he laments the state’s lax attitude toward regulation as a persistent barrier to delivering quality products. “It [regulation] is in shambles,” he says from his office in Karachi.

Kidwai claims price regulations instituted by DRAP have resulted in shortages of lifesaving medicines, including drugs to treat stage-four cancer. He says a lack of retail regulation is also harmful. “You can easily find prescription medication over the counter in Pakistan. This is because of a lack of willingness to implement regulatory policy, rather than its absence.”

Citing the example of Centrum—the world’s most popular multivitamin supplement—Kidwai says it is locally available for about Rs. 150 to Rs. 200. “The same medication made by the same company’s foreign business retails for Rs. 1,500 to 2,000 and people still opt to import it. These medicines are often transported in suitcases that can damage the packaging and contaminate them,” he adds. In these situations the imported Centrum, says Kidwai, is far more likely to be substandard, but the Pakistani mindset of “imported is better” prevents most people from realizing this.

Kidwai says the government has the laws in place, but without more stringent implementation, they are hollow and offer little to the public. Rival e-retailer Sehat agrees.

Pakistan’s pharmaceutical market is one of the “highly, highly regulated industries in the country; from the raw materials to the distributor,” with strict regulations in place since the Drugs Act, 1976, says Sehat’s CEO Nadir Mumtaz. The problem, he reiterates, is not regulation, but its implementation. “People find shortcuts. Obviously you’re supposed to keep medication of all sorts under 25°C. Some drugs are to be specifically kept between 2-8°C, which is fairly costly. A lot of people cut corners here.”

A corporate entity of Apothecare Private Limited, Sehat caters to people with long-term illnesses that require multiple doses, thereby ensuring a consistently safe product for its user base. It also provides vaccinations, which must be maintained carefully to prevent spoilage. According to Mumtaz, his company started conducting market research into the spurious medicine industry in 2011—a year before the PIC incident. A tour of the company’s main facility evinced stringent measures to maintain viability of medications, including temperature control, innovative packaging, and individual tagging. The company’s credibility has been bolstered by international confidence with it being the exclusive Pakistani distributor of several drugs such as Clozaril (antipsychotic), Ferinil (thalassemia treatment) and Myhep (a Hepatitis-C prescription).

Mumtaz’s experiences also highlight how beneficial e-retail can be to identifying and isolating spurious medicine manufacturers. Sehat maintains its own database with details on where each batch of drugs originates, when it is sold and whom it is sold to. This type of bookkeeping, says Mumtaz should appeal to Islamabad as data gathering at brick-and-mortar pharmacies is nonexistent. A central database could be a game-changer for eradicating counterfeit medication, preventing diseases and drug abuse in the long run. Citing the same lack of book-keeping, Mumtaz also questions how the government can claim 20 to 60 percent of medication in the local market is spurious, adding there is no verifiable depiction of what the counterfeit market looks like.

DRAP was founded in November 2012 following amendments to the Drugs Act, 1976, that are aimed at “providing effective coordination and enforcement” of pre-existing laws. Based in the federal capital, the organization’s primary aim is to eradicate spurious medication nationally. The revised Drugs Act lays down guidelines on dealing with the manufacture and sale of counterfeit medicines, including penalties for violators, which can include imprisonment of up to seven years and a fine of up to Rs. 500,000. It also outlines procedures that must be followed to ensure manufacturers and distributors are adhering to internationally recognized standards as mandated by WHO and the U.S. Food and Drug Administration.

The revised Drugs Act also empowers DRAP to “undertake awareness campaigns regarding prevention of diseases, patients rights, healthcare privileges etc., through media, seminars, publications, and other available means of information technology.” Despite this cohesive and comprehensive policy, the organization has been unable to properly educate the public about the prevalence of spurious medication in local markets—either due to inability or unwillingness, with some proponents suggesting the common man may opt to avoid medication altogether if faced with the persistent threat of spurious medication. This is a logical fallacy and implies the organization does not trust the consumer to make an educated decision based on data that should be freely available for all.

Tarar remains undeterred, saying she is confident the government can help the pharmaceutical sector in eradicating spurious medicine and helping local manufactures gain traction in international markets. In May 2016, she announced a Rs. 145-million government pledge to improve and accredit the Central Drugs Laboratory with the WHO. Even so, PPMA member and managing director for Getz Pharma Khalid Mahmood says government spending on education and healthcare remains far lower than required.

A key barrier to effective regulation, say stakeholders, is the lack of reliable statistics on the pharmaceutical market. While start-ups are curating their own repositories to keep track of serial counterfeiters, government bodies still appear to lack effective tools to tackle spurious drugs. Without a central database armed with up-to-date statistics on the country’s counterfeit trade, DRAP is akin to a gun without any ammo. Recent media reports have shown the threat of counterfeiting is on the rise, but unless brick-and-mortar pharmacies are held accountable for what they sell and to whom, there is no solution.

For now, there is hope for those willing and able to purchase medications online. But that is a small percentage of Pakistan’s overall population—less than 25 percent of the country’s 200 million residents have access to a reliable Internet collection. Islamabad must ensure all Pakistanis have the peace of mind to purchase medicines without fearing death rather than salvation. Private sector start-ups can only do so much. Their efforts might help bandage the existing information gap, but the wound will remain open.