Home Culture The Struggle for Ahmedabad

The Struggle for Ahmedabad 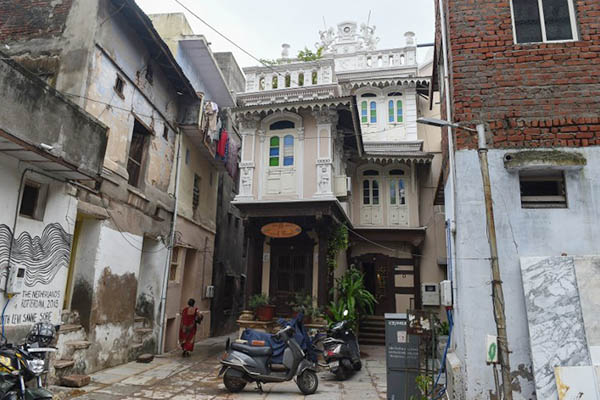 India’s heritage city races to save icons from polluted ruin

Traffic chokes the centuries-old stone archway into Ahmedabad’s historic quarter, the snarl of honking rickshaws and sputtering buses coats the monuments of India’s only heritage city in a greasy layer of soot.

Conservation experts warn Ahmedabad, one of the world’s most polluted cities, faces a mammoth task defending its newly won UNESCO status as its fragile cultural icons decay under neglect, traffic and trash. The 600-year-old enclave was named India’s first ‘World Heritage City’ in July—despite warnings from some of UNESCO’s own experts that it lacked a convincing plan for protecting its ancient citadels, mosques and tombs.

Ahmedabad hosts the towering Bhadra fort, the legendary stone latticework of the 16th-century Sidi Saiyyed mosque, and countless relics fusing the unique Hindu and Muslim architectural styles of its conquerors. Authorities hope the global recognition from the U.N.’s cultural body will restore community pride in the crumbling, garbage-strewn old city.

“They themselves also will be slightly more restrained in dirtying the places,” said P.K Ghosh, chairman of Ahmedabad Municipal Corporation’s heritage conservation committee, of the city’s inhabitants. But many families that once fastidiously tended to ornate wooden homes in the old city are leaving in droves for the comforts of the modern city outside, tired of shabby living conditions.

Jagruti Vyas, a long-term resident, hoped the UNESCO listing would bring standards in her dilapidated neighborhood into line with newer areas beyond the old city’s walls. “We hope to see similar changes, such as this part of the city becoming cleaner,” she told AFP from the narrow doorway of her wooden home.

But it is the pressures of modern Ahmedabad—the chronic air pollution, crushing traffic and chaotic urban sprawl—that experts say are also rapidly eroding its cultural capital.

The cramped heritage district was never built for cars, yet today thousands of trucks and rickshaws are diverted through its narrow lanes and alleys. The grinding congestion tears apart roads and fouls the air with fumes, streaking stone-carved monuments with black exhaust stains.

Long-flouted laws banning construction near heritage sites have also hampered efforts to save Ahmedabad’s treasures from ruin. In the heart of the old quarter, just the dome of a medieval mosque is visible behind a tangle of shops, electricity wires and flats illegally erected around the sultanate-era relic.

Ornate homes have been torn down and replaced by garish structures “totally incongruous” with history, said Ghosh. He said the heritage listing would give teeth to those safeguarding Ahmedabad’s architectural heritage. “There will be stricter enforcement of the rules. Pulling down the exquisite old architectural pieces will not be easy now,” he said.

Some long-neglected quarters, sealed off from the outside world by labyrinthine alleys, are well beyond restoration. Many traditional ‘pols’—clusters of settlements identified by UNESCO as bearing “enormous” historical value—are all but abandoned, the iconic wooden homes collapsing from neglect.

A small boy was injured in October when a balcony caved in, while at least two people died in July when monsoon rains brought whole houses crashing down, media reported. Once grand havelis—beautiful multi-level wooden mansions—are being rented to poor migrants and businesses looking for warehouse space.

Conservation architect and old city expert Khushi Shah said Ahmedabad was “one of the most unique urban settlements in India” that could not be recreated once it was gone. “The city which we call a ‘living heritage entity’ will no longer be so if people start moving out,” she told AFP.

UNESCO could revoke or downgrade Ahmedabad’s listing to “heritage in danger” should the deadline be missed and the committee fail to show it has slowed the decline and destruction of the old city.

Jigna Desai, associate professor at CEPT University’s architecture faculty in Ahmedabad, said the coveted UNESCO inscription would mean little if there was nothing left to protect. “How do you make sure that this evidence does not deteriorate, that the evidence stays for the world to see, or the next generations to see?” she told AFP.

Ghosh’s deputy at the heritage council, P.K.V Nair, agrees: “Getting the listing was one thing, now meeting that challenge is more important.”