The Tale of Timbuktu’s Shrines 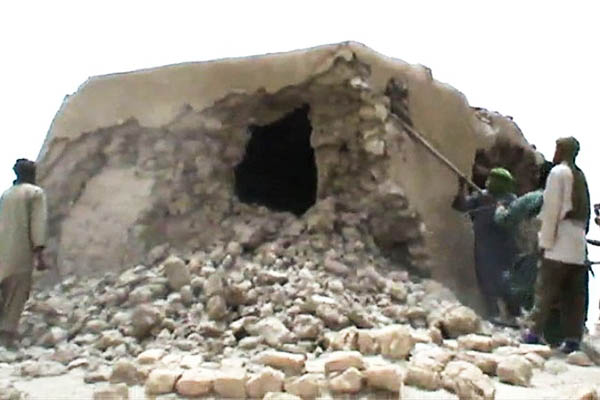 Trial of jihadist charged with destroying 14 shrines begins next week.

The trial of a Malian jihadist charged with war crimes for ordering the 2012 destruction of 14 mausoleums of Muslim saints resumes next week at the International Criminal Court (ICC). How did the monuments come to be considered so important and why were they destroyed?

What is the history of the mausoleums?

The 22 mausoleums of Muslim saints located in Timbuktu’s cemeteries and mosques date back to the ancient caravan city’s golden age in the 15th and 16th centuries as an economic, intellectual and spiritual center. The city’s inhabitants believe the tombs protect them from danger and appeal to the saints for help. Thirteen of them became UNESCO-protected in 1988.

The earthen mausoleums were constructed after the tombs were re-opened by those who believed they could gain power from proximity to the saints’ remains, said El-Boukhari Ben Essayouti, who oversaw the reconstruction of the sites.

Some date back as far as the 14th century.

The tombs’ construction was undertaken by anonymous groups of family members or disciples of the saints, said Ben Essayouti. In the centuries that followed, their maintenance and upkeep was taken on by descendants, local residents and patrons of the sites, he said.

Why are they revered?

The tombs’ inhabitants are roughly equivalent to Christian saints, according to Malian experts. People would come to ask them to intervene for marriages, to make the rains come, and to prevent famines.

UNESCO describes them as “pilgrimage sites for Malians and neighboring west African countries.”

Islamist fighters desecrated the centuries-old shrines using pickaxes and chisels after seizing the city in April 2012.

On trial next week for his alleged role in spearheading the destruction is Ahmad al-Faqi al-Mahdi, a member of Ansar Dine, a mainly Tuareg group which held sway over Mali’s desert north. Dine allied with Al Qaeda in the Islamic Maghreb and a third local group, until being routed in a French-led intervention in January 2013.

Why did they do it?

The jihadists considered the shrines, as well as priceless ancient manuscripts, to be idolatrous. The Islamists also swiftly implemented a version of Islamic law that forced women to wear veils and set whipping and stoning as punishment for transgressions.

Why is the ICC case important?

The case is the first to be brought by the world’s only permanent war crimes court over the extremist violence that rocked Mali in 2012 and 2013. It is also the first time that a jihadist has appeared before the court in The Hague and the first ICC case to feature the destruction of religious buildings and historical monuments.

Faqi will learn if he is to face trial on Tuesday, March 1.

What happened to the mausoleums?

The reconstruction of the shrines began in March 2014, relying heavily on traditional methods and employing local masons.

To make sure the rebuilt shrines matched the old ones as closely as possible, work was checked against old photos and local elders were consulted throughout the process—an important step in a city where culture has traditionally been passed on by word of mouth.

Several countries and organizations financed the reconstruction, including UNESCO. Work finished on the site in July 2015, and a ceremony marking the completion was held on Feb. 4, 2016. Five head of cattle were ritually sacrificed just after dawn, ahead of a reading of the entire Quran and the handing of the keys to the families in charge of their care.