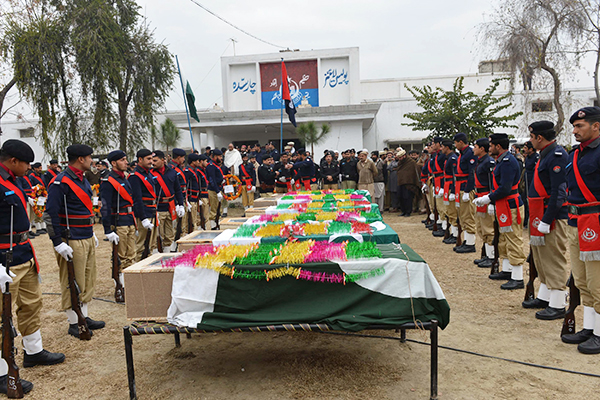 Funeral for policemen killed last month in Charsadda. A. Majeed—AFP

The militants want to drag on the ‘peace’ talks process.

On Saturday night, the Pakistani Taliban announced a five-member non-Taliban team to interface on their behalf with the government’s four-member committee for the proposed peace talks. The development is outrageous but not entirely unexpected.

Prime Minister Nawaz Sharif announced a fresh go at peace talks on Jan. 30 when most assumed he was going to announce a military operation against the terrorists. Sharif was criticized, but he needed to begin with the policy of negotiations because his hands are tied politically. There’s no political and public buy-in for a military operation and there can be no campaign without it.

One of the reasons that political parties do not have the stomach for a fight is because this government has no viable policy to handle the reprisals that the Taliban will visit on urban centers, especially in the Punjab. Those who believe talks will go nowhere and those in the majority who argue vociferously, and often naively, that talks will somehow restore peace continue to talk past each other.

So it is important to do something which can establish the reality of the situation empirically. It is essential to monitor the Taliban’s actions and reactions every step of the way—as also the inputs of those parties and leaders who have a vested interest, partly or wholly, in the Taliban’s agenda. That is the only way rational minds can see through the game. The Taliban’s latest demand flies in the face of negotiating etiquette, regardless of the merits or otherwise of the people the government chose.

When two sides, roughly equally poised, come to the table, no one brings preconditions. Or if they do, to establish good faith, they can fulfill one or two demands each in order for both sides to prepare grounds for dealing with more substantive issues. But at no stage can any side demand to be given a say in how the other side is going to form its negotiating team or impose unwilling participants in the process.

A simple litmus test of the Taliban’s “good faith” would be for the government to demand that it will vet the nine members who are to form the Taliban’s own team and suggest additions, subtractions or replacements. There are no prizes for guessing how the Taliban will respond to such a demand. Islamabad can then tell the other side that it reserves the exclusive right to nominate members of its own negotiating team. It must be noted that this requirement is not procedural but fundamental to negotiating, if not from a position of strength, then as a party equally poised. In plain English, the Taliban can either take it or lump it.

The Taliban are in no hurry. They would like to drag this exercise for as long as they can. The Army had begun to pummel them in North Waziristan and they needed a respite. The longer the talks drag on, the more time it gives the Taliban to reorganize and prepare for their war. The longer the process takes, the easier it will be for the Taliban and their sympathizers to compound confusion. For the government, the exact opposite is true. It needs to bring violence down and, if the talks don’t go anywhere, opt for the use of force. It cannot afford to allow talks to drag on and for the other side to sow more seeds of discord.

These developments must, therefore, be closely monitored, especially if we want to have an empirical record of how the other side is negotiating or wants to negotiate, if at all. Talks cannot just be about talks; the Taliban must also walk the talk.

This piece has been amended in view of the Taliban’s subsequent formal statement that they want a fresh five-member non-Taliban committee to act as a buffer between them and the government’s four-member committee. The earlier version of this piece, based on information from the Taliban late Saturday, said they wanted the government committee’s membership raised from four to nine.