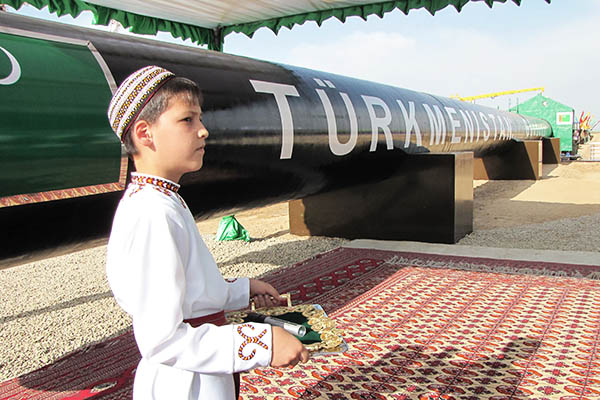 The risks are huge, but so are the potential rewards, as plans advance for a pipeline carrying natural gas from Central Asia to energy-hungry South Asia through the wilds of Afghanistan and Pakistan. Stretching 1,700 kilometers from the gas fields of Turkmenistan to the fast-developing northwest region of India, the Turkmenistan-Afghanistan-Pakistan-India pipeline is an ambitious infrastructure dream that could transform the region’s fortunes.

Pakistan and India are desperate to boost their energy supplies, and the TAPI pipeline also offers a lucrative money-earning opportunity for Afghanistan as international aid funding declines in the years ahead. All three countries have signed contracts with Turkmenistan, where one sixth of the world’s natural-gas reserves are believed to be deposited deep underground.

But Turkmenistan, which was part of the Soviet Union until 1991, is an isolated autocracy, and it is proving a hard negotiating partner in the crucial months before the NATO military pullout from Afghanistan is completed by the end of 2014. “We always talk about Afghanistan as a bridge between Central and South Asia, and this would be the first example to be implemented and prove we can do regional integration,” said Abdul Jalil Jumriany, policy director at the Afghan mines ministry. “Right now the ball is in Turkmenistan’s court. Afghanistan, Pakistan, and India, all of them have thrown in their support as much as they can.”

The challenges are formidable: not just strained regional relationships and the tough physical terrain, but also instability in remote areas where governments in Kabul and Islamabad have little control. The route goes through the Taliban heartland of Kandahar in south Afghanistan and then through the volatile Pakistani city of Quetta and the fringes of the Balochistan badlands, where separatists are fighting a low-level insurgency against government forces.

“I bet we will not have security issues,” said Jumriany, as pressure increases for a peace deal with the Afghan Taliban, who are now fighting the Afghan Army in the field as much as U.S. troops. “When we start the construction of this pipeline, it will be beneficial for everybody in the region. Everything is moving in a positive way.” Jumriany said Turkmenistan was now drawing up a shortlist of companies from which the three other countries could choose their preferred bidder.

Werner Liepach, Pakistan country director for the Asian Development Bank, which is helping coordinate the grand scheme, struck an upbeat note this week, telling reporters that many arrangements had finally been worked out. “I am very confident that this pipeline will go forward and we expect the gas to flow [at the] latest in 2018,” he said.

But it remains unclear who would agree to invest the $7.6 billion needed to build the TAPI pipeline. U.S. giants Chevron and ExxonMobil, Malaysia’s Petronas, and British Gas have expressed interest, according to sources close to the project, but their primary goal may be long-term access to Turkmen gas fields. “There is interest in the upstream [exploration and production]. There is no denial about it,” said Mobin Saulat, director of Inter State Gas Systems, the company commissioned to manage the Pakistan section of TAPI. “The issue is not about the availability [of funds], but how much confidence the investors feel about these projects.”

Highlighting the difficulties that beset cross-border pipelines is the troubled Iran-Pakistan project from the offshore gas field of South Pars to Karachi, Pakistan’s economic hub. Earlier this year, Iran finished its portion of the pipeline, but reports say it has canceled a planned $500-million loan to help build the Pakistan part—effectively scuppering a project that had been due to go into operation next year. The U.S. is also clearly opposed to the $7.5 billion, 1,800-kilometer Iran-Pakistan pipeline, with Iran under heavy U.S. sanctions. “It’s in their best interest to avoid any sanctionable activity,” said a U.S. State Department spokesman recently, referring to Pakistan’s involvement.

For Didier Chaudet, a visiting fellow at the Islamabad Policy Research Institute think tank, the TAPI pipeline dream is threatened by India-Pakistan rivalry and politicking over the Turkmen gas fields as well as the risk of militant sabotage. “There seems to be a block over the question of foreign shares in Turkmen gas fields,” he said. “And what company would be strong enough to lead a coalition of Indian and Pakistani partners?” Chaudet also suggested that the Taliban might be persuaded to resist attacking the TAPI pipeline by its supporters in Pakistan.

“If the project is successful, the entire region could take off economically,” said Salman Shah, former finance minister of Pakistan. But Indian strategic-affairs expert Bharat Karnad suggested that any hopes the pipeline could soon surmount its many difficulties were misplaced: “This project can be [considered] nullified until the conflicts in the region are resolved.”