Home Lightbox The Travel to Truce

The Travel to Truce 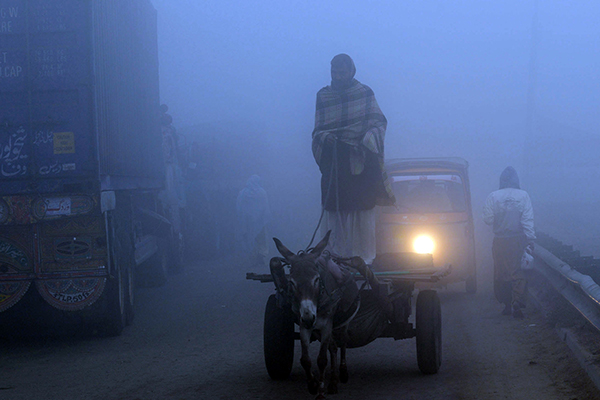 Islamabad has another go at peace talks.

Prime Minister Nawaz Sharif spoke in the National Assembly on Jan. 29 after a six-month hiatus. His speech focused on terrorism. He talked about gratuitous Taliban attacks and killings despite peace overtures from the government, stressing that if force is used, the entire nation will support that effort. Despite Taliban excesses, Sharif argued, his government wants to give peace a chance in full earnest. To this end, he announced the formation of a four-member committee which will initiate the process with the Tehreek-e-Taliban.

Despite my own reservations on peace talks, and notwithstanding the criticism of the move, it is an effort that should be allowed to mature. Sharif’s speech came in the wake of four developments:

1. After the Taliban struck military targets three times in quick succession, the Army retaliated with airstrikes and surgical ground attacks against Taliban leaders and fighters in North Waziristan. It is no coincidence that immediately after the strikes, the Taliban indicated that they would like to talk if the government shows good faith.

2. On Jan. 27, Sharif met with his party’s legislators. There were two items on the agenda: the economy, and terrorism. The members were briefed by finance minister Ishaq Dar and interior minister Chaudhry Nisar Ali Khan, who laid before the Muslim League (Nawaz) M.P.s the ‘achievements’ of the Taliban so far. Khan also mentioned that while he had authentic evidence that the attack on the church in Peshawar and other attacks that followed that heinous act were mounted by the Taliban and its affiliates, seeing the public reaction, the Taliban decided to not own up to them. However, when an informal vote was taken on how to deal with the Taliban threat, the legislators stood divided.

3. When the military hit back against the Taliban, opposition parties, especially the Pakistan Tehreek-e-Insaf, argued that the government was again planning a military operation without taking anyone into confidence and going against the decision of the all-parties conference to talk to the Taliban.

4. The military, after the initial retaliatory attacks against Taliban targets, asked the prime minister to take ownership of the war. Sharif indicated to the military that his hands were tied and the only way to get a public buy-in would be to start a dialogue process and follow it up, if necessary, with use of force.

Sharif’s announcement should, therefore, be seen in this context. It will be hasty, and somewhat irrelevant, to say that this process will get nowhere. There is merit in the argument. The positions are irreconcilable at this stage. However, the very fact that it might not get anywhere is an important one in putting to rest the current argument that the state has never given peace a chance.

There are three possible scenarios in the wake of this move. One, the talks will fail (highly likely).Two, the talks might succeed in relation to groups X, Y, Z and fail apropos of groups A, B, C (somewhat likely). Three, they might succeed (highly unlikely).

In the first case, those who argue that the Taliban are a force that wants to capture the public space in Pakistan will have a quantifiable argument. In the event of the second possibility, the state will be able to isolate the reconcilable from the hardline groups. In the third case, everyone wins.

Pakistan is currently divided between those who think talks are the only way out and those who refute that argument. Both camps talk past each other. The only way to settle this, to some extent, is to let the peace-talks scenario unfold, and watch. If the Taliban show intransigence, at least it will be easier to convince those of the use of force who presently reject it and assume that talking in and of itself will solve the issue.

Sharif is a politician. And while he sits atop a sizeable majority in Parliament, he cannot operate without creating political space for military action. The military, for its part, while straining at the leash to settle scores with those who have killed soldiers with impunity, nonetheless, needs public support.

Another issue has to do with the argument that this war would not have started if former president and Army chief Pervez Musharraf had not given in to U.S. demands after 9/11. The related argument is that it is a war a dictator foisted on this country. The counterfactual of how Sharif would have acted if he were in the saddle at the time does not work because he wasn’t and that makes any assumption only a matter of conjecture and liable to be rejected.

With this latest move, Sharif has created space for himself, and also, if subsequently required, for a military operation. One of the demands from the government is that the Taliban cease attacks, including on hard targets. That throws the ball in the Taliban’s court. If they really want to talk, they will have to ensure that. Asmatullah Muawiya, the commander of the Punjabi Taliban group Junood-e Hafsa, has already welcomed Sharif’s speech.

However, one problem still remains. Most of the Punjabi Taliban groups, most notoriously Lashkar-e-Jhangvi, are also sectarian killers. Will they stop killing the Shia? There are, of course, a number of questions one can raise with no answers at this stage. For instance, how will the committee work? What will its terms of reference be? What kind of committee will the Taliban set up? Will the Taliban, at some point, reject the government’s committee in toto or partially, and if that happens, how will the government respond? Will this committee only work as a conduit? What will be the negotiating positions?

These are just some of a complex web of questions. On May 21, 2013, in a column for The Express Tribune, I subjected the idea of talks to a detailed examination using the negotiation theory framework:

“…while the TTP may not have defeated the state, by not allowing the state to win, the TTP has dispossessed the state of its domination. The next step will be distributive. Who will get what share of the pie? Because once the state concedes its inability to retain its monopoly on violence, it has to enter the process of give and take. And what it can take, in theory, must be less than what it possessed before the conflict began. For the nonstate TTP, whatever it can get is a gain against the state. It must, therefore, be clear to Mr. Sharif, as also to those too eager to talk to the TTP, that negotiating with that entity without forcing it to seek peace unilaterally and then talking to it, means the two sides come to the table as equals. If the coming government is comfortable with that thought, we shall continue to the next stage.

“Such negotiations cannot be integrative, i.e., the two sides cannot increase the size of the pie. They have to be distributive. What will the state bring to the table? We already know what the TTP’s demands are. They have been made abundantly clear and start by rejecting the very basis of the Pakistani state and its institutions. Is the state prepared to do that? What is the nature of the terrain in the bargaining zone, accept if we do that such a zone in fact exists? Mr. Sharif will have to figure out the space between the state’s minimum reservation point and the Taliban’s maximum reservation point—and vice versa.”

This, then, is a cursory presentation of the degree of difficulty the peace-talks process faces. Yet, at this stage, Sharif did not have much option but to play this hand. Anything other than this would have been politically infeasible. Negotiations are now afoot. Let them take what course they will before the country settles on a discourse that is not so terribly divided on the issue.