The Treason of Calling Terrorists Martyrs 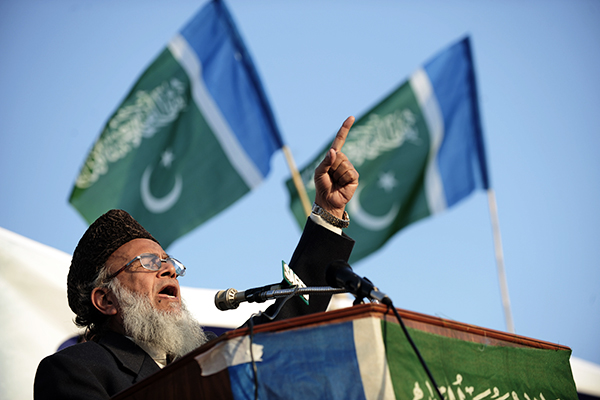 The Jamaat-e-Islami has some explaining to do.

Jamaat-e-Islami’s Khyber Pakhtunkhwa chapter chief, Prof. Mohammad Ibrahim, says Hakimullah Mehsud and his companions who were killed in a U.S. drone strike on Nov. 1 are martyrs. They are martyrs, he says, because “they were eliminated when they were in the process of dialogue for permanent peace [sic] in Pakistan.”

Ibrahim’s statement, which doesn’t come as a surprise, nonetheless raises many questions. But first, a word about Jamaat’s position: The party, while trying to stay in the mainstream, has made many Freudian slips on where it stands on Al Qaeda and the Taliban. Intelligence reports over the years have determined a clear connection between many Al Qaeda terrorists and Jamaat leaders at various tiers. One of its Khyber Pakhtunkhwa leaders, Siraj-ul-Haq—who was a senior minister in the Muttahida Majlis-e-Amal government and is the Jamaat’s pointman again in the coalition government in the province with Pakistan Tehreek-e-Insaf—was very close to Pakistani Taliban commanders in Bajaur, including Maulvi Faqir. Ditto for Haroon Rashid, another Jamaat leader from Bajaur.

When Osama bin Laden was taken out in a U.S. raid in Abbottabad, several Jamaat leaders publicly declared him a martyr. The party’s position is therefore clear even as it continues to present itself as a moderate political force and resorts to dissembling and lying on television programs and in the rightwing press.

The Pakistani government, and by extension the Pakistan Army, has a clear position on Al Qaeda as well as on the Tehreek-e-Taliban. Despite an ill-thought move to talk to the Taliban, that position, legally and constitutionally, remains unchanged. The Army continues to operate in the federally-administered tribal areas under Article 245 of the Constitution and has, over the years, lost thousands of soldiers in this fight. Intelligence reports also indicate activity of hostile agencies in the area and the links of various groups that are a part of the Taliban franchise with these agencies.

At the minimum, therefore, the government needs to call the Jamaat out on its position. This step can also be taken by the Army, which can petition the Supreme Court against Jamaat’s position which clearly runs contrary to that of the state and its Constitution. The Jamaat emir, Syed Munawar Hasan, unless he is in agreement with Ibrahim, needs to clarify Ibrahim’s words and remove him for taking a treasonous stance on the issue. If Hasan does not do that, Ibrahim’s statement should be deemed to be the official position of the Jamaat. In that case, the petition must also name the Jamaat emir and the party itself.

War-fighting requires a clear friend-enemy distinction. This war cannot be won until the terrorist can be dislocated from the context that strengthens him. Fighting among the people, which is what this irregular war is all about, must also understand the importance of audiences as also of communicating messages. Jamaat’s position and its agenda must therefore be seen in and through the interpretive structures that seek to influence the discourse. In this case, the discourse is being influenced in favor of a terrorist outfit and against the state. A state can afford to ignore such signaling only at its own peril.

Given the urgency of the situation and the looming threat, the state of Pakistan, represented by the Pakistan Muslim League (Nawaz) government at this point in time will have to move fast and with resolve to put down attempts by individuals or entities, political or otherwise, to muddy the waters and present terrorist groups as examples to be emulated.

Of course, the state must utilize its legal structures to do this. The Jamaat must be given the opportunity to present its viewpoint and the issue should be fairly adjudicated. What is important at this point is to signal to sundry elements who want to have their cake and eat it too. They cannot be allowed to play on both sides of the fence.

Haider is a senior journalist who has held various editorial positions. His areas of interest include defense, security, foreign policy, statecraft, political theory, and literature. You can follow him on Twitter for updates.

The army will not be going to the courts, but perhaps you can.

Its one sided story. Who are taliban and armymen? Are not both muslims and pakistani? Army is with America in against of afgan muslims and talibans are with afgan Muslim in against of America. Who will decide that who is right and who is wrong? Everybody is supporting his liking but not justice. Don’t blame only JI, give your views about army and America and their role. Are they fair in their all actions.?

I think Mr. Ejaz has been a soldier too. He knows very well the relation b/w JI & military. So it is ridiculous to expect petition against JI by Military.

JI is the only political party which is democratic and has it’s own indipendent opinion on issues, leaders are corruption free and of middle class having no corrupion allegations.

Does JI believe in the constitution of Pakistan?

Very well written! Finally someone is talking sense. More from him

JI and now JUI-F both are calling Mehsud a martyr. What is this country coming to???

What Pakistanis sow in the last 6 decades, now it is time to cut.

Ejaz haider is known to have contacts with the army and ISI!!

Calling a spade a spade. finally

First of all decide Hakeemullah was a patriot pakistani or a traitor if he was a patriot and martyr why he killed many innocent people and soldiers of Pak. Armed forces and denys the democratic system and constitution of Pakistan and head money for what announced on him ? if he was traitor why political leaders crying and declaring him martyr what cause for he took arms against the state was he a citizen of Pakistan,and if he was a Triator why not article 6 moves against those who supporting Hakeemullah Mehasood . the truth should be before the people and media is not plying its role to show his real character before people who will solve this riddle of duplicate policies in the country whatever people should now every truth.there lies the salvation of Pakistan.he should be declared guilty or innocent through facts showing to the people because a confusion spread by the politicians and media in the country.

It is very shocking that such pseudo-intellectuals are given space to write in such responsible magazine. This piece of writing is nothing more than like I hate someone and I without being sensible starts to shout hate words for anyone. All religious and political parties are of secondary stakeholders in this bloody war on terrorism. Such statements from Jamat or any other political party are not of such importance. The mother of all evils is the unclear and dual role of security establishment. You have mentioned that Jamat called Osama Bin Laden as martyr. I think if we stitch to this point, obviously it was our army which have given sanctuary to Laden-the icon figure in war on terrorism
So, simply sloganeering such petty issues is not the solution to problem. Ultimately, we all know khaki wardi is final authority in this whole thing.

Laughable at best and worst both. They are close to the level of shaping the foreign policy of an ideological castle called Pakistan. All this is a drama as many are happening around without carrying much or any reason or to stupefy the gullible public. Yes the gap between the state strategic needs and ideological ideation is facing the former with its inherent contradictions. The manifestation you can see in the morcha of the state i.e. FATA. Else their interests are deeply entrenched and cannot be washed away that easily. So don’t worry and take fingers out of mouth as it is not that surprising.

I have never seen such a stupid analysis ever by a Pakistani analyst. A worst opponent of JI would not agree with any proposal to limit or ban JI activities. Ejaz is known for his ISI links. Army and its lackeys are once again proving how irrational they are one they fight against its own people, be it former East Pakistan, Baluchistan or KP/FATA.