Home Scope The Tsunamis Are Coming

The Tsunamis Are Coming 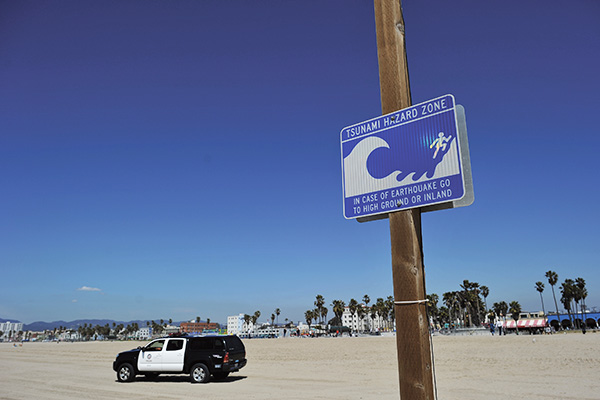 Are 20-foot waves about to hit the United States?

After a decade that saw two of the most devastating tsunamis in recent history—the Indian Ocean tsunami of 2004, which killed 230,000 people, and the 2011 tsunami that struck Japan, killing 20,000 ­people—seismologists are paying extra attention to the possibility that undersea earthquakes in less seismically active regions might trigger similar waves.

Which is why an earthquake that occurred on April 12 of last year, about 170 nautical miles east of Boston, caught the attention of John Ebel, a seismologist at Boston College. In fact, the state of Massachusetts is adding a chapter on tsunamis to the latest version of its hazard plan.

The April 12 quake, which registered a magnitude of 4, wasn’t particularly strong or unusual, but its precise location was intriguing, he says. Though “no one but for a few lobsters felt anything,” he says, the earthquake occurred along the edge of the continental shelf, a setting similar to the Grand Banks earthquake of 1929, a temblor measuring 7.2 in magnitude that was felt as far away as New York City. That quake created what is called a “submarine slide.” ­Forty-eight cubic miles of sediment from the continental shelf sheared off, and the tsunami created by this displacement claimed 29 lives in Newfoundland.

“I think the possibility that a similarly large earthquake could occur off the East Coast of the U.S. has to be considered,” says Canadian seismologist Allison Bent. But the question is whether such an earthquake would produce a tsunami. The majority of earthquakes in the region are “strike-slip,” meaning the movement is horizontal. These, she explains, generally don’t produce tsunamis. The probability of a submarine slide is low, but, she adds, “not zero.”

Even if such an event occurred, there would be no time for a meaningful warning, says George Pararas-Carayannis, president of the Tsunami Society International. “The tsunami travel time to the nearest coast would be on the order of about 15 to 20 minutes,” he says. “If the earthquake caused a submarine landslide near the East Coast, the travel time may be even less.”

“It’s like planning for any other low-probability natural disaster,” says Ebel, who is reviewing Massachusetts’s new tsunami protocols. “You need to have the plans in place even if there’s no prediction that it will happen anytime soon.”

Time Running Out for Survivors of Indonesia Disaster