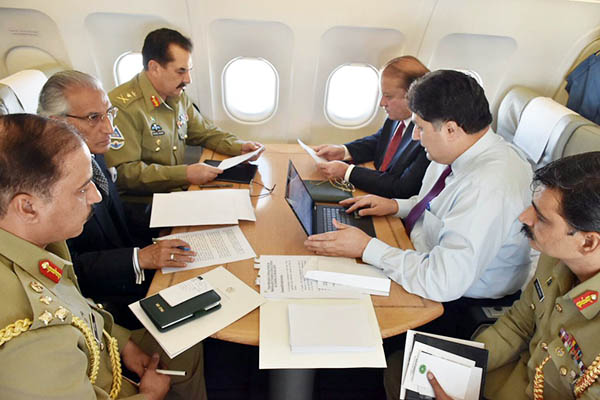 Islamabad must let Tehran and Riyadh know it is not acting on either’s behalf.

Prime Minister Nawaz Sharif left today for a two-day visit of Saudi Arabia and Iran. The trip comes in the wake of growing tensions between the two capitals. What are we looking at?

Let’s begin with some known facts. The Riyadh-Tehran rivalry is not new but has taken turns for the worse since the 2011 launch of the Arab Spring. Riyadh is convinced that Tehran wants to emerge as a regional power in the Middle East and intends to deprive Riyadh of its diplomatic heft in the region. This is not incorrect. Tehran, by all indications, is actively pursuing this course, relying—as is Riyadh—on non-state actors (Shia militant groups) and Shia populations in the Middle East to project power by using the denominational marker.

Riyadh too has long relied on its Wahhabi denomination to make inroads into the Sunni world. It has used its financial strength to influence policies, has funded extremist groups and created, like Iran, lobbies within other Muslim and Muslim-dominated states that think and act supra-state.

In both cases, denominational markers aside, the deadly game is essentially a function of real- and machtpolitik. However, the rivalry, expectedly, has widened the historical and denominational gulf between the Sunni and Shia worlds.

But Riyadh now faces another problem too: Wahhabi-Salafi non-state groups that threaten the House of Saud. This development began with Al Qaeda but now also includes the Islamic State. The Sauds have ruled the Kingdom of Saudi Arabia through a three-pronged strategy: Keep the Wahhabi clergy close to them in a way where Wahhabi denomination is linked to the House of Saud as the central focus; extract complete obedience from the population through a lavish framework of subsidies made possible because of oil wealth; have a compact with the United States whereby Washington underwrites Riyadh’s security and the latter, in return, ensures the stability of oil markets.

This has worked. Until now. The Wahhabi establishment provided the Sauds with religious authentication; the population, suppressed through a code that combines Wahhabist exegesis with Bedouin traditions, remained docile while enjoying free amenities, and the U.S. remained interested in the Sauds as an important pillar of its Middle East policy.

All three compacts have come under pressure and are becoming increasingly unsustainable. The stability of oil markets is not a pressing issue as it was previously. The price of oil has steadily gone down and new sources of energy have become more viable. This has meant shrinking coffers for the Sauds. Less money means budget deficits that will, sans punishing restructuring, become unviable (the deficit for current fiscal stands at 15 percent of the GDP). Economic restructuring, however, means cutting down on subsidies. But fiscal retrenchment that reduces the munificence threatens the Sauds’ absolute control of the population that could become more restive. The reserves have already dropped by $100 billion. The only relative plus is the debt to GDP ratio, which stands at 5 percent.

The religious authentication, as Custodians of Makkah and Medina, is being threatened by groups that are even more Wahhabi than the Sauds and reject the idea that the House of Saud is the focal point of Islam. Additionally, news of tensions within the House of Saud keep surfacing, the problem of succession being a central one. Already, emerging evidence suggests that King Salman’s son, Muhammad bin Salman, deputy crown prince and defense minister, exerts far more influence than Crown Prince Muhammad bin Nayef.

The jitters in Riyadh are, therefore, understandable. Things are not looking up internally and externally. The internal troubles are compounded by Iran’s power projection. Most analysts have pointed out, correctly, the useless Saudi war in Yemen. It adds to Riyadh’s financial woes. Despite the kitty going smaller, KSA is the 4th largest spender on defense at $80.8 billion, trailing behind only Russia, China and the U.S. Still, going by Tehran’s show of flag in Iraq, Syria, Lebanon, Palestine and now in Yemen—the Kingdom’s underbelly—the Sauds’ trepidation can be appreciated.

Iran, on the other hand, has gone from a position of weakness (U.S.-induced isolation) to a position of emerging strength. Its nuclear deal with P5+1 means most of the sanctions are gone, though some sectors remain under sanctions and additional sanctions have been imposed because of Tehran’s missile-related activities. That said, the world’s largest and most intricate web of sanctions is gone, and financial experts and economists already predict growth for Iran’s economy. One estimate says the lifting of energy sanctions could help Iran increase its revenue from oil exports by $10 billion. A BBC report quotes Iran’s central bank as saying that “lifting banking sanctions will allow $30 billion of foreign reserves currently frozen in accounts around the world to be brought back—the U.S. Treasury says the figure is $50 billion.”

The IMF estimates that Iran could “boost its GDP growth to around 5% in 2016-17, from almost zero currently.” Analysts also predict that lowering the cost of trading with Iran could save Tehran “some $15bn yearly in cheaper trade.”

The baseline of course is simple: while Riyadh’s economy is sliding and its influence waning, Tehran’s, with sanctions lifted, is looking up and it seems ready to integrate into world markets and trading activities. The two countries’ future projections look different. Riyadh is under pressure both from Iran and its Shia proxies, as well as Wahhabi groups that have sprung from the womb of Saudi Wahhabism but now threaten it by rejecting the House of Saud.

Into this situation Pakistan now finds itself. It has interests linked to both Riyadh and Tehran. Iran is also contiguous. Both capitals are locked in proxy combat that is getting nastier and shows no signs of abating.

The significant aspect of Sharif’s visit is that he is accompanied by General Raheel Sharif. The other important factor is that it is a visit to both capitals. Islamabad is clearly signaling to both states a very basic fact: it (Islamabad) does not want to be dragged into their conflict. Islamabad has its interests linked with both and it will have its relations defined with both independent of their combative rivalry. In other words, there’s no hyphenation here. The two capitals must not see Islamabad as acting on either’s behalf. There are Saudi needs that Pakistan can fulfill without being, in any way, part of any effort that can be construed as anti-Iran. Similarly, Islamabad’s relations with Tehran are independent of Riyadh.

This is—or should be—the broad outline. The minutiae will be determined by who needs what at what point. Different interests envisage different approaches and incentives. It’s a complex game and would require deft diplomacy.

The Shia Haider forget to mention the terrorism of Iran in Sunni majority countries include that of ethnic cleansing of Sunni’s in Syra with the help of Alawati dictator and Shia Hizb terror group and in Yemen through minority shia Houti groups against majority Sunni of Yemen. Iran is a terrorist country also helping India to establish its base in Afghanistan for anti-Pakistan activities and Iran supports Balouch insurgency against Pakistan. Pakistan should have no relation with fake Muslim country like Iran.

The Sunni Inspired haider forgot that US which promotes irreligiosity in the world like alcohol, pornography, Homosexuality is a close kin of House of Saud. When Israel kills Innocent Sunnis in Palestine Iran, despite being a shia, raises its voice but House of Saud does not. Its ironical that we call west as evil but all prince of House of Saud go there to study And anyways if salafi islam is pure then there was no Monarchy at the time of Salaf. House of Saud has also maintained good relations with India and King Abdullah was their Chief guest on Independence Day. Pakistan should have no relation with a fake muslims called House of Saud.