The U.N.’s Failure in Aleppo 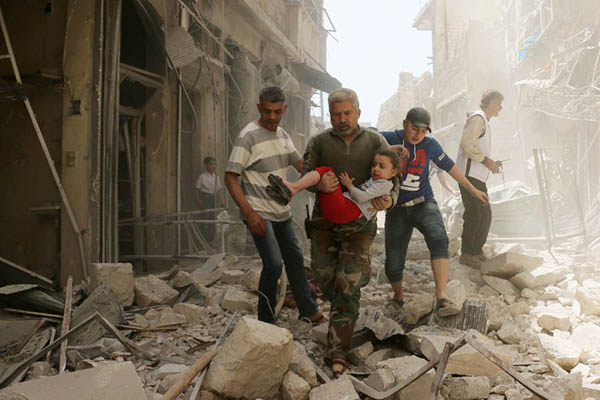 The warning from the U.N. envoy could not have been starker: Pounded by a near-daily barrage of airstrikes, Aleppo would be totally destroyed by Christmas unless the United Nations stopped the carnage. During the weeks that followed Staffan de Mistura’s distress call in early October, there was a global outcry as Syrian forces, backed by Russia, tightened their grip on the city, but little action at the United Nations.

Two Russian vetoes at the Security Council blocked attempts to halt the bombing and spare civilians as U.N. statements professing that there can be no military solution to the devastating five-year war rang hollow. With the fall of Aleppo, the world body founded on the post-World War II promise of “Never Again” is once again facing questions about its ability to confront conflicts.

“The fall of Aleppo is the single greatest crisis for the U.N. since the Iraq war,” says Richard Gowan, a U.N. expert at the European Council on Foreign Affairs. “It has created an enormous crisis of trust in the Security Council.”

Diplomats point the finger of blame at Russia, accused of providing diplomatic cover while its Syrian ally waged an all-out assault on Aleppo. But there are also recriminations against Western powers, U.N. Secretary-General Ban Ki-moon and the broader U.N. system that has been unable to bring humanitarian aid to one million Syrians under siege.

Alarmed by U.N. reports that Syrian militias had executed dozens of civilians in east Aleppo, France, Britain and the United States called for observers to be dispatched to monitor the situation on the ground. It took four days for the council to finally adopt a resolution on deploying U.N. observers and two days later, the teams had yet to set foot in the eastern districts of Aleppo.

Amnesty International lamented that “this important measure has come far too late,” and warned: “The world is watching how the U.N. responds to the plight of Aleppo.”

Ban, who steps down next week after 10 years as U.N. chief, has defended the world body’s handling of the Syria crisis even though the war escalated under this watch. In a recent interview with AFP, Ban said divisions among world powers, regional players and among Syrians themselves had created a “perfect storm” that allowed the war to rage on, killing more than 310,000 people.

“If there is any criticism, I am ready to accept this,” he said. “But sometimes, a situation just develops beyond my control, beyond the control of the United Nations.”

Ban has appointed three envoys to lead U.N. efforts to end the war, with De Mistura taking up the mission in July 2014 after former secretary-general Kofi Annan quit as did his predecessor, veteran diplomat Lakhdar Brahimi.

After nearly six years of conflict, there is no international investigation under way of war crimes in Syria after Russia, backed by China, used its veto in 2014 to block a request to the International Criminal Court. Contrary to other conflicts such as South Sudan and Yemen, no U.N. sanctions have been imposed on those deemed responsible for the bloodshed.

Next week, France and Britain are to present a draft resolution demanding sanctions for chemical weapons use in Syria, but Russia will undoubtedly again veto the measure. That would be the seventh Russian veto since the conflict began in 2011.

“The Syrian crisis has profoundly damaged the U.N.’s reputation across the Arab world,” said Gowan. “Many Sunni Arab governments view the Security Council as a Russian tool.”

Russia fiercely defends its support of Syrian President Bashar al-Assad. Ambassador Vitaly Churkin has remarked that were it not for Moscow’s military intervention, “the black flags” of the Islamic State group “would be flying over Damascus.”

Antonio Guterres, who will succeed Ban on Jan. 1, will inherit the U.N. failure in Syria. The former U.N. refugee chief and Portuguese prime minister has said it was high time to “stop the nonsense” in Syria, though he will have to contend with the new U.S. administration of president-elect Donald Trump.

For many diplomats, Aleppo joins Rwanda and Srebrenica on the list of U.N. failures, marking another low in the world body’s 71-year history. The “comparisons between Aleppo, Rwanda and Srebrenica tell you everything about the magnitude of the current catastrophe,” says Martin Edwards, professor of diplomacy at Seton Hall University. “There is nowhere to go but up.”