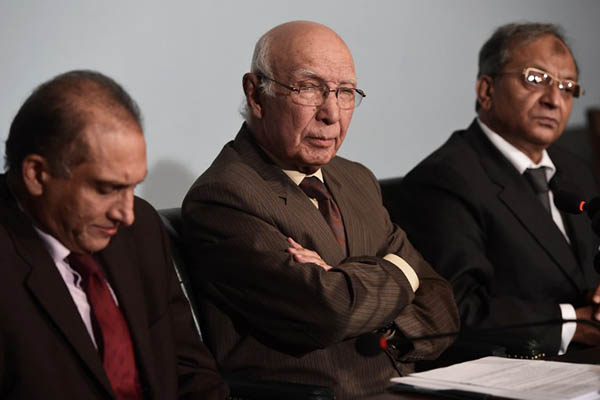 Nuclear strategy talks of two types of failure: failing-deadly and failing-impotent. The first relates to pressing the button too early, the second to the inability to press it at all, or too late.

The Pakistan-India Joint Statement after a 50-minute meeting between Prime Ministers Sharif and Modi on the sidelines of the Shanghai Cooperation Organization summit is where Pakistan failed impotent.

Seventy-two hours after that, back in Islamabad, Sartaj Aziz’s media briefing on the meeting in the Russian city of Ufa is about failing-deadly.

What are the takeaways from these two episodes, with Nawaz Sharif conceding too much unilaterally and then Aziz coming midfield to do damage-control?

There are two layers of analysis. One, of course, deals with Pakistan-India and how Narendra Modi is shaping policy toward Pakistan. That’s the level of analysis most do, and would, even in this case.

But there’s another one, at home, which is nary talked about, or at least not in any structured way.

This second level has to do with how the foreign policy formulation and implementation mechanism has been configured since Sharif took office in 2013.

Pakistan does not have a full-time foreign minister. It does not even have a full-time defense minister. (The less charitable will extend this even to the finance ministry, given a lot else that Ishaq Dar seems to be doing, and continues to.) The prime minister has kept the portfolio with himself. He has two sherpas, though, Sartaj Aziz and Tariq Fatemi. Aziz is adviser to Sharif on national security and foreign affairs, and Fatemi, a former foreign service officer, is special assistant to the P.M. on foreign affairs.

This is messy enough. Add to this the structural problems of civil-military relations and GHQ’s concerns on some of the fundamental determinants of foreign policy, woven with security concerns, and we have at least five shops dealing with the issues: PMO, MoFA-Aziz, MoFA-Fatemi, GHQ and GHQ-ISI. Stuck somewhere, someplace in the PMO is the national security division with a full-time secretary but with no real coordination with other players.

In June 2013, when Sharif configured the MoFA thus, I wrote: “These two technocrats [Aziz and Fatemi] are supposed to guide him through the bureaucratic maze and institutional inertia.

“The reality is slightly different. There was a fight for the turf between the two seasoned hands before matters were made clearer. It expressed itself somewhat comically during the recent visit of the German foreign minister when there was much confusion about which of the two will be the point person for the meetings with the German F.M. By all indications, we will see more tension.

“Similarly, combining the two positions of NSA and adviser on foreign affairs may be essential for elevating Mr. Aziz to the status of federal minister but it doesn’t work when it comes to doing work. As NSA, Mr. Aziz is supposed to be a P.M.’s Secretariat [now PMO] official. Will he operate from there? Which of the two positions he holds is senior? It is safe to assume that to be NSA. Mr. Fatemi, as special assistant to the P.M., is also a P.M.’s Secretariat official.

“At best, it will create confusion in the P.M.’s dealings with the Foreign Office (FO); at worst, it will help the bureaucrats stall things, resulting in precisely that which the P.M. ostensibly wants to avoid.”

This was two years ago. Things have actually been worse. Sharif has an effusive approach to foreign policy; Aziz is largely irrelevant; Fatemi works his old channels through MoFA but his bureaucratic conservatism continues to run into Sharif’s free-style approach, which means he (Fatemi), to retain his job, must let the P.M. do what strikes the P.M.’s fancy.

So, every time the P.M. pads up to go out batting, he thinks the other side is net-practicing. The dressing room, where the ‘boys’ sit, watches him with dismay. Corollary: he goes out on a limb and then, back home, retreats. Result: we end up with a dysfunctional foreign policy.

A good case study is the Yemen crisis. When the Saudis came knocking, Sharif decided he was going to fall in line sooner than one can say Mustansar Hussain Tarar. He was advised against it. It was not until the dressing room weighed in that he decided to start playing with any degree of sophistication. Funnily enough, it wasn’t the Foreign Office but the GHQ that saved the day, informing the P.M. that the Army simply could not send troops to Saudi Arabia.

In this entire cast of characters, Aziz, a suave, savvy technocrat-politician, is the most unused when it comes to decision-making and the most abused when it comes to damage-control. On Monday, July 13, he told the media that Pakistan talked about Kashmir and also the Samjhota Express killings. That might be so, but the Joint Statement had zero mention of Pakistan’s concerns. Aziz knows that it makes no difference what might have been talked about. The document that comes out—and in this case read jointly by the two foreign secretaries—is what counts.

In my TV show that evening, I raised this issue repeatedly and also said that this is likely to be Sharif’s Sharm el-Shaikh moment, referring to the concession by former Indian prime minister Dr. Manmohan Singh for which he was hauled over the coals by the political opposition in India. Aziz’s press briefing, to be charitable, is nothing more than controlling damage Sharif caused at Ufa. Period.

Lessons: one, Sharif has to change his style on foreign policy, appoint a full-time foreign minister and start taking advice on how to go about complexities. Two, he must realize that it is better to approach India, if he doesn’t want to front-load the talks with the K-word, on the issue of trade. It is disconcerting that Sharif scuttled much good work done by his brilliant commerce minister Khurram Dastgir-Khan who could have clinched a deal with the previous Congress government.

As non-military solutions go, Pakistan needs to launch a multilateral diplomatic offensive but also send out positive signals on trade. It’s all about presenting the right image as part of a game of relative gains rather than a zero-sum one. A diplomatic offensive sans talks on trade will be just a blunt weapon, more of the same, along old lines. But a combination of pressure with signaling a cooperative framework presupposes the ability to game things subtly, and play it with greater sophistication.

What we have right now is a joke in the name of foreign policy. And a bad one at that.

Ejaz sb, I feel Mian sb is getting way too much hell for this. He and Modi both played it safe. Used old statements to at least show that talks are on their way. This is still better than nothing to show.

With utmost respect, my dear friend EH talked of everything that is wrong with Sharif’s style but didnt write one word of explanation on why the Ufa meet/jt was “a blunder”.

very well articulated. The Ufa meeting was really blunder at least on part of Pakistan. India raised its prime issue of Mumbai attack and asked Pakistan to prosecute Lakhvi. But Pakistan side was unable to even raise the issue of Kashmir. Meeting for the sake of meeting will not resolve issues between India and Pakistan. Our government should understand that there is a need to pursue serious negotiations with India on all outstanding issues especially RAW’s nefarious activities in Balochistan and Sindh and its nexus with militant wing of MQM.