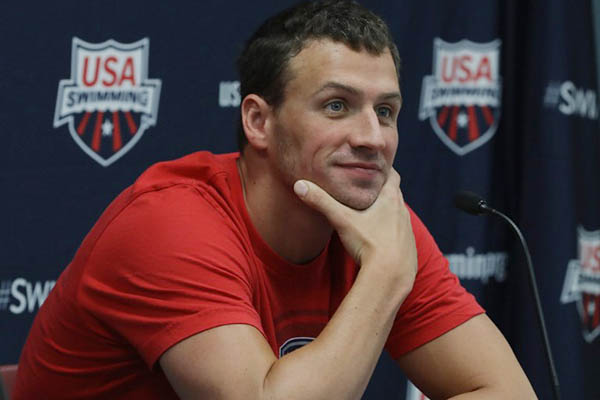 It is Ryan Lochte’s turn to be scorned as the world’s ugliest American: a man wrapped in shame for his concocted story of being robbed at gunpoint at the Rio Olympics.

America and the world have watched in disbelief as the flashy, 12-time Olympic medal winner’s shocking account—corroborated by three other U.S. swimmers in Rio and initially a howling embarrassment for the Brazilian hosts of the Games—gradually fell apart. Rather, it turns out they were detained at a gas station by a security guard after vandalizing a rest room and urinating on a wall in a state of inebriation while coming home from a party at dawn last weekend.

On Friday, the 32-year-old Lochte, who once tried to trademark his bro-speak catchphrase ‘Jeah!,’ meaning cool—apologized. He said he was sorry for “for not being more careful and candid” in his account of what happened.

But he seems to have all but self-destructed as a public figure. Surf the Internet and the comments are universally scathing.

There’s Lochte the national embarrassment, Lochte the real-life Pinocchio, Lochte the rich, handsome, dim-witted and attention-crazed jock who treated the world’s largest sporting event as a night out with the guys, and then left his drinking buddies holding the bag as he quickly left Brazil. Eventually, they ratted him out. “Ryan Lochte is everything the world hates about Americans,” reads a headline in the New York Post.

The paper’s definition of the ugly American abroad? “A sense of entitlement, however subtle; a feeling of superiority, however unintended.”

Washington Post columnist Sally Jenkins put it this way: “There is a special category of obnoxious American ‘bro’ that Lochte represents, in his T-shirt and jeans and expensive suede footwear, which he showed off on social media that night at the party along with the price tag. ‘We’re 6k deep here,’ he captioned it.”

Perhaps not since a Minnesota dentist and trophy hunter named Walter Palmer shot and killed a prized black-maned lion named Cecil in Zimbabwe last year has a single American wallowed in such global ignominy.

Palmer went underground for months and shut down his dental practice. He was loathed on social media. Eventually, he apologized too.

Everyday people are mercilessly laying into Lochte as he goes into damage control mode. It could be only a matter of time before companies with which he has endorsement deals start dumping him.

One tweet joked the reason the diving pool at Rio turned green is that Lochte urinated there as well. A newspaper cartoon showed Lochte being dragged to the bottom of a pool by a ball and chain, with the word ‘lies’ written on the ball.

Lochte and his three friends are also reviled as having insulted the intelligence of Brazilian police, exploiting Rio’s reputation for rampant street crime and violence and then acting stupefied by all the fuss they made. “That’s one problem with obliviously arrogant Americans. They just don’t get it,” the Miami Herald said. “In crafting their story as victims, Lochte and friends gave off the same air of entitled superiority as Donald Trump: The USA is No. 1 and your third-world banana republic is uncivilized compared to us,” it said.

Jenkins, of The Washington Post, said Lochte is toast and he deserves it. “Lochte’s done as a public figure, of course. Which is probably the most effective form of justice for someone who apparently so craves attention. Oblivion is what he deserves,” she wrote.