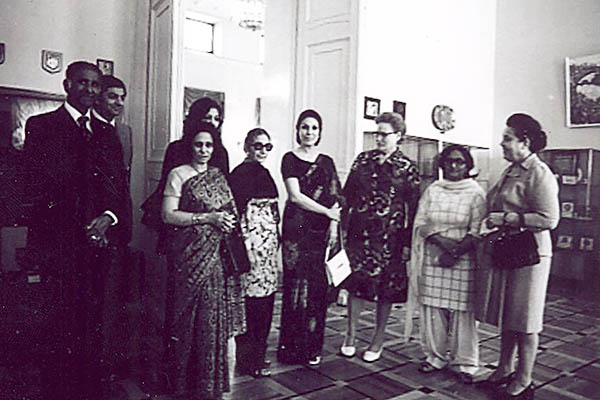 Tall and striking, composed and charming, it is no surprise that Nusrat Ispahani captured the imagination of Zulfikar Ali, rising star of Pakistan’s political firmament and scion of Sindh’s fabled Bhutto family. Soon enough, Pakistan was witness to Begum Bhutto’s indefinable yet undeniable star quality, which she shared with her famous daughter, the assassinated ex-prime minister Benazir.

The comparisons between Benazir and her niece Fatima Bhutto are superficial. Afghan-born author-activist Fatima is in fact the mirror image of a young Nusrat, her Iranian origin grandmother. Those who have seen Begum Bhutto in her heyday will agree.

It was in 1972 that I first met Begum Bhutto. The first lady of Pakistan accompanied by Murtaza Bhutto had come to West Germany, where my father was posted as Pakistan’s ambassador, to grace the otherwise disastrous Munich Olympics. There she was in the VIP enclosure attracting admiration effortlessly, with personalities like King Constantine of Greece coming over to greet her. I also remember that her graciousness continued despite the fiasco involving our hockey team, and that Murtaza was polite and courteous likewise.

By this time, Nusrat Bhutto was the graceful and glamorous consort of one of the most powerful politicians of the Muslim world. In photos with heads of state in world capitals such as Beijing, Moscow, London, and Washington, she appeared positively regal. As an onlooker observed in London during a State visit, “she makes an impact just by entering a room, be it filled with thousands.” But despite the treacherous trappings of fame and fortune, Begum Bhutto earned for herself a reputation for never throwing her weight around, a testament to her wisdom and goodness both.

A year later, Begum Bhutto and Benazir came to stay with us in Bonn. Since my mother was away, I was playing hostess. At one stage Begum Bhutto asked me for some washing powder. Recovering from my surprise, I assured her that their laundry would be done with ours! She didn’t complain about the dressing chair in the master guestroom being under repair either and would apply her makeup sitting on the floor, chatting cheerfully. Whether relaxing in the sunroom overlooking the Rhine or strolling along the cobbled streets near Beethoven’s house, I enjoyed their company thoroughly. Benazir and I became friends, and this bond was strengthened at Oxford and maintained thereafter.

Two years later, in 1975, Begum Bhutto came at the invitation of the Soviet Women’s Committee to Moscow, where my father was now ambassador. She broke the formality of the reception line at Sheremetyevo Airport with a stunning smile when she spotted me and conveyed Benazir’s greetings then and there. She was thoughtful and considerate throughout her visit, thanking her Russian hosts and my parents at every step. After a formal dinner at our official residence in her honor, Begum Bhutto was telling me of Benazir’s plans to contest elections “as soon as she’s 25,” when a sycophant interrupted our conversation to praise Benazir to the skies. She elegantly but decisively deflected this, saying, “Well, at the moment these two girls are just students together at Oxford.”

After Gen. Zia-ul-Haq ousted Zulfikar Ali Bhutto’s government in 1977, it was Begum Bhutto who filed a case against his arrest in the Supreme Court. The petition was admitted by the then Chief Justice Yaqub Ali, my uncle, whom Zia immediately removed from the bench for doing so. During the brutal years that followed, Begum Bhutto held the Pakistan People’s Party and the Movement for the Restoration of Democracy together. As chairperson of the MRD, she led the country’s disparate and often disruptive political forces as ably as any seasoned politician could have, with dignity and devotion. She led rallies defiantly, spoke up fearlessly, and suffered bravely. In so doing, Begum Bhutto ensured her place in our hearts, and in history, as one of Pakistan’s most admired women.

Hyder is a historian.