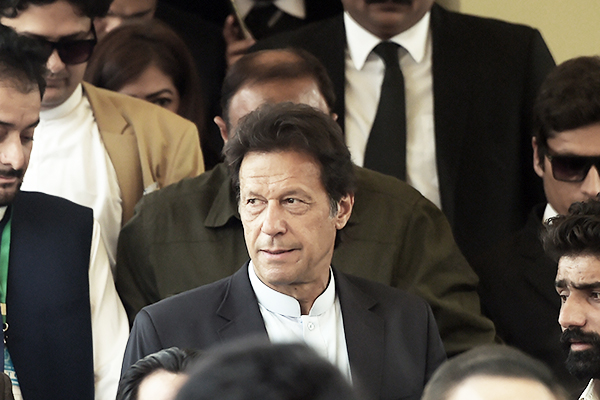 Pakistani politics owes a debt to the PTI chief

It is fascinating to see a politician in the making. The generation of journalists that started out in the dying days of Gen. Zia-ul-Haq’s vile and oppressive rule, despite the darkness shrouding their prospects in the dismal 1980s, has turned out to be an exceptionally lucky one. They are now what the Pakistani media loves to call “senior journalists,” a crop fortunate enough to see the making of not one but three politicians who have all left indelible marks on the country’s political history over the past 30 years or so. The latest among them, after Benazir Bhutto and Nawaz Sharif, is none other than our much loved World Cup-winning captain, Imran Khan.

He is also by far the most intriguing of the three.

When Bhutto returned to Pakistan in April 1986, her distance from her new reality was forcefully reflected in her battle with Urdu during her first address to what was arguably the largest ever political gathering in the country’s history. She called herself a rebel but immediately set her party on a collaborator’s path, her politics of pragmatism portraying her not as a carrier of her slain father’s ideology but as a miffed princess focused single-mindedly on reclaiming a debt she felt the nation owed her.

Failing to find empathy with a society reeling under the devastating burden of a proxy war and a dictator’s cynical manipulation of religion, she tried to take charge of the state and ended up sparring shadows instead of undertaking the complex microsurgery required to exorcise the many political, philosophical and legal devils genetically infused into the nation’s psyche by General Zia’s evil genius.

Propelled to a mirage of power following General Zia’s assassination, she kept losing her way, forever ensnared in an unwinnable battle of melding her politics around the state’s needs. By the time she was assassinated, following another failed attempt at governance and several more years of exile, she had done a full 180-degree in her politics, from a firebrand rebel to a state asset without realizing that something growing deeper inside the state was not prepared to live even with her new avatar.

Does it sound like a predictable trajectory for all popular politicians in a multilayered state? Yes; and the converse is also true, as anyone who has followed Sharif’s political evolution will agree. Raised as a bulwark against Bhutto, he was aggressively spoon-fed his politics by a gushing state apparatus that saw in him the only guarantee of keeping General Zia’s model of an overbearing state intact. But as always happens to the trite blueprint followed by Pakistan’s state agencies, it took on a life of its own with a deposed but triumphant Sharif telling a small group of journalists in his Model Town residence after losing office that he will return to power without ever riding the shoulders of another general.

From Army chief Gen. Jehangir Karamat’s premature removal from office in October 1998 to Gen. Pervez Musharraf’s military coup almost exactly one year later, Sharif reinvented his politics along populist lines, using General Karamat’s resignation as an example of how determined he was to assert his political will, an ambition thwarted by a coup aimed at preempting his intentions to hold General Musharraf accountable for his disastrous outing in Kargil.

Many believed that accepting General Musharraf’s offer of exile over treason charges had put an end to Sharif’s politics for good. However, Bhutto’s assassination followed by five years of Asif Ali Zardari’s misrule gave Sharif the chance of completing his own 180 degrees in politics—moving from a state-nurtured politician to a populist stubbornly holding his own against Pakistan’s security establishment in a relationship best described by the farcical furor over what has come to be known as “Dawn Leaks.”

Whatever the direction of their politics, from rebel to accomplice or vice versa, the politics of Bhutto and Sharif remained enmeshed with that of the state. Like a pendulum, they swung from one end to the other but only as part of the same machine.

Khan, in contrast, is evolving along an entirely different path. In the last 21 years since Tehrik-e-Insaf hurtled onto the electoral field, there has been no pivot connecting Khan to the state and regulating his swing. Not only that, his politics has entirely lacked the pragmatism of Bhutto or the arrogance of Sharif, remaining centered on the single-point agenda of power’s endemic corruption.

In 1997, his sole political slogan was against Sharif and Bhutto’s alleged corruption—“Bibi chor aur Babu chor.” Yet his entire political party bagged fewer votes than the Sharif brothers alone. Making mistakes, issuing ridiculous statements and choosing astonishingly ill-advised allies, he kept his guns trained on corruption, not wavering even when his party seemed to have knocked itself off the shelf after boycotting the 2008 elections. Just as he had kept pounding away at his most feared opponents on the field with his 90 miles per hour off-spinners at the peak of his cricketing career, Khan kept his focus on corruption even as everyone around him was advising him to adopt a more sellable slogan, arguing that for most politically aware Pakistanis, corruption was no more than a tool in the hands of an ambitious and self-serving military junta to browbeat politicians and stall the democratic process.

History must have significant respect for steadfastness as it seemed to be, however imperceptibly, bending to the tenacious captain’s will. The U.S. Navy Seals who took out Osama bin Laden in Abbottabad also took with them a fair amount of the Army’s credibility as a viable alternative to politics—a myth it had successfully perpetrated for a quarter of a century despite its repeated failures in governance. With the scrapping of the 8th constitutional amendment and Pakistan Peoples Party’s phenomenally dismal governance, came the 2013 elections and Khan found himself in business like never before, emerging as the second largest party in the country with its own government in Khyber-Pakhtunkhwa.

Many believed that it would shift Khan’s focus from corruption to governance issues in Khyber-Pakhtunkhwa but with an obstinacy that was now becoming a brand for his politics, he categorically rejected warnings from all other parties against destabilizing democracy through his sit-ins and perpetually aggressive posture and kept hammering away at the Sharifs till his politics won formal recognition by the state in the shape of a godsend called “Panama Leaks.”

Irrespective of the many interpretations of the Panama verdict, spawning its own set of humor and vitriol, a new political reality dawned with the advent of the Panama case. For the first time in Pakistan’s history, a sitting prime minister’s family was probed for corruption and a verdict delivered during his tenure, a verdict as indicting in its nuance as it is ambiguous in substance. In 21 years, 17 of which were spent in political anonymity bordering on ridicule, Khan has finally brought corruption on the map of Pakistan’s electoral agenda as Panama now seems to be the new pivot around which will swing our political fortunes from here till at least 2018 if not beyond.

However numerous or deep the layers of ambiguity being laid around the verdict, there is no fog surrounding the march of Pakistani politics to a historic milestone, a march that may not have been possible but for Khan’s untiring play at the bagpipes of corruption. It does not matter if there seems to be no agreement over who won in the court for outside in the political battlefield, Khan is now standing tall and all by himself with his first real trophy in politics.

Khan is Director News at Aaj TV and has served in several senior editing positions.

All praise for Imran, as a Khan – leader, even to PTI-KP in controlling and preventing their corrupt tendencies though their Ehtesab fiasco cut him deeply and shall hurt PTI in the 2018 elections – and all because of the corrupt spawn of Bureaucracy.

Your analysis with bite is suspect for not including the perpetual Bureaucracy in it’s leading role in the rampant Corruption.

Secondly, it’s suspect for acumen by not highlighting the Globalist forces overtaking and controlling our Economy or do the masters speak ?

What’s more corrupt; a self-professed fundraiser for the Dar ul-Uloom Haqqania, wife grabber, sycophant for lynching minorities or these small time punks in the corrupt bureaucracy?

If Pakistanis could choose between Hitler and Saddam, they would choose Hitler because he was more a man of the people than Saddam ever was. See how messed up that is?

@dyingtissue.. what actually do you want to say ?