The Voice of Silent Protest 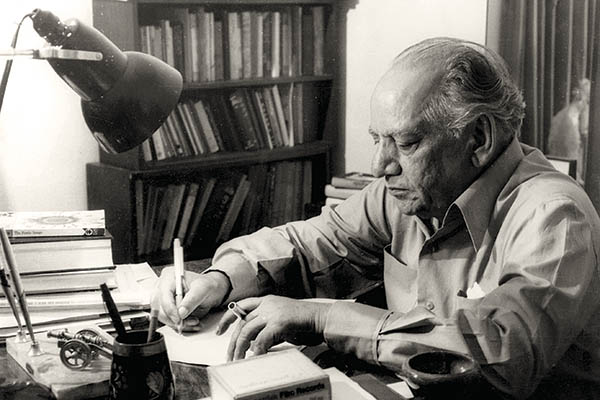 One of Urdu’s greatest poets and his abiding relevance.

As with Iqbal, Faiz’s poetry was embraced—and rejected—during his own lifetime. His works, memorized and recited by citizens of Pakistan and India alike, were in the classical tradition, which seems to have paused after him. Faiz harked back to Ghalib with his love poems. One can imagine Ghalib reading Faiz and marveling over such metaphors as dard aayay ga dabbay paoon liye surkh chiragh (and pain will come tiptoe carrying its crimson lamp) from his early Naqsh-e-Faryaadi days. Ghalib would have loved the colloquial touch of that wonderful tautology, koi nahin, koi nahin aayay ga (no one but no one will come here), because he himself had begun intruding common speech into the ghazal.

Faiz also linked to Iqbal as the transmitter of a new message. But while Iqbal prescribed power as a means to overcome subjugation, Faiz resisted injustice through a capacity to bear pain. His pathos sprang from his “feminine” acceptance of pain as a way of overcoming the foe, his passive opposition to tyranny and exploitation. His greatness lay in his shunning of dominance as a panacea for the resolution of the human predicament. Critically, he was free of the straitjacket of any ideology. His political affiliations never surfaced in his poetry, except that he voiced the aspirations of the common man, the downtrodden, and the exploited. When he first rejected autocracy and dictatorship, many flagged him politically as the “Poet of the Left.” Today, his ideological adversaries find solace in his verse.

The fame he found overshadowed that of his great father, Sultan Muhammad Khan, who went from being a shepherd in Narowal to the polyglot chief secretary of Abdur Rahman Khan, Emir of Afghanistan. Faiz’s father had hid behind the curtains to catch the conversations with British-Indian officers negotiating the Durand Line of 1896. He later became Afghanistan’s ambassador to England, and authored the two-volume English-language biography of the emir that became required reading in studies of the Pakistan-Afghanistan border dispute.

Faiz studied classical Persian poetry in his father’s library in Sialkot while still in his teens and started writing ghazals around the same time. He got into Government College, Lahore—on the recommendation of Iqbal, who had known his father in London. Faiz did his master’s degree there in English, and another M.A. in Arabic at the Oriental College, Lahore. In 1935, Faiz moved to Amritsar to teach English at M.A.O. College. Here, he came under the influence of Prof. M. D. Taseer, became a founding member of the Progressive Writers Movement, and ended up marrying the poet-professor’s Englishwoman sister-in-law, Alys. The nikah was solemnized in Srinagar by Kashmiri leader Sheikh Abdullah.

Naqsh-e-Faryaadi, his first collection of poems, came out in 1941, when he was teaching at Hailey College, Lahore. He edited the literary journal Adab-e-Lateef until 1942, when his friend Majeed Malik took him to the British Army’s public-relations department in Delhi. Faiz rose to the rank of colonel, and was awarded the M.B.E. by the British Army in 1943. In February 1947, he joined Lahore’s Progressive Papers as chief editor of the dailies Pakistan Times and Imroze under the leadership of Mian Iftikharuddin while participating in the city’s labor politics. He became part of Lahore’s intellectual elite: Sufi Ghulam Mustafa Tabassum, Patras Bokhari, Taseer, Syed Imtiaz Ali Taj, Hafeez Jalundhari, Maulana Chiragh Hasan Hasrat—and Saadat Hasan Manto, his former pupil at Amritsar whom he defended against criticism from the Progressive Writers. In 1951, Faiz was arrested along with Communist leader Sajjad Zaheer for conspiring to overthrow Prime Minister Liaquat Ali Khan’s government. He remained in jail until 1955 and wrote there some of his best poems. He was also imprisoned in 1958 under Pakistan’s first martial law.

Lahore shaped Faiz’s politics. He was never a member of the Communist Party, and he kept away from the Progressive Writers’ more extremist factions. His politics were leftist, but he learned to coexist with the gifted rightist intellectuals of Lahore like Adabi Dunya editor Maulana Salahuddin and journalists like Majeed Salik, Hameed Nizami, and Meem Sheen. His famous critical poem Subh-e-Azadi (Dawn of Freedom) about Partition was attacked by Lahore’s rightists as a Communist reaction to Pakistan and by India’s Communists as rightwing repudiation of freedom from Colonialism.

In 1962, Faiz was honored with the Lenin Peace Prize in Moscow. He soon moved to London for health reasons, returning to Pakistan two years later as principal of Haroon College, Karachi. He remained in that position until 1972, when then-ruler Zulfikar Ali Bhutto appointed him as his adviser on culture. Chastened by his experience with the bureaucracy, Faiz turned to his international concerns on the basis of his friendships with luminaries like Turkey’s Nazim Hikmet and Nobel laureate Pablo Neruda. After the overthrow of the Bhutto government, Faiz moved to Beirut and lived there until 1982, through Lebanon’s civil war, editing Lotus, the journal of the Afro-Asian Writers Association.

The man’s verse was lyrical, above politics, and thus eternal. His collections Naqsh-e-Faryaadi, Dast-e-Saba, Zindan Nama, Dast-e-Tah-e-Sang, Sar-e-Wadi-e-Seena, Sham-e-Sheheryaran, Meray Dil Meray Musafir became part of the national psyche and the vehicle of collective emotion. Lahore became his city. It was here that Faiz discovered the Punjabi classics while mediating with the government for the release of his poet friend, Ustad Daman, the city’s true voice. Toward the end of his life, Faiz wrote poems in Punjabi, their diction testifying to his immersion in the classics. His message was new as he expressed the aspirations and grief of the Punjabi masses living under Gen. Zia-ul-Haq’s dictatorship.

Today, it is Faiz’s voice that continues to give expression to silent protest. That is why General Zia had felt the need to arrest Faiz devotees commemorating his birthdays after the poet’s passing. His widow, Alys, most famous of the Englishwomen who made Lahore their home, until her death, and his daughters, Salima and Muneeza, continue to represent the innately humanist culture of Lahore in the light of his genius.

Khaled Saheb,Very nice observation about two ways of resisting injustice, through power and through bearing pain. Active and Passive. Both require tremendous courage. May be the second requires higher courage but it is little understood. But to the people of sub-continent, the second comes naturally because of devotion deeply embedded in them and was thus utilised by Mahatma Gandhi in his Satyagraha and civil disobedience movements.
Your articles are very apt and shorn of any ideological leanings. Just stating the facts and expressing deep concern for humanity. How difficult it is for one to be free of any ideology. But that is the need of the hour. Our thanks and good wishes to you.