Home Opinion The War in Egypt Comes to Washington

The War in Egypt Comes to Washington 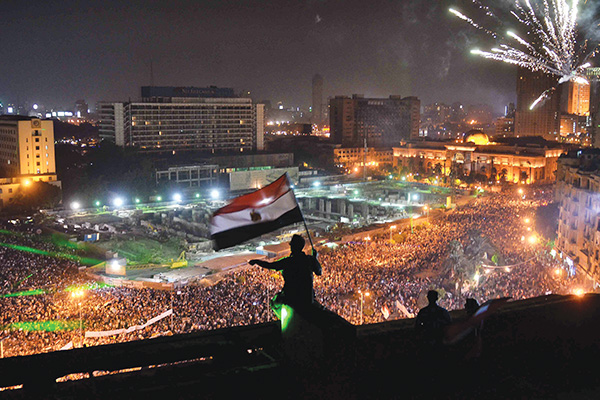 The left-right ideological battle is back with all-or-nothing dogmas.

[dropcap]A[/dropcap] year ago, Egyptians elected Mohamed Morsi of the Islamist Muslim Brotherhood to be their president. On July 3, after mass anti-Morsi protests, the Egyptian Army deposed him and began shooting his supporters in the streets. In response, two rival cliques of Washington commentators have championed broad, all-encompassing, and mutually contradictory principles to guide the Obama administration’s response. Either one, if applied with unswerving conviction, would likely produce disaster.

It’s a good moment to recall the advice George Kennan gave American foreign-policy makers in 1954: “Be gardeners and not mechanics.” Wise foreign policy requires mucking around in a country’s soil, feeling around for what is rising up from the ground. The world is too messy to conform to abstract principles and rigid rules.

The first principle being articulated in Beltway circles is that the United States should never tolerate coups. “There is no ambiguity about what happened in Egypt on Wednesday,” editorialized The Washington Post after Gen. Abdel Fattah al-Sisi, the head of the military, announced Morsi’s overthrow, “a military coup against a democratically elected government.” But there was a fair bit of ambiguity: the coup was prompted by the largest popular uprisings in Egypt’s history, and during his announcement Sisi surrounded himself with the country’s top Muslim and Christian clerics and key secular and Islamist political leaders, thus displaying the political inclusivity that Morsi and his Muslim Brotherhood had spurned.

Still, the Post was right. The answer to Morsi’s perversion of Egyptian democracy should have been more democracy. Instead of calling for a military takeover, the protesters should have focused on checking the Muslim Brotherhood via legislative elections due this year or next. And while some Egyptian liberals worried that Morsi’s manipulation of state power was making electoral remedies impossible, a military takeover is no remedy at all. First, because having been licensed to seize power, there is little reason to believe the military will easily give it up. Second, because the many Egyptians who still support the Muslim Brotherhood will now likely feel that if they want power, they too will have it to take it by force.

But it is one thing to oppose Egypt’s coup. It’s quite another to say that because as a matter of principle America opposes coups, it must always react the same way. “There should be no question that under a law passed by Congress,” explained the Post, “U.S. aid to Egypt—including the $1.3 billion annual grant to the military—must be suspended.” It should be restored, the Post explains, “only if a genuinely democratic transition is pursued in the coming months. That means tolerance for all peaceful political forces, including the Muslim Brotherhood—whose leaders, including Mr. Morsi, should be immediately released. It means acceptance of free assembly and free media, including the Islamist broadcasters that have been shut down. Any changes to the Constitution should be the result of a consensus among all political forces, without diktats by the military. And there must be a firm—and short—timetable for new parliamentary and presidential elections.” The Obama administration must “insist.”

Insist! Why didn’t Obama think of that? And what if Egypt’s new rulers refuse? International relations can be inconvenient that way. In 1979, the Carter administration stopped aiding another Muslim frenemy, Pakistan, because Congress had passed a law requiring the U.S. to withhold assistance from countries building nuclear weapons. Pakistan continued building, and in the 1980s, when America needed Islamabad’s help to resist the Soviet invasion of Afghanistan, it restored aid. Then, in 1991, after the Soviets withdrew, American policymakers remembered Pakistan’s nuclear transgressions and cut off aid again. Pakistan went right on building until 1998, when it tested a nuclear bomb. Then, three years later, 9/11 hit, America needed Pakistan again and began sending more aid.

Pakistan, like Egypt, is a country where spurning American ultimatums boosts a politician’s approval ratings. A Gallup poll last year found that Egyptians were twice as likely to oppose closer relations with the United States as to support them. Last July, when Hillary Clinton went to reopen the U.S. consulate in Alexandria, demonstrators pelted her motorcade with tomatoes and shoes. And if the U.S. did suspend aid, Egypt could probably find other suitors. When Morsi took his first trip outside the Middle East last year, he journeyed not to America but to China, whose trade with Egypt now exceeds America’s. The Saudis, who love the idea of a return to military rule, have reportedly promised to replace any cash the U.S. withholds.

Pakistan, like Egypt, is a country where spurning American ultimatums boosts a politician’s approval ratings.

Besides, America’s aid to Egypt isn’t philanthropy. It buys the U.S. military priority access to the strategically important Suez Canal. It buys U.S. access to Egyptian airspace. And it preserves Egypt’s peace treaty with Israel. To understand how important that is, remember that Egypt was crucial to ending last fall’s war between Israel and Hamas.

It’s not as if the Post and Sen. John McCain, who has also called for suspending aid, are isolationists happy to jeopardize America’s imperial reach in order to avoid collusion with undemocratic regimes. To the contrary, they are hawks who demand that America maintain, if not extend, its Middle Eastern hegemony. And yet they never publicly contemplate the possibility that, in a region where American power is going down, not up, there might be a tradeoff between preserving that hegemony and remaining morally pure. It would be one thing if McCain and the Post’s editors specified which tangible U.S. interests they would imperil so the U.S. can stand, consistently, against coups. Instead, in their fealty to an abstract principle, they pretend it can be easily harmonized with the messy, unsatisfying world that actually exists.

It would be hard to find a better example of the sweeping, decontextualized, 10,000-foot analysis that drove Kennan to distraction. Brooks wants America to oppose “Islamist” rule, but he never bothers to define the term except in a circular way. (Islamists are people who “lack the mental equipment to govern.”) In truth, if Islamism connotes a desire to base one’s political views on Islam, it comes in different, and sometimes mutually hostile, varieties. In Egypt, as Harvard Law School’s Noah Feldman has pointed out, Morsi did not compromise with liberals who feared Egypt’s new Constitution was too theocratic. In Tunisia, by contrast, another Islamist leader, Rachid Ghannouchi, agreed with secularists that the new Constitution should make no mention of Shariah. Iran’s supreme leader, Ayatollah Ali Khamenei, is an Islamist—but so is Mohammad Khatami, the reformist ex-Iranian president who argued that political sovereignty should rest with the people, not God’s self-appointed emissaries on earth.

If Islamists aren’t as monolithic as Brooks suggests, neither are they as distinct from the more secular leaders with whom they compete for power. Turkey’s Islamist leader, Recep Tayyip Erdogan, is clearly authoritarian. But to suggest that authoritarianism is something Islamists foisted on Turkey’s political scene requires ignoring the even more illiberal policies of the secular, military-dominated governments that preceded him. In the Gaza Strip, Hamas is deeply repressive. But the secular, pro-Western Mahmoud Abbas doesn’t tolerate criticism well either. (Nor does the Israeli government, when it comes to Palestinian protest in the West Bank.) And if Morsi’s authoritarianism shows that Islamists “lack the mental equipment to govern,” many of his Egyptian critics would say the same about the secular Hosni Mubarak, the man they claim Morsi began to resemble. As one academic expert on Egypt puts it, “Morsi is ruling through Mubarak’s state, and adjusting it to size.”

Brooks uses “Islamist” the way many hawks used “communist” and “socialist” during the Cold War: as shorthand to determine who is on America’s side and who isn’t without needing to know much about the particulars of the country in question. It was exactly that mechanistic thinking that convinced American policymakers that if Hanoi defeated Saigon, Vietnam would become an agent of Moscow and Beijing—despite the fact that communist or not, the Vietnamese loathed Chinese domination, and that by the 1960s China and the U.S.S.R. were on the brink of war.

Kennan, by contrast, believed that terms like “communism” and “socialism” were often vessels into which national regimes and movements poured their own particular interests and traditions. He favored the Marshall Plan, which over conservative objections funneled money to European socialists—who often turned out to be the most effective opponents of Soviet power. And he pushed successfully for the Truman administration to send economic, and then military, aid to Yugoslavia’s Marshal Tito, an avowed communist who was resisting Soviet domination of Eastern Europe. America, Kennan argued, should “not necessarily always [be] against the expansion of communism, and certainly not always against it to the same degree in every area. It all depends on the circumstances.” That’s what he meant by gardening. And it’s the right way for American policymakers to think about “Islamism” too.

So what should America do in Egypt? First—and this was an obsession of Cold War realists like Kennan, Walter Lippmann, and Reinhold Niebuhr—the U.S. should admit that it is a competitor in world affairs, not the umpire. That means acknowledging, contra George W. Bush, that its interests and ideals do not entirely align. In a country as anti-Zionist, and even anti-Semitic, as Egypt, the more democratic foreign policy becomes, the less well Egypt’s peace treaty with Israel will fare. The U.S. must husband its limited political capital to ensure that Israeli-Egyptian peace endures. When it comes to Egyptian domestic affairs, America should support the most inclusive, competent, and tolerant government possible, recognizing that for the foreseeable future, Egypt’s political transition will probably look more like post-Cold War Russia than post-Cold War Poland. To that end, the U.S. should advise, cajole, even publicly rebuke. But absent something truly horrifying like ethnic cleansing or genocide, it shouldn’t issue ultimatums—certainly not unilateral ones—unless it is prepared to rupture relations with a government that it needs as much as that government needs it.

And one more thing: the U.S. should work on its own democratic example, as it’s probably the most important thing it can offer the brave, long-suffering Egyptians who keep crowding the streets in pursuit of decent government. “The United States is becoming a broken society. The public has contempt for the political class,” wrote none other than Brooks a few years back. If America is not careful, people might start suggesting that its political elites “lack the mental equipment to govern,” too.