The War of Perception 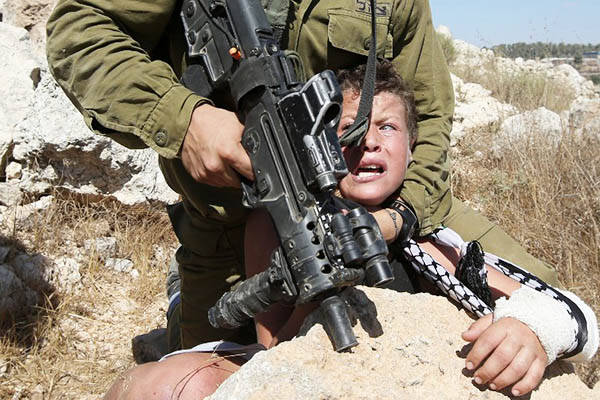 A soldier pins a boy down and is assaulted by his family: The scene might have gone unnoticed if not for footage that has turned it into another weapon in the Israel-Palestinian war of perception.

Palestinians see it as proof of Israel’s abuses in the occupied West Bank, while many Israelis say the soldier fell into a media trap laid by activists. The incident played out on Friday in the Palestinian village of Nabi Saleh and footage of it has since gone viral, generating a bitter debate both online and off.

As is often the case when it comes to the conflict between Israelis and Palestinians, there has been little room for middle ground. The video and pictures, including those taken by AFP, show a masked Israeli soldier trying to arrest an 11-year-old boy who has a cast on his left arm.

According to the Israeli military, the boy was suspected of having thrown stones during a protest. As the soldier holds him against a rock, his automatic rifle at his side, members of the boy’s family, including his mother and sister, along with other activists rush over and try to pull him off the child.

A wrestling match ensues, with the soldier’s ski mask pulled off and the boy’s sister biting the soldier on the hand. The soldier yells for help, and eventually a superior officer arrives and orders him to let the boy go. While walking away, visibly frustrated, the soldier throws down a stun grenade.

The images quickly made the rounds.

Palestinian papers reproduced a cartoon showing the soldier with a dog’s head, while some in Israel saw the decision not to arrest the boy as a sign of weakness.

Left-leaning Israeli newspaper Haaretz, referring to the headlock the soldier had put the boy in, lamented the situation in which the military has found itself in the West Bank. “It’s a national headlock in which an entire army, and behind it a nation, remains in a state of denial that there are military solutions to the conflict,” it said.

Nabi Saleh, near Ramallah, has for years been a flashpoint in the Israeli-Palestinian conflict. Each Friday, Palestinians, foreigners and even Israelis protest against the expansion of the nearby Halamish settlement. Stones are typically thrown by the protesters, while tear gas and rubber bullets are fired by the security forces.

In the past three years, two people have died and 375 been injured, with nearly half of them minors, according to protesters.

According to his father, the child in the video, Mohammed Tamimi, broke his wrist while fleeing an Israeli tank in his village, which was why he was wearing a cast.

“I wasn’t afraid,” the boy told AFP, “but I cried to call my family to come get me away from the soldier.” His mother Nariman said she thought “only one thing: free my son from the soldier’s hands.”

The Tamimi family has been at the forefront of the protests in Nabi Saleh. The father, Bassem, said he has been arrested nine times.

Ahed, the boy’s teenage sister wearing a Tweety Bird shirt in the video, is known to some for older photos showing her raising her fist at Israeli soldiers. It resulted in her being received by then Turkish prime minister Recep Tayyip Erdogan in 2012.

Some Israelis have accused the family of being agitators who put their children in danger. An Israeli officer familiar with the situation called Friday’s protest a “PR stunt” where demonstrators “try to provoke soldiers by hurling stones at them that can be deadly,” forcing them to react.

Arnon, the soldier’s father, told Israeli journalists that he regretted that his son’s restraint was not being given more praise.

The Haaretz analysis however sought to put the episode into context. “No amount of PR and media management will make the occupation of another nation look good,” it said.