Home Lightbox The War on Jang

The War on Jang 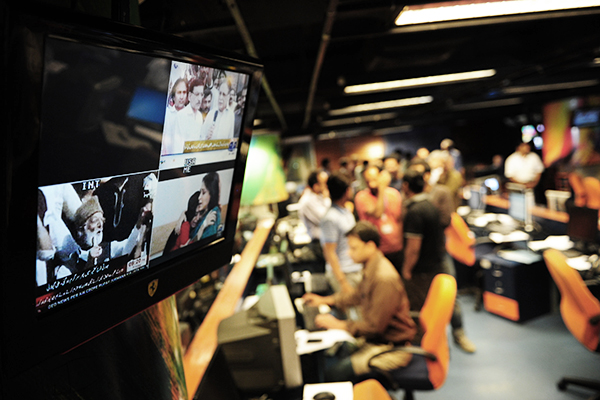 There’s no winner from what’s being done to the Jang Group.

An antiterrorism court in Gilgit-Baltistan has sentenced Mir Shakil-ur-Rahman, the man behind Pakistan’s largest media enterprise, and three others to 26 years imprisonment, fined them each Rs. 1.3 million, and ordered the seizure of their properties and passports.

“The malicious acts of the proclaimed offenders ignited the sentiments of all the Muslims of the country and hurt [their] feelings, which cannot be taken lightly and there is need to strictly curb such tendency,” reads the Nov. 25 verdict, which was issued by an antiterrorism court on the complaint of the deputy chief of Ahl-e-Sunnat Wal Jamaat, the Sunni supremacist militant organization, alleging that Rahman and three others committed “blasphemy.”

Given Gilgit-Baltistan’s constitutional status, this brazen overreach of a verdict is unlikely to be implemented in Pakistan proper. But it has turned up the heat on the besieged Jang Group—the “blasphemy” convictions bring with them the very real threat of vigilante action—and opened the court, and possibly the Army, to ridicule and worse.

In another country, the charges would have been laughed out of the court. Here, the proceedings were conducted ex parte, i.e., the defendants were not represented by their own counsel in court. Even worse, Jang’s English-language daily The News points out that the complainant is himself facing murder and terrorism charges. For terror-hit Pakistan, where blasphemy laws are abused and misapplied for political and personal agenda and where antiterrorism courts are notoriously supine, these convictions set a deeply troubling precedent.

What brought this on? At issue, apparently, is the May 14 broadcast of the now-defunct morning show Utho, Jago Pakistan hosted by Shaista Lodhi celebrating the marriage of actress Veena Malik and Asad Khattak. Rival broadcasters pounced on that show as “blasphemous,” prompting the media regulator to suspend Geo Entertainment for a month, fine it Rs. 10 million, and ban Lodhi for life from television.

It didn’t end there. Within days of the original broadcast, Jang, despite its multiplatform apologies, was facing whack-a-mole blasphemy cases, including the one in Gilgit-Baltistan. It still has 75 other cases it hopes to have consolidated and heard at the four provincial high courts. Of course, none of this would have happened had it not been for one of Pakistani journalism’s most shocking events almost a month earlier.

On April 19, Hamid Mir, Geo News’s primetime anchor, was shot in Karachi. Geo News ran with his brother’s allegation that the attempted murder had been masterminded by Lt. Gen. Zaheer-ul-Islam, the-then chief of the Inter-Services Intelligence agency. Furor ensued. Transmission companies forced Jang’s five channels off air or relegated them to cable backwaters, advertisers welched on their deals, and hawkers stopped selling the group’s dailies Jang and The News. Even the ruling party eventually distanced itself from Jang, with embattled defense minister Khawaja Asif claiming he had proof the media group was “anti-state.”

Seven months after the Karachi attack, Mir is back on air but Jang’s channels are still being shuffled around. Rival media houses have draped themselves in the flag and miss no opportunity to hit out at “traitorous” Jang, even with blatantly false allegations, setting the stage for a media-will-eat-itself dystopia. And Imran Khan, chief of the Pakistan Tehreek-e-Insaf, continues to insist Jang is operating on the instructions of foreign interests, including India and the U.S., even though Jang has conclusively debunked these allegations. Accusations of “treason” and “blasphemy” are as serious as they are routine and they often lead to violence: several Geo reporters covering PTI events have been manhandled by Khan’s supporters.

In the public perception, the threats Jang faces point in one direction. Upcoming news channel BOL—the provenance of whose funding remains a state secret—has vowed to decapitate Geo News and poached several of its top people. BOL and Khan are widely considered to be working with the allegedly antigovernment military establishment. And the “nonstate actor” whose complaint led to the four convictions in Gilgit-Baltistan belongs to a militant organization with past ties to Pakistan’s questionably deniable wars. The military denies any involvement in either of the two ongoing sagas, the PTI’s protests and the war on Jang. But perceptions to the contrary persist and do great damage to Pakistan.

For sure, Rahman’s Jang has been an imperfect media pioneer. It may not have spoken up when others were being persecuted by the Iftikhar Chaudhry-led Supreme Court or being media-trialed without proof. Its judgment may not always have been sound, its perceived alliances may not always have been principled, and its campaigns may not always have been the right calls. But none of this excuses the criminal silence of journalists and their audiences over how Jang is being undone. Rahman, Lodhi, Malik and Khattak’s convictions are a travesty. It would be dishonest and self-damaging if we chose not to recognize that.

the owner of this jang group Mir Shakil ur rehman is a world class black mailer, he uses his media group to black the whole country from bottom to the top, once he reached a threshold by hiiting on something harder thn he thought Pakistan’s Premier agencies ISI, on a baseless incident and accusation without any proof, the protests from every corner of the country against the group and in favor of ISI erupted..so jang and geo is actually reaping what they have been sowing since their start of the black business ten years ago…#BanGEO

“BOL and Khan are widely considered to be working with the allegedly antigovernment military establishment.”

There never was nor is any credible information to support this allegation. By publishing rumor, speculation and gossip on a very serious issue (the abuse of blasphemy laws in Pakistan) Newsweek has done a great disservice to objective journalism and cause against the blasphemy laws.

can anyone answer that why a court of an unconstitutional area (Gilgit Baltistan) were chose to punish Jang Group?

Bol or no Bol, don’t weep for Mirs (Shakeel and Hamid), they are too thick-skinned, too cunning for these tactics…and they are not going anywhere

The war is on ! Establishment will severely punish the jang group for trying to put education, openness, democracy on top of peoples agenda. Through Bol or ML, IK or any other tool, the goal is clear “We want our supremacy back”.

Considering Jang and Geo Group a deer in the headlights is a major misconception.. their treachery in Pakistani media is not exactly a well-kept secret. No wonder people long associated with them previously are leaving the organization here and there.. where as Bol, ARY or any other media house is concerned, they are just making the best of the situation after Geo ousted itself as media pariah of Pakistan again and again

The nation stands behind the armed forces and the intelligence services. Jaang group and the people working for it are the type of people that represent everything we should hate and despise – those willing to sell their own mothers, let alone their own country – to the highest bidder. I hope PEMRA grows a pair and permanently takes all Jaang outlets off the air for good. Their assets should be liquidated and the funds distributed towards victims of terrorism. The media outlets like these work hand in glove with the terrorists and the enemies of Pakistan. Delve deep and you will see for yourself.

Pathetic media group, plz!
You did decent journalism for last so many years, why ur master sold his soul n started doing this attack on Ideology of Pakistan?
I feel sorry for these journalists who r like puppets in the hands of Mirs who r dancing on the tunes of Nawaz and that clown is a pet of his Indian and Saudi masters. When you people will start doing a gud journalism n stop this Grey stuff!!!

While in principle, what happened with Jang was wrong, it is simply a case of “what goes around, comes around”. They destroyed many lives with their media trials, labeling people blasphemous and regularly slandering top political, legal and social personalities. Cant it be divine justice? Dont you think someone’s ill wish for Jang Group have been heard by the Almighty?

Issue is that Jang Group was thinking of itself more than a kingmaker, like a God. And God doesnt like that.

It actually doesnt matter to what has been happening to Jang. Other than Kamran Khan, no one big has jumped ship. Kamran Khan was speculated to move even a year before what happened in April-May 2014. Their journalists still continue to mock the system and show their bias. Nothing will change for them. Today they arent saying anything but dont forget, AG, Newsweek Pakistan’s parent group has been a major victim of their bias, misreporting and media trials

What a pathetic article.
This writer should join Geo if not already on their payroll.
Disgraceful article defending a treacherous media group.

I have no doubt Geo and Jhang group gets funding from Outside trying to brainwash Pakistani audience. Ban them

Jang group was a king maker in the country. Now the shoe is on the other foot.