The War So Far 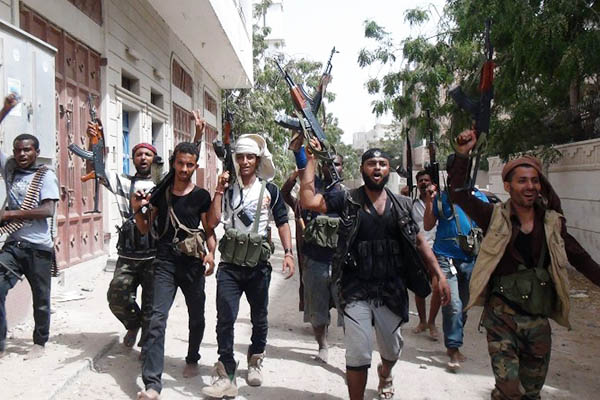 A summary of the past three weeks in the Saudi-led coalition’s war on the Houthi rebels in Yemen.

As a Saudi-led air war against rebels in Yemen enters its third week, the achievements—and human costs—of Operation Decisive Storm so far:

What has the coalition done?

Coalition fighter jets began bombing raids in Yemen on March 26 after anti-government forces seized large parts of the country, including the capital Sanaa, and approached the southern port of Aden, where embattled President Abedrabbo Mansour Hadi had taken refuge.

But the strikes failed to stop the rebels from entering Aden, the scene of intense fighting between rival groups. Saudi coalition spokesman Brigadier General Ahmed al-Assiri said on Tuesday that two or three weeks were “not too long for a military operation.”

A Western diplomat did however credit the campaign with stopping “a possible offensive of the Houthis” on Saudi Arabia.

Who is fighting on the ground?

In and around Aden, rebels face an alliance of Hadi supporters and local pro-army militias known as “popular committees.” Fighters from the influential Southern Movement, an umbrella group that has long called for independence or autonomy in south Yemen, have joined the fight on the side of Hadi, himself a southerner.

The Houthis have also met fierce resistance from Sunni tribes and sometimes Al Qaeda militants, who have exploited the instability to seize the southeastern port city of Mukalla, where hundreds of jihadists staged a jailbreak earlier this month.

How many people have died?

Civilian casualties have soared in Yemen, the Arabian Peninsula’s poorest country that has long suffered from acute food, energy and water shortages. The World Health Organization says at least 540 people have been killed and 1,700 wounded between March 19 and April 6.

Dozens were killed when a camp housing internally displaced people in north Yemen was bombed. A cement plant in the south and a dairy in the country’s west were also hit, killing scores more.

Coalition forces and the rebels have accused each other of carrying out the attacks. UNICEF has said at least 74 children were confirmed to have died and a further 44 wounded since airstrikes began.

More than 100,000 people have been displaced and an estimated one million children have been unable to attend school, it said. Aid agencies are struggling to deliver help to those in need, with Yemen’s airspace under coalition control and fighting continuing around Aden airport.

Riyadh says its coalition aims to restore Hadi’s “legitimate” government and re-launch political dialogue in Yemen, which has been beset by chaos since Saleh’s overthrow in 2012. It is also demanding that the Houthis disarm and retreat to their northern strongholds.

Gulf countries are pushing for a U.N. draft resolution to impose an arms embargo and sanctions on rebel leaders and Washington is stepping up weapons deliveries and intelligence sharing in support of the coalition.

One Gulf official said the Saudi-led campaign could last as long as six months. Saudi Arabia has 150,000 troops deployed along its border with Yemen, but it appears to have shelved plans for a widely anticipated ground invasion for now.